Battle of Topsham 1689 - Beneath the Lilly Banners 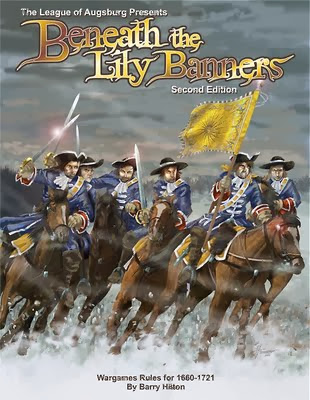 This month was the occasion for our annual Christmas game at the Devon Wargames Group where traditionally we stage just one game that all club members are invited to play. The game is very much intended as a celebration event where the taking part is more important than the result. In addition the members pull out the stops in providing nibbles and beverages to help lubricate the fun on the table.

Our game this year features the 28mm collection of WSS/Glorious Revolution figures owned by Chas and Vince and utilised a great set of rules, "Beneath the Lilly Banners" for a large multi-player game as this was planned to be. In addition our scenario carried on where a previous game staged in January 2012, The Battle of Lavington left off. Thus we have Prince William returning to the shores of England landing in the South West at Topsham nr Exeter gathering new forces to continue the struggle. King James has responded by bringing his army supported by Irish and French contingents to Devon to crush the rebellion before it can get started.

Our game finds the two armies drawn up for battle between the hamlets of Topsham and Lympstone.

Meanwhile back in the 21st century the Devon Wargames Group prepares to go large and get all the toys out on the table.

Chas was our gamemeister for the day and following the arranging of forces and terrain gave the players a briefing on the situation. The table below shows the field of battle from King James' lines with Topsham on the left, Exton in the middle and Lympstone on the right.

There was no shortage of provisions with plenty of nibble and festive food, happily consumed during play. 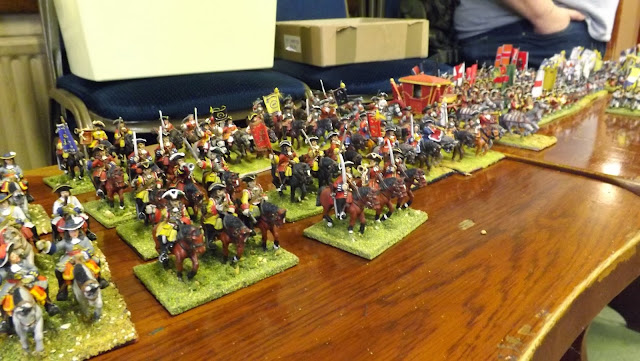 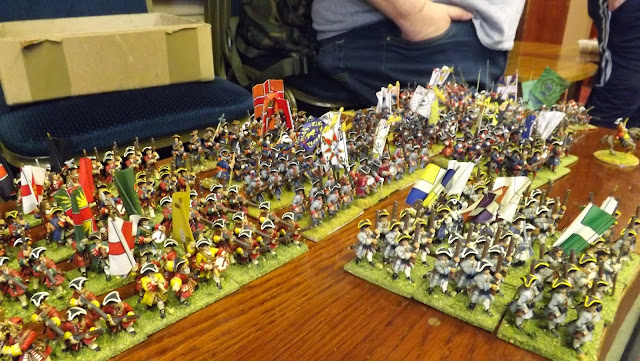 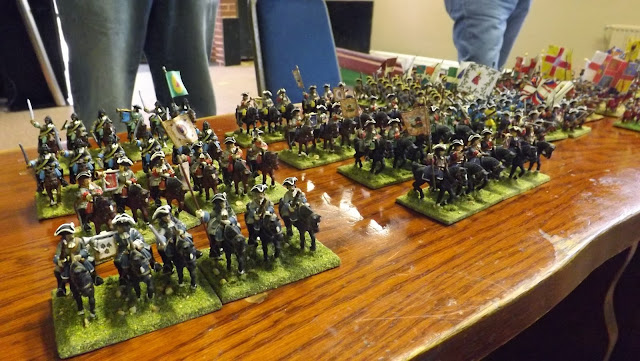 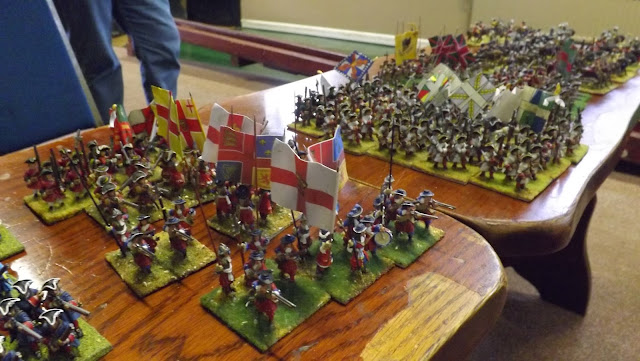 Forces allotted, it was time to deploy, with cards detailing the possible morale grades for the various brigades which needed to be diced for once set up, including the grade of the commander.

Additional cards were distributed, some blank, some with special attributes granted to troops under that commander and some indicating the desire to join the other army and betray former comrades, oh dear, I was that traitor to the cause!!!

The little town of Topsham, on the River Exe, was deemed important to both sides as it was the base for all of William's support from the Netherlands, and would be utterly disastrous if it fell into enemy hands. The game result would be shifted in the favour of the side holding the town. Thus a major victory would become minor, minor a draw.

All players selected a brigade, usually of about three to four infantry battalions, some with a cavalry squadron or two attached. I was initially serving with Prince William's army commanding two brigades of cavalry, each of four squadrons. I was placed in the most favourable terrain for cavalry, out on the extreme left flank facing Lympstone. It was here that the battle's deciding action would occur, and unfortunately for Prince William, my two set up cards told me that I was secretly a supporter of King James and would lead one of my brigades over to his cause, testing each squadron individually to see who would follow me. The other card said I would charge an enemy brigade at the first opportunity gaining a +2 advantage in combat in the first round. 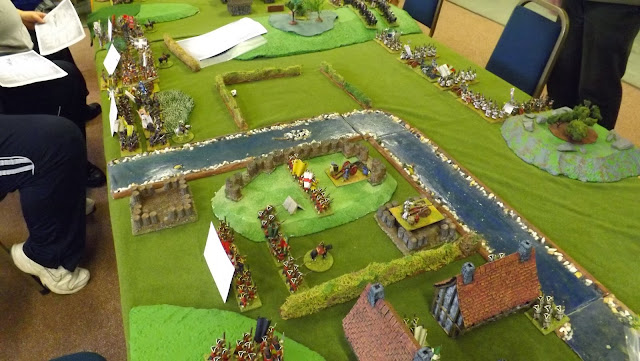 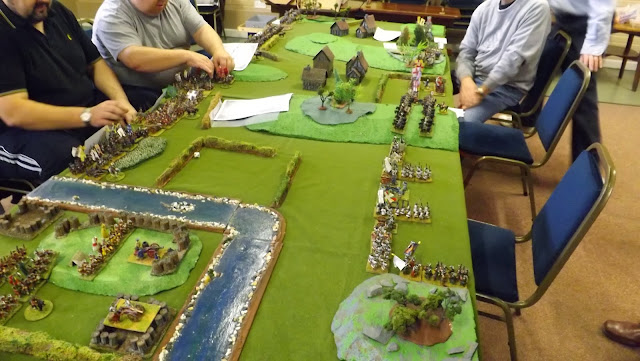 With the terrain generally benefiting the infantry the forces matched each other across the table, with William's army strongly garrisoning Topsham and Exton, the latter with Dutch Guard, who I would end up tackling later in the game. 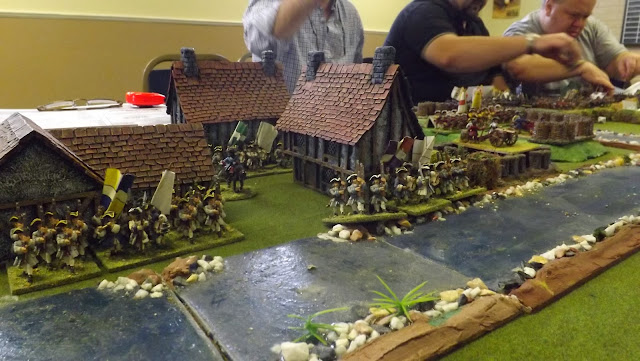 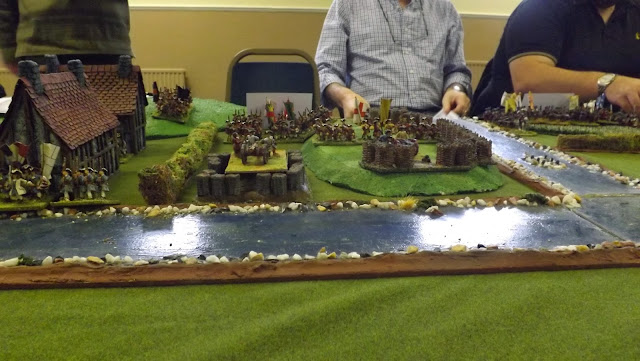 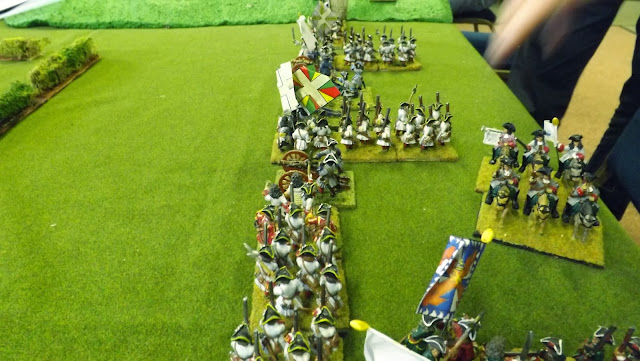 So with forces arrayed both armies advanced on in the centre and the Lympstone flank with James' army masking Topsham with a covering force of infantry. With the bulk of William's cavalry, I advanced on Lympstone sending the loyal brigade on to Lympstone Hill above the village to gain up hill advantage. The other, hopefully disloyal brigade, advanced on Lympstone village, just about to be entered by James' Irish infantry. I immediately attempted to send a courier to these troops commander to advise them of my intentions. However my messenger was intercepted and Prince William was advised of my treachery. 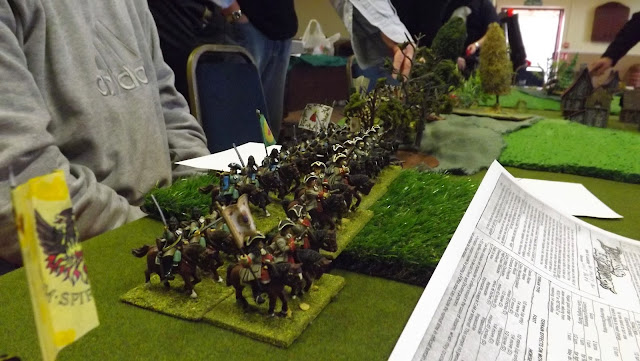 With my treachery revealed there was no other option other than to order my brigade to follow me in a wheel and attack our former comrades flank on, on Lympstone hill. Needless to say the Irish brigade in Lympstone were a little surprised to see this move, and given the long range did not open fire. 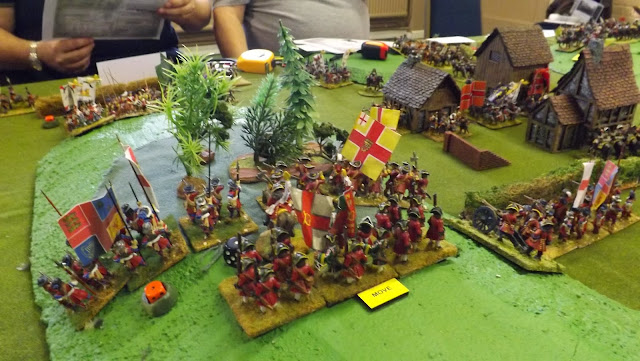 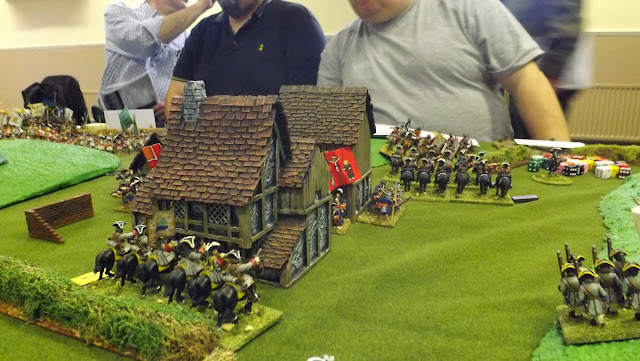 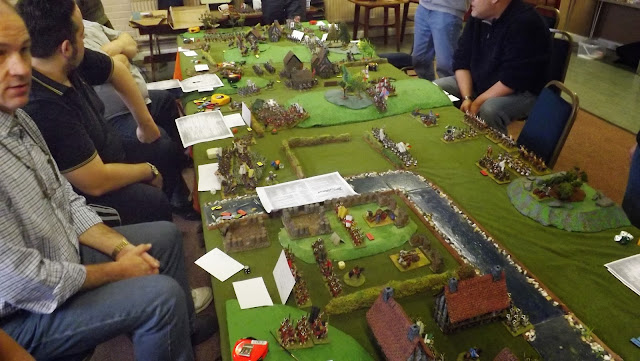 The loyalty check complete all four of my squadrons charged up the hill and smashed into William's loyal squadrons. Three of them decided discretion was the better part of valour and withdrew immediately. One however contested the attack and found the +2 advantage to my men was irresistible. 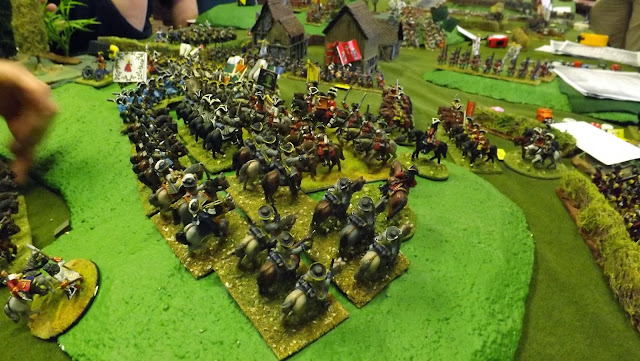 The cavalry battle went back to and fro for a few moves, but in Lilly Banners cavalry squadrons get used up quite quickly and with the balance in favour of James the flank combat shifted towards Exton in the centre tenaciously held by the Dutch.

The battle for Exton became a protracted affair of musketry as the elite infantry of both sides swapped volleys in a battle of attrition where weight of numbers would be the decider. It was James who held the advantage as William had been forced to commit his reserve in a desperate attempt to shore up his left flank. 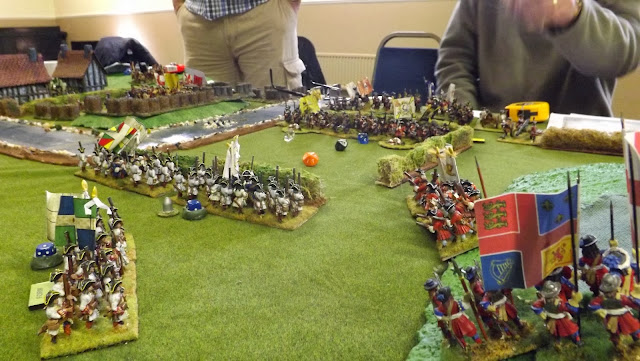 You could almost hear the sigh of resignation as the Franco-Bavarian brigade of King James' reserve deployed in front of Exton and advanced on the badly shot up and depleted Dutch. In three turns it was over and despite a last minute attempt to break out of Topsham, Prince William conceded defeat. 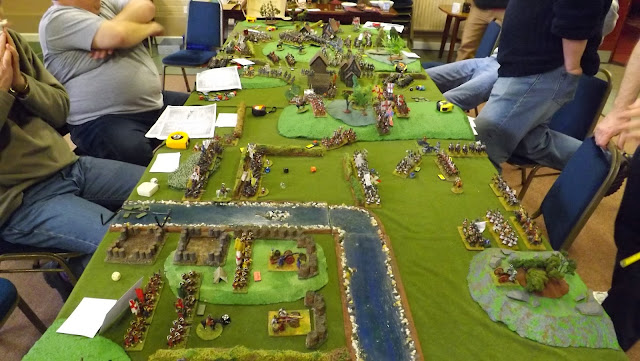 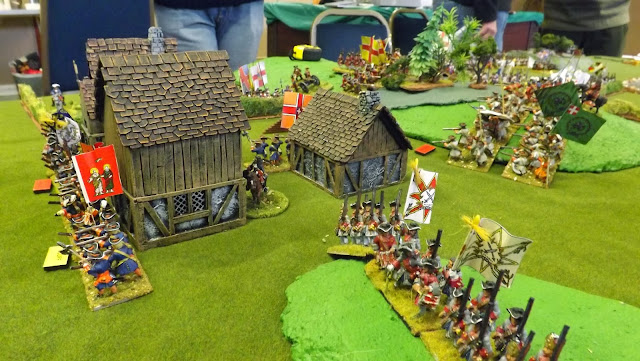 Much fun was had by all, and many thanks go to particularly Chas who had the job of cat herding for the day as he arranged the scenario, set up the game and got everyone organised about what they should be trying to do. 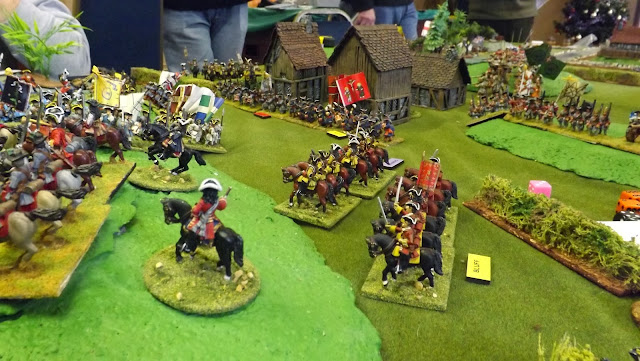 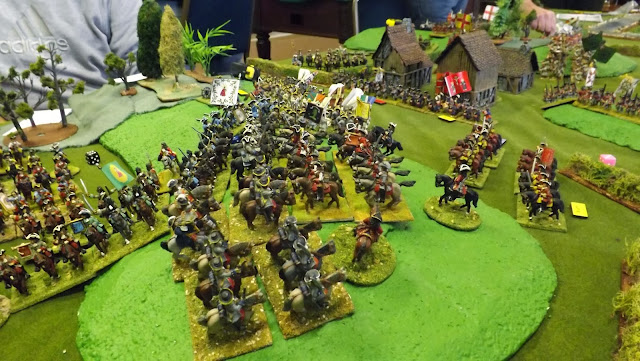 So another year comes to a close for the club. Next month, January 2014, we are planning some WWII Chain of Command action and some ACW Fire and Fury. In addition there will be some fun with James Bond and characters to report on as we get in some gaming in North Devon at Chas's between Christmas and New Year. 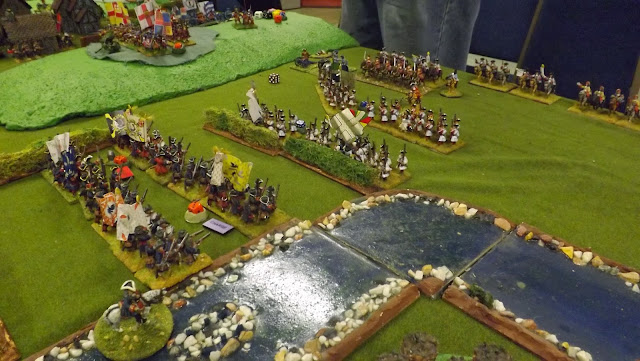