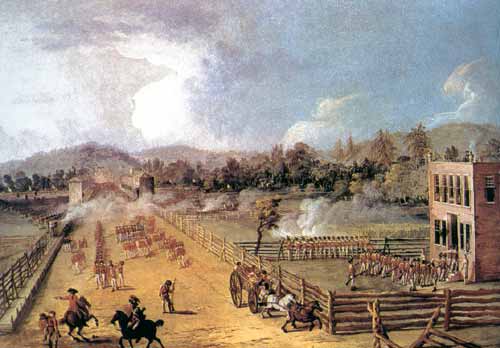 Got the chance to put on the above at the club on Saturday, having purchased my good friend JJ’s AWI collection last year. 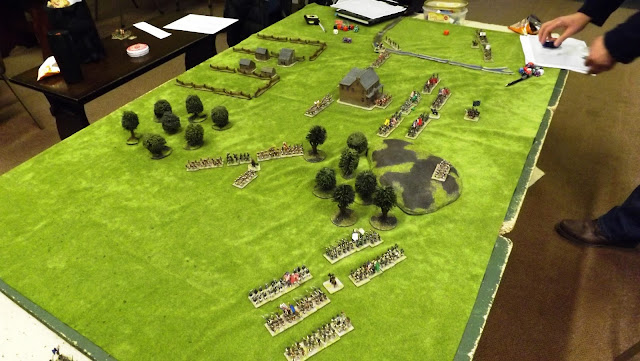 I’d always admired the collection, so when the opportunity came up to grab a bargain, I couldn’t resist! 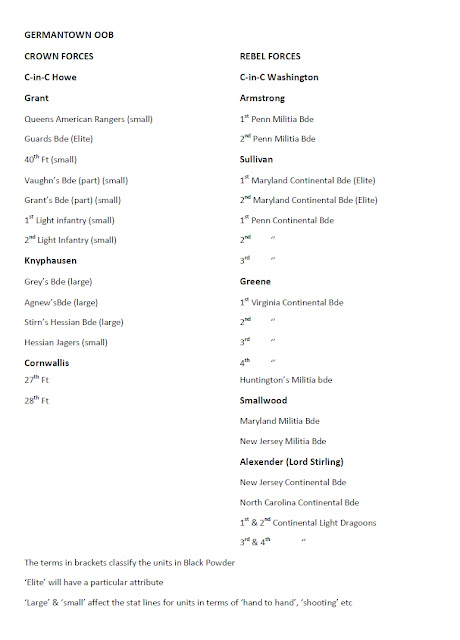 Jon’s figure collection is quite old (Original Polly Oliver in the main, JJ ), and he says his painting style has changed a lot, but I like them. 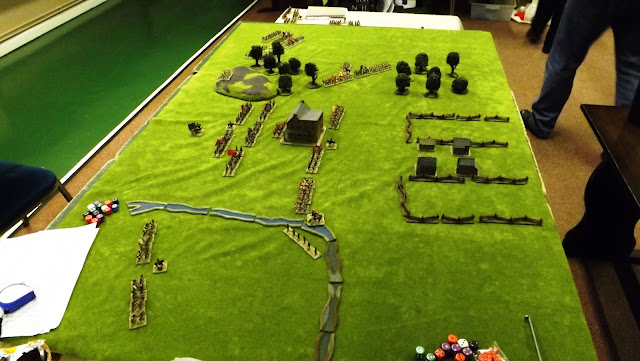 As a club, we’ve played with most variants of the Black Powder (BP) rules; ‘Hail Caesar’ quite recently last year, ‘Pike and Shot’ earlier last year and BP with a few house rules for  Balaclava in the Crimean, our summer game ‘big bash’ in North Devon a few years ago 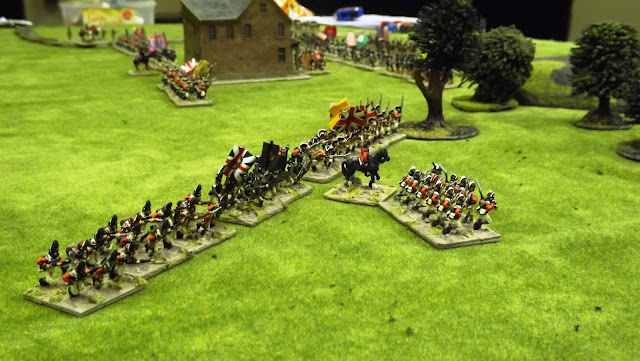 I’d put on a game using the ‘Albion Triumphant supplement for the Waterloo period a few years ago, and that’s been the only time the club felt they hadn’t really worked.

I’d picked up the ‘Rebellion’ AWI supplement previously, so was keen to try them out. I think it’s a really good supplement, loads of information on the period; historical background, details of the forces involved, a short piece on weapons and tactics and an overview of the main commanders ‘of note’. Over half the book though is made up of scenarios, nineteen in all, featuring all the major land engagements of the war, plus others.

Looking though the scenarios, and comparing them with the forces I had purchased, I settled on Germantown, 4th Oct 1777. This sees Washington develop an elaborate plan to march five columns of troops, over different roads, to arrive at the encamped Allied force simultaneously. Needless to say, historically it didn't work (hindered even further by thick fog) and not surprisingly, that was repeated in our game!

I used all the detail from the ‘Rebellion’ supplement to generate the scenario. I like the different stat lines attributed to each unit, which can reflect their ability to melee, shoot, recover morale (saving throw) and become shaken (stamina), plus the ‘added extras’ to reflect increased morale, better shooting or hand to hand qualities. All these can be ‘tinkered with’ if you don’t like the author’s interpretation! 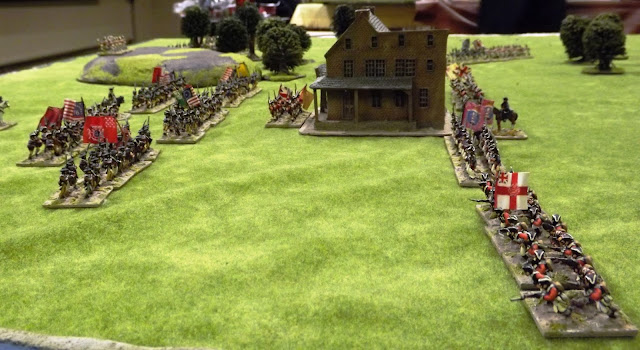 Each commander is also allocated a ’staff rating’, which is basically their ability to get things done, rolling equal to or less then their rating on 2D6. Again, if you don’t like them, change them! In this scenario, all commanders were rated as ‘7’, which is pretty average, but presented a few challenges for the rebel/patriot forces (depending where you’re from!)
These are ‘as is’ from the book and also show the ‘order of battle’ for each force.

So how did it play? On the day, due to the other games going on, it was down to another long standing war game mate Vince and I to give it a go.

Things didn’t start well, when Sullivan failed his first command roll! In the scenario, all his force must be ‘on table’, before Greene & Armstrong can start to arrive, and only when they’re all on can Stirling and Smallwood attempt to enter.

Once Sullivan is on, and engaged with the British front line, then the forces of Knyphausen and Grant can start to react. Cornwallis is available once British units become destroyed or ‘shaken’. This never happened! 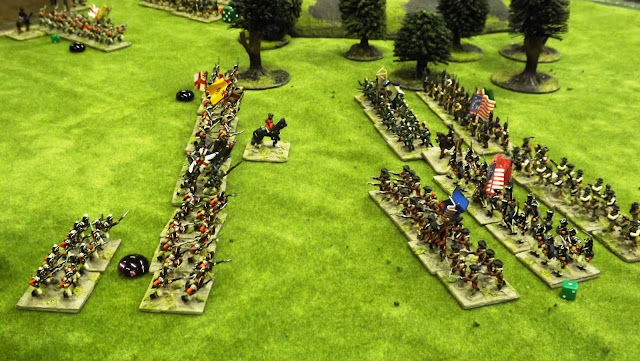 Sullivan and Greene managed to get all their troops on in fairly good time, but Armstrong was clearly affected by the fog! This was to be a factor throughout the game!

In the meantime, the 40th Foot had occupied Chew house as they did historically, and there they stayed! Again historically. Knyphausen moved the remainder of his force up in support of the 40th, pushing the jagers out to his left flank to delay the militia with the long range of their rifled muskets. Grant moved to deploy between the woods in support of the 1st Light infantry. The 2nd were left to fend for themselves! 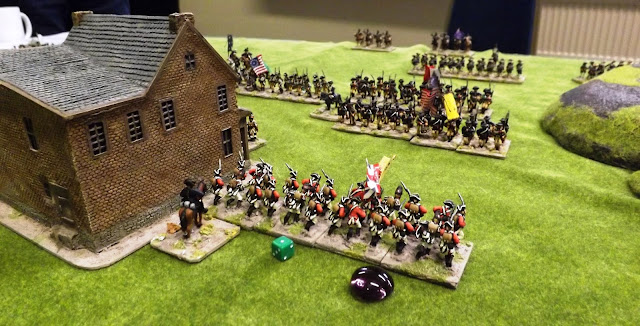 Eventually, all the rebel force entered the table, although Armstrong was still affected by the fog and there was a similar story on the other flank with Smallwood! Sullivan attempted to force the issue by charging Chew house before the supporting forces arrived, knowing he was being a bit rash, as the defenders were bot suitably depleted. This proved to be the case, as although the first round was a draw, he was thrown back in the second.

This was the ‘high water mark’ of the rebel forces, as it became pretty much a shooting match with Sullivan facing Knyphausen and Greene facing Grant,  a match the rebels were unlikely to win! Not helped by the fact that yours truly had deployed in ‘double lines’ not allowing the superior numbers of rebels to come into action (too much Carnage & Glory JJ!!)

So with rebel units starting to disappear at an alarming rate, and the British force only carrying one or two casualties per unit, we agreed that it was time for the Rebels to withdraw, pretty much as they had historically!!

I enjoyed getting my ‘new’ figures out on the table and thought that the scenario gave a good game. Vince and I are old adversaries, but the game was played in good spirit, with reference to the rules when required, which usually gave the answer. 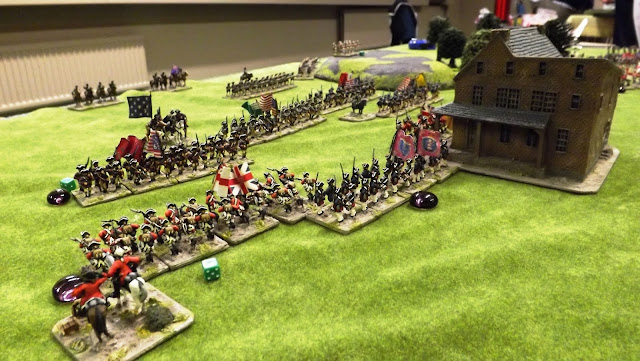 I must note that I didn’t cater for the fog in the scenario; there is the ability to introduce variable ranges based on a dice roll and potentially have the rebels shooting at each other (which happened historically.) I’ve also seen a scenario where the British are required to roll on their command rating to raise then from their slumber, which may make for a more interesting slant.


I would definitely play this one again; it’s very much suited to multiple players
Posted by carojon at 18:33