Attack on Le Haut Perrier - I Aint Been Shot Mum

This scenario, entitled "Let's get at the Bastards" - Scenario 12 is taken from the "Cymru Am Byth" Welsh Guards at War scenario book produced by the Too Fat Lardies

and you can link to more details about both at JJ's Wargames in my post that preceded the game.

Taken from the Welsh Guards Regimental History;
“About half-way to the village a line of hedges crossed their front leading on the left into a sunken
lane. No.7 platoon now occupied this hedge-line while Leuchars went to contact No.8 Platoon, who
were farther forward on the left of No.7. They had reached the outskirts of the village and had
silenced a machine gun post when two more opened on them and held them up. One of the Scots
Guards tanks supporting them was blown up on a mine, but the crew managed to escape and
continued to fight as infantry for the rest of the battle. A dug-in Panther and a mortar were also
spotted and Sergeant E.Williams moved his platoon back to the sunken road.

Meanwhile Lieutenant D.J.C. Stevenson with Sergeant R.G.Fowles and five guardsmen had made an eventful sortie from No.7 Platoon. Re-crossing the main road, they had crept forward to the first two houses, knocked out a machine-gun post and killed two snipers. They were about to rejoin their platoon when a nearby Panther sent an armour-piercing shell into the house they had cleared, and killed Guardsman W.E. Bowen who was standing with his back to the wall; the rest got back safely. Shortly after this the enemy put down a mortar concentration mixed with smoke which screened the village and suggested that either a counter-attack or a withdrawal was being covered. While the smoke lasted the company could see little, but the Scots Guards tanks worked out to their flank, spotted three Panthers moving and promptly knocked out all three. The Company were loud in praise of the work done by the 3rd Battalion Scots Guards that day – ‘Even when their tanks were hit (they lost two) they came and joined the infantry. One Lance-Sergeant borrowed No.7 Platoons PIAT to go and deal with a Panther which had knocked out his tank. He came back with his hand bleeding and the PIAT in pieces. Then he grabbed a rifle and went back again. That was the last I saw of him.’

“When the smoke-screen lifted the company advanced on the village and entered now without much
opposition, killing a few Germans who remained and taking nine prisoners. No.8 Platoon went to the
far end of the village and hardly reached their objective when ‘the ominous clank of tank tracks was
heard on the road, and round the corner of a hedge came one more Panther. Its huge gun was
swinging from side to side, the tank commander was looking out of the top and had obviously seen
nothing. The first two shots from No,8 Platoon’s PIAT missed, but the third hit it squarely beside the
driver’s seat, a loud explosion occurred and immediately flames burst from the crippled tank. In a very few seconds the fire was ranging and ammunition started exploding. Only one of the crew got out and he was promptly ‘seen off’ by a light machine gun. Nobody was in the mood for taking prisoners.”

The picture below, taken on the IPad, shows the five German platoon group positions, corresponding to the map above with the British set to enter from the northern table edge.

Map & Terrain
Le Haut Perrier is nothing more than a minuscule collection of farm buildings that does not even feature on the smallest scale maps. Its importance was due entirely to its position atop a rise in the rolling terrain that gave excellent views across all the surrounding countryside.
The hedges are relatively light, whilst the farm buildings are of solid stone construction and provide good cover. One of the lanes running east west is partially sunken on the southern side, this will provide good cover for any troops in it. 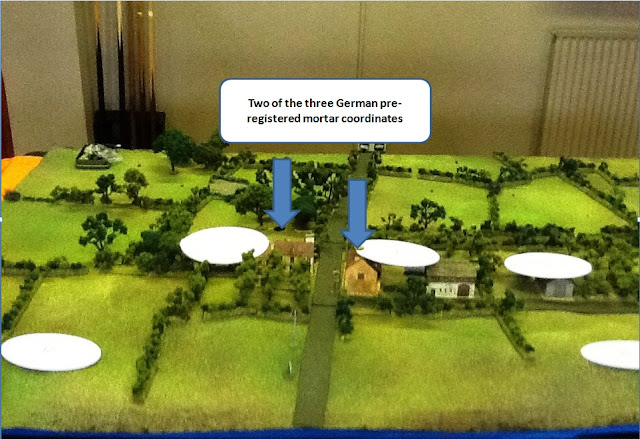 Panzer One - Morale 3
Three Panther A tanks, dug in

HEAVY ARMOUR: Some tanks, such as the Matilda II, Tiger or Churchill may be designated as having particularly heavy all‐round armour protection. These tanks will roll one additional Armour dice when fired at from the flank or rear.

As part of the setting up for this action and given the very cluttered nature of the terrain I wanted to keep the use of blinds to a minimum so had the Germans set up their platoon blinds out of sight of the British players and photographed their set up on the IPad together with the positions of their pre-registered mortar strikes.

Once recorded all the German markers were removed, using the IPad as a reference and thus the British were presented with an empty battlefield with just their blinds moving across the fields, with the Germans able to spot from their hidden positions.

The German's opted for a balanced three up (6 x dug MG42 MMGs) forward in and around the farm, with Panthers on each flank, the right flank being dug in.

The British attack plan rather presupposes a move to bring the force to bear on a point in the German line looking to overwhelm it quickly and take out the other parts piecemeal, as is what happened. The tricky bit is getting to grips with the defenders without suffering too much on the way in, and there as the Great Bard would say "lies the rub of it".

As the British forces entered the table using their two dummy blinds to disguise the line of attack, the German defenders spent the first few turns scanning the hedgerows down hill trying to spot the obvious sounds of enemy tanks and any supports.

Very soon the first Churchill tanks were spotted looking like first year débutantes nervously making their way towards the dance floor. As well as tanks, the first two platoons of British infantry were soon spotted moving, two up, looking to get to the cover of the sunken lane.

Radios crackled within German lines as the dug in Panthers on the right flank opened fire on the lead Churchill troop. The first shot ploughed harmlessly into the ground in front of the first vehicle causing an urgent rebuke for more care  and attention from the SS tank commander to his gunner.

The gunner responded with a round that smacked into the front of the first Churchill and shot vertically upwards leaving the enemy tank unharmed. However the Scots Guards troop leaders relief was soon short lived as the other two Panthers opened up with aimed fire at the other two tanks in his command.

Their armour saved them from complete destruction, but left one immobilised permanently and the other temporarily but with impaired movement, plus the shock to their crews didn't help with their chances of returning the fire. Not surprisingly when they had their opportunity to respond the first vehicle smoke rounds appeared to their front aimed at giving them some respite.

The poor old Welsh Guards were were getting a bit of battle inoculation as their lead platoon suddenly found themselves under mortar fire as they crossed the open field to their front, causing the survivors to sprint to the cover of the hedge on the sunken lane looking to regroup.

The dash to the hedge line only served to be a jump from the frying pan into the fire as two previously unspotted machine gun bunkers opened fire on the hapless Guardsmen, adding to their distress with further casualties and shock.

The British infantry commander was desperately in need of a bit of support from his "tankies", but they had a fight of their own going on, whilst aware of the need to close in on the German machine gun nests and help suppress them.

Meanwhile the second Guards infantry platoon taking advantage of the attention being paid to their comrades took advantage of it to make their way forward on the German extreme right flank, making the sunken lane pretty much intact.

The Guardsmen were well aware that they had to break in amongst the cover of the buildings while using some of the tanks to keep the Panthers on the hill focused in their direction whilst also using some to support the infantry.

Making use of the smoke from the first tank casualties together with that of the defensive smoke rounds laid, the second troop moved through their comrades and brought HE fire onto the German MG nests on the sunken lane causing casualties and shocks.

The Welsh Guards used the respite given by their tanks to regroup and add to the pinning fire as one section sprinted over the lane through a neighbouring orchard and took the first MG nest in the flank and rear.

Whilst the attack in the centre was going on the third troop of Scots Churchills duked it out with the dug in Panthers, causing multiple hits on the enemy platoon commanders vehicle but remaining one shock away from causing the German commander to bail out.

Whist the German tanks were occupied with this duel, the second platoon of Welsh Guards desperately tried to plant a PIAT bomb onto the nearest German tank from their position on the sunken lane, but it struck harmlessly against the earthwork around the tank.

Sensing the distress of the British attack the SS commander pulled in his forces from the German left to counter attack the Guardsmen. This saw the second Panther platoon edge their way towards the flank of the British tank attack whilst two MG42 teams relocated into the farm barns to secure the centre.

The Welsh Guards section that had cleared the first bunker then took out its neighbour and got a lodgement in one of the barns, but by then the attack had stalled with too many infantry casualties littering the nearby fields and the Scots looking likely to be caught in the vice of two platoons of Panther tanks one on each flank,

And that was, as they say, that with the British attack stopped in its tracks.

This game was bad day at the office for the Brits, with their attack managing to find the dug in Panthers rather than their mobile comrades, and with their dice failing miserably to save casualties, only by an uncanny ability for the Germans to do the opposite.

I think we were generous on the cover we gave the British moving through the hedges and trees that break up the terrain; usually making them an 'okay' to 'poor' target on the IABSM fire table. On reflection I would make the sunken lane a 'poor' target environment along its length in front of the farm giving a jump off point for the Brits that make it across the field to the front of the buildings.

The Churchill proved a tough opponent taking hits that would automatically brew Shermans and Cromwells and the use of 'Engage' orders with aimed shooting certainly kept the Panthers on the hill busy fending off their shots.

A very nice afternoon spent battling in the Normandy countryside provided great sport before the rugby match of this year's Six Nations competition was caught up with in the pub afterwards.
Thanks to Ian, Steve, Steve M., and new member Bob for providing the entertainment.
Posted by carojon at 10:38