With the grim prospect of a 20th Century only day at the Devon Wargames Club this March, it was down to me to save the day, either that or I could stay in and save myself the petrol money and spend it all on sugary drinks. However a trip back to civilisation was necessary as despite my success in forcing my remaining relatives to buy me some birthday presents I had singularly failed to make them actually post any to me, a bit of thinking was now required on what I could put on at the club so that I could make the most of my journey. 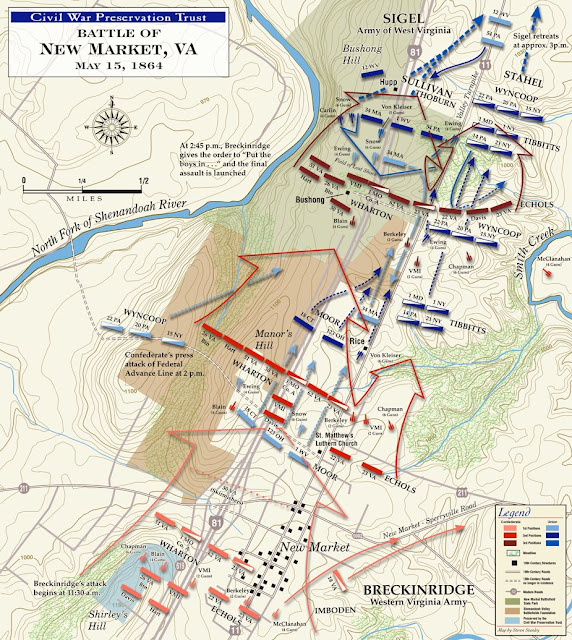 I chose to play one of the scenarios from the Fire and Fury website
http://www.fireandfury.co.uk/scenarios.htm 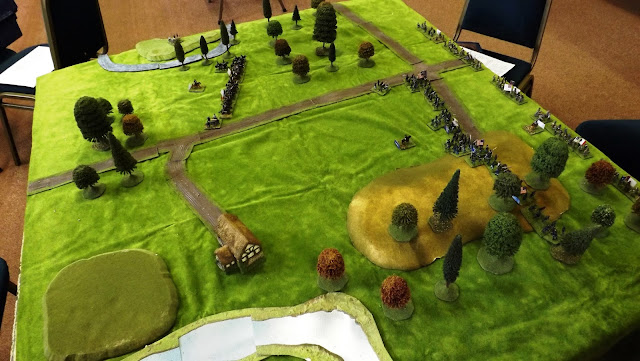 I had no previous experience of any of these games and they all appeared to be designed to be played on a small 4' x 4' table which initially seemed a bit odd but actually worked out very well. I also wanted to play a stand alone battle rather than a section of a bigger one and so picked out the Battle of Newmarket. Given my vast knowledge of everything I already had a vague idea that it was a Union defeat and that some idiot was in charge which therefore made my choice for this as a club game ideal.

In 1864 Grant ordered Maj.G. Franz Sigel to support his offensive by clearing out the . Initially he faced little resistance until Maj.G. John Breckinridge formed whatever troops he could muster into a force to stop him. They met near New Market, Sigel had placed skirmishers out in front and so Breckinridge attacked and drove them back whilst sending his cavalry around to the right.  Continuing the advance the two main lines drew near and engaged in firing at each other, over time the more numerous troops were getting the upper hand and Sigel decided to attack and finish them off. Under pressure Breckinridge reluctantly ordered in his last reserve, the Virginia Military Cadets, to plug the gaps in the front line and combined with the seasoned veterans along side them they managed to stem the Union advance. Sigel's attack faltered and with the Cadets in the lead, the Confederates attacked again and broke the Union line, winning the day. 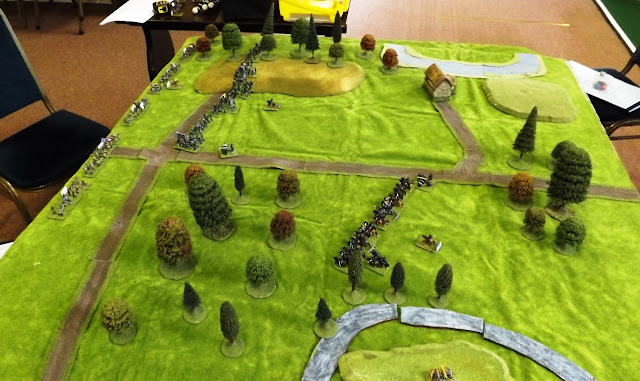 Soundly defeated, Sigel withdrew, (to be replaced by Hunter) and left the Valley still in Confederate hands until later on in that year when Philip Sheridan was appointed by Grant to do the job properly.

Our game starts with the Union skirmishers falling back under pressure from the first line of Confederate infantry. The scenario does however leave a few things unclear so we had to make some assumptions. 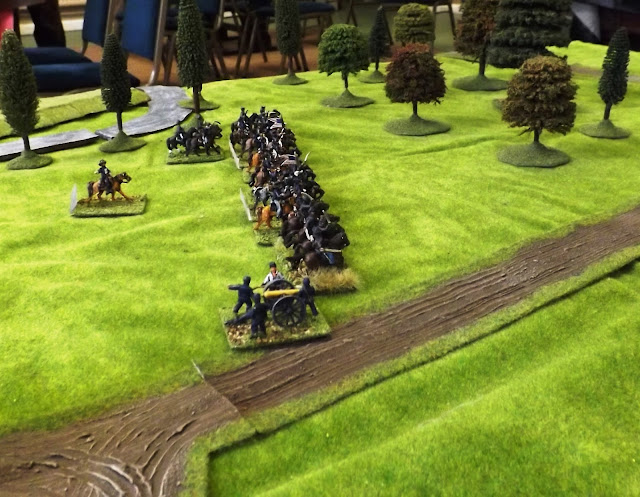 None of the artillery is allocated to a command so that means the Corps commander has to give them orders, as neither of them are on board at the beginning of the game we allowed the to start limbered if required so that they could escape with the infantry. The Confederates obviously chose to be un-limbered given their starting position.

Union cavalry would be armed with breech-loaders by now but we decided against it, I would suggest anyone else should do the same. 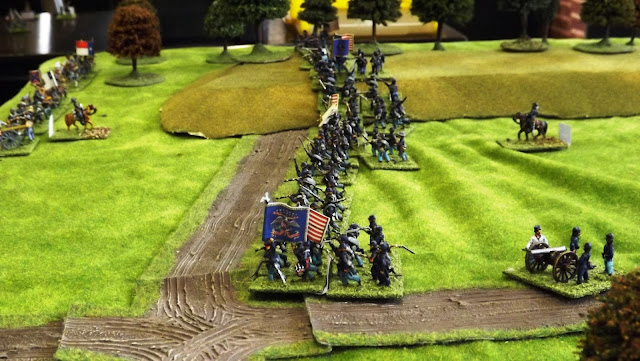 Steve H was playing as Sigel and Steve L was Breckinridge.

The Union have to retreat everyone back to the road/farm house line before they can go on the offensive and Steve H managed to get all of his activation throws to be at least a 5 or more and so managed it easily, Steve L brought all his troops on table and gradually advanced under gun fire up to the Union Line, by the time he arrived, there was now a double line of Blue coats waiting for him. Combined with the copious quantity of 9’s Steve H had been throwing to whittle him down on the way in, it was agreed that he was doomed and we ended the game.

After a chat we set it up again, I took over as the and Steve H volunteered to be the Confederates. 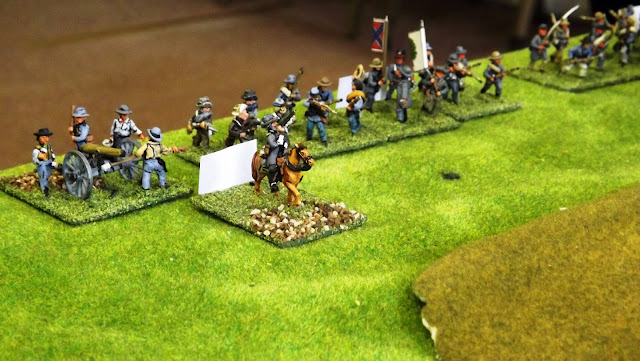 This time around both of my two front units failed to move at all and so got charged by ‘ordes of ‘orrible Rebs , needless to say only six stands out of fourteen eventually made it back to the safety of my line, fortunately the other two units just about made it back in one piece. 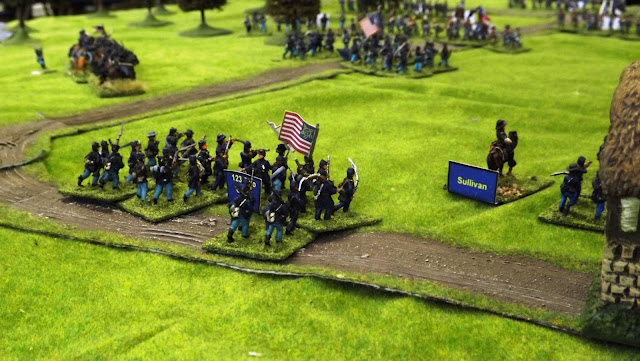 We now had the same scenario as in the first game and I suppose to some extent, as in the actual battle; a Union line waiting the Rebel attack .My guns had also been thinning out the Rebel advance until that is, I threw a 10, which was a little inconvenient and so with the two sides standing off against each other Steve very kindly agreed to make a game of it and threw in anyone that could reach. Somehow the Union line held mainly through their weight of numbers, meanwhile my uninvolved troops/guns continued to fire into various rebel units skulking behind the fighting, softening them up for later, it was about now that the VMI cadets were shot to bits by another 10, shame. 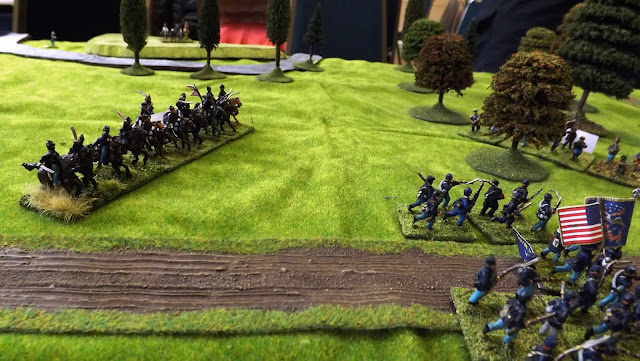 As my two big original units hadn't made it back in a state to be of any use other than supports, this meant having to charge in instead with the green 12th West Virginia, which unfortunately was both low on ammo and disordered, it didn't go well. Fortunately to their right my centre had by now thrown back the rebels they were fighting and in their turn heroically counter charged, sweeping them from the field and then smashed into the softened up troops behind.

There were just too many Union units and no large Rebel ones at all so weight of numbers told again, I pushed back what was left of the Confederate infantry, even the 12th West Virginia managed to win against some weakened dismounted cavalry.

This game went right to the final 8th turn and the remaining Union Brigades were just over the required invisible line to give me the additional victory points on offer. 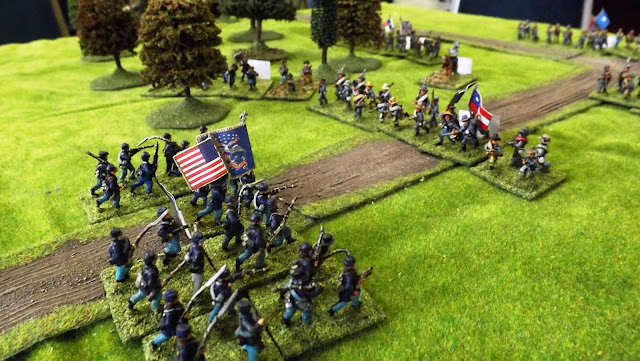 If Steve had sat back and made me attack him as Siegel had done then I am not so sure how it would have gone given my initial losses however his extra VP’s were behind my defensive position so it might have been closer than we initially thought . 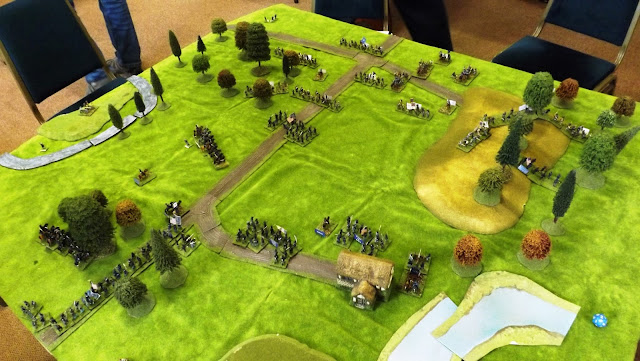 Overall then not bad, second time around that is, and now that I have written up the actual events then the scenario does appear much more understandable. It does to some extent depend on how many Union Brigades make it back as the Rebels don’t have anything over five stands big in their army. 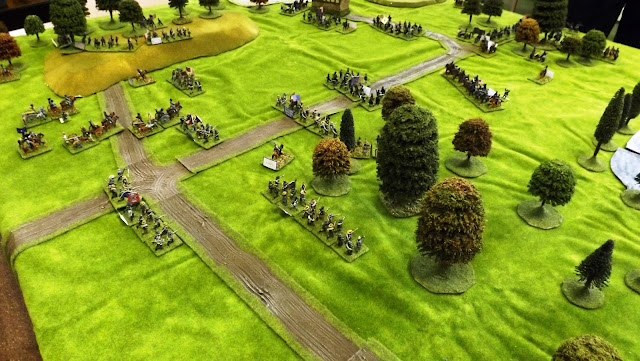 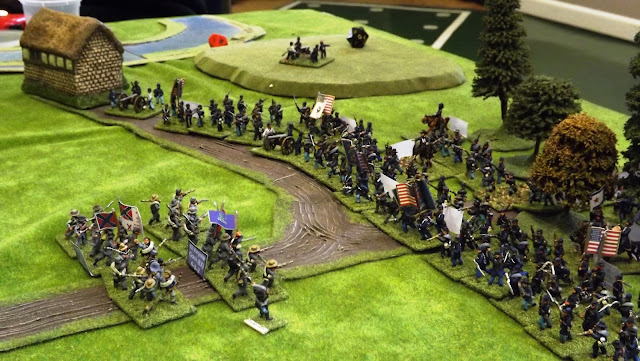 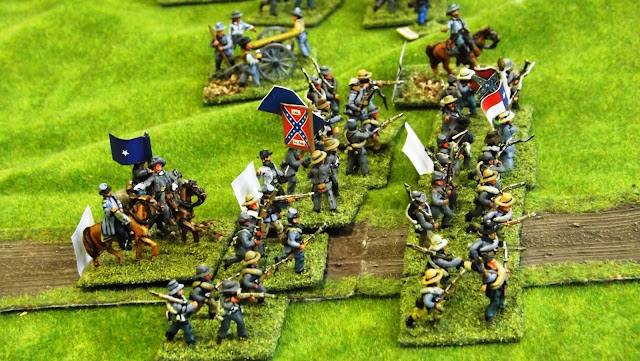 Whilst researching the game I did find an alternative version on the Net from “Iron Brigade “written by Mike Willegal (pages 17-19) which you could use instead for the set up. (Watch out for those breech loaders!)

This has been a Mr Steve production.
Posted by carojon at 17:08