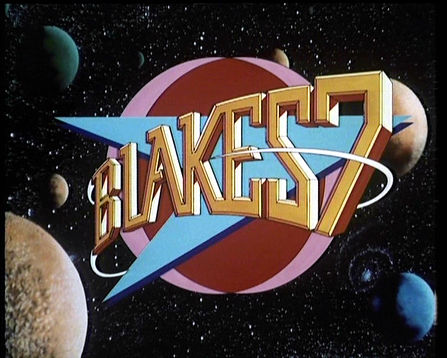 For a change of pace Chas took us to the third century of the second calendar, this month. The game was set around the Federation Communication Base on Shuryan Major.


Rebel leader and galactic traitor Roj Blake had roused rogue elements on the planet and planned to lead the crew of the Liberator in a co-ordinated attack on this isolated Federation installation. The plan had been prompted by intelligence suggesting that Supreme Galactic Commander Servalan would be visiting the site. 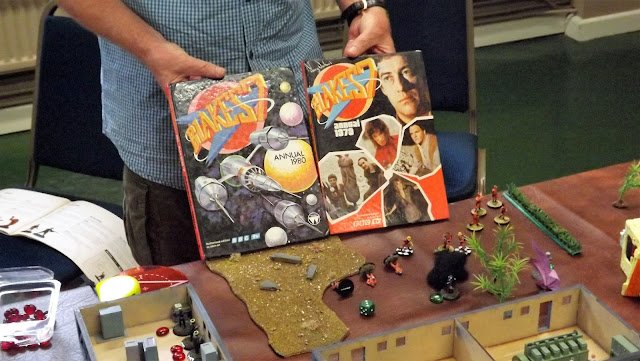 Information received, pointed to at least one Servalan double accompanying the leader, to divert attention from the real Commander's activities.

The rebel plan was to storm the compound with local forces in tracked transport units, debus and destroy the installation. With Federation troopers occupied, Blake & co. would teleport into the base, in an attempt to kill or capture Servalan.


The game started with transit units entering the complex from either end of the base. As Federation soldiers approached the vehicles to inspect their transport authorisations, a hail of fire was directed at them and the nearby buildings from the mounted assault force. More rebels arrived on foot and Federation forces were quickly under pressure from all sides. 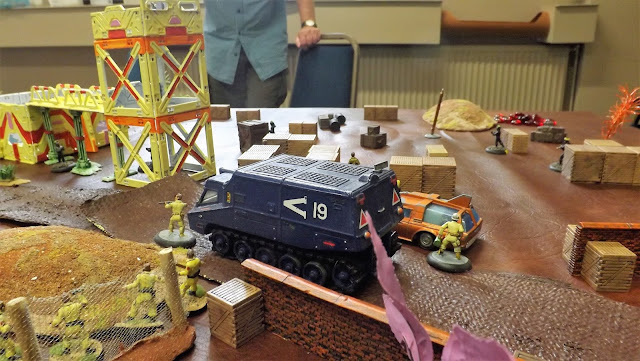 It quickly became apparent that Federation troops were deployed in defensive positions and were on alert. Could they have been expecting trouble ? 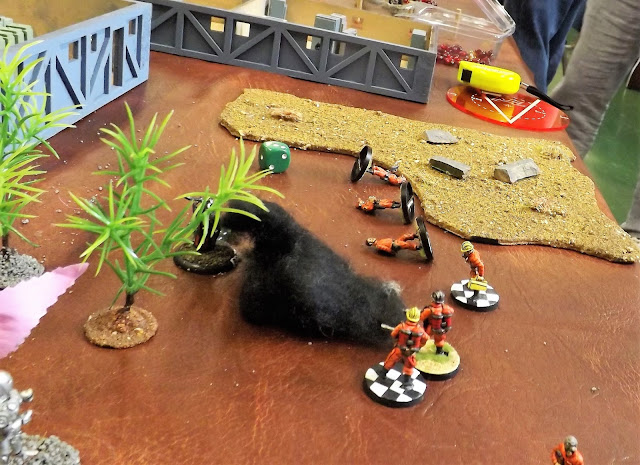 Boiler suits clad rebels and Federation troopers were quickly dropping like flies and one rebel attacking force was caught in the crossfire from three Federation positions. Seeing the danger, Liberator crew members began teleporting into the fight. Jenna used Orac to take over control of a Federation robot and used it to blast the opposing forces. Travis was wounded by a large group of rebels and only just made it to the safety of the generator room. 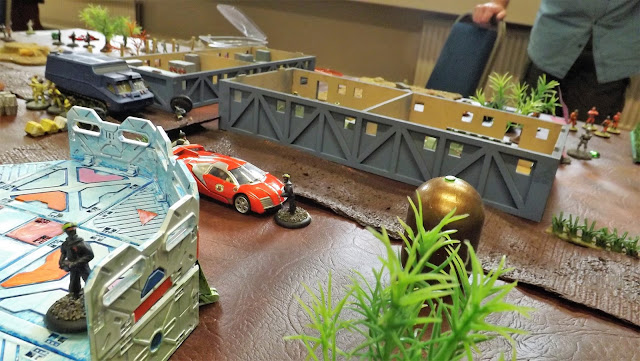 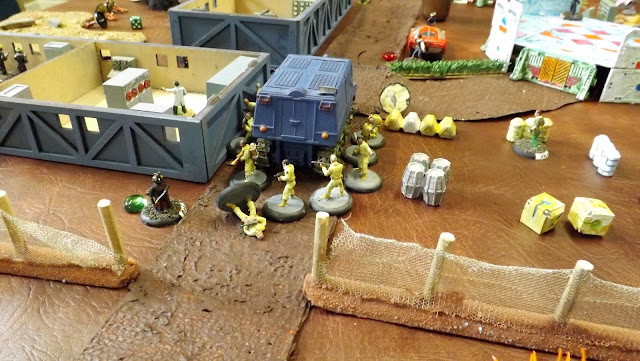 On the other side of the complex Federation forces were faring badly. A large group of rebels forced their way to several complex buildings and blew up a communication tower with satchel charges. Servalan's mutant guards fired on them from the windows of one building, but their shooting was ineffective. Just as explosives were attached to the wall of a building, a rebel flamer toasted several
rebel attackers. A Fedsec agent had infiltrated the rebels and was now engaging Villa, Avon and Gan, as Villa worked on the opening the door to the control centre. Then Gan fell to fire to her fire. 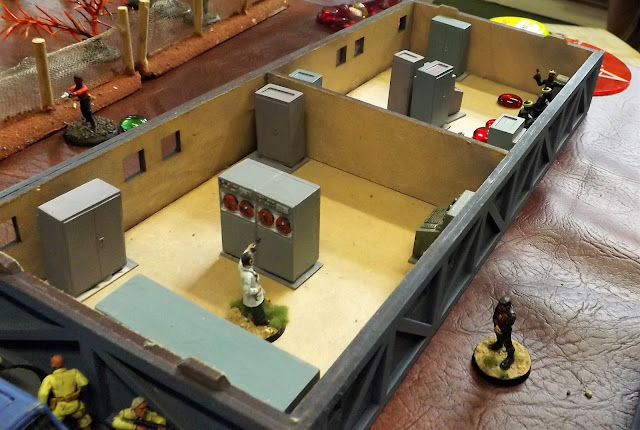 The explosives now blew a hole in the opposite side of the building, killing Servalan and two troopers. On the opposite wall, Villa picked the lock and opened the door. Now Servalan's guards were taking fire from both sides and they were quickly gunned down. Villa raced to check "Servalan's" body, only to find it was one of her "doubles".

Meanwhile, over the other side of the table, a satchel charge blew a hole in the wall of the generator room and another "Servalan" was seen taking cover behind a generator in the adjacent room. Two Federation troopers died as the rebels rushed in and Travis rushed out ! It really was not his day, as he darted into the room "Servalan" was in. At this point more troopers fired on the rebels through
the hole in the wall the rebels had just made and Deyna was killed. 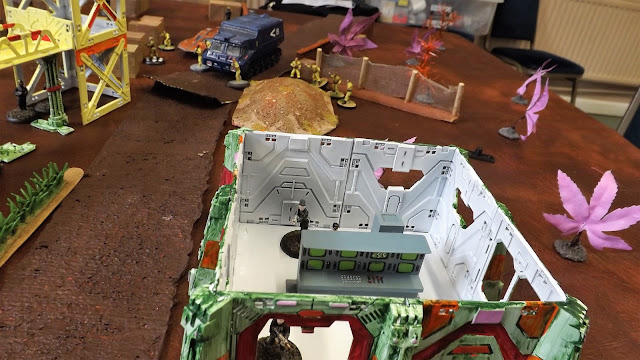 More Federation forces jogged into the complex, firing on the rebels from behind. Judging the situation critical, Blake teleported in, next to Jenna's body and retrieved Orac, only to be wounded by fire from his rear.

With deadly crossfire from Federation forces making movement suicidal, Blake gave the order for the surviving crew members to teleport back to the Liberator. He blinked out, just as a squad of Servalan's men raced round the corner. 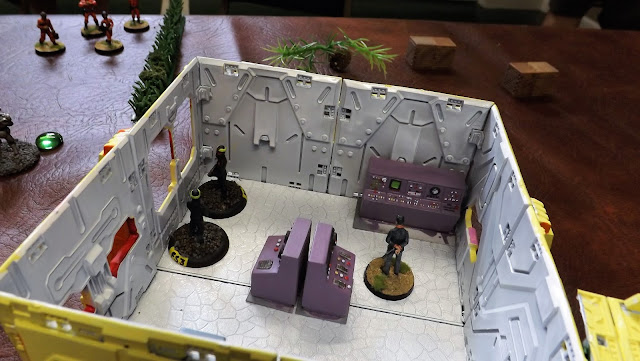 The remaining rebels attempted to withdraw, but many were cut down or taken prisoner by the Federation. 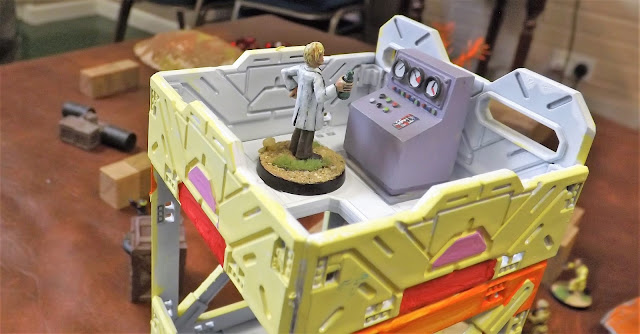 The following report appeared on the Federation newcast:
Today, on Shuryan Major, Fedsec forces crushed an attack by the rebel leader Roj Blake and his gang, on a government orphanage for disabled children. This terrorist outrage on such a soft target, is typical of the behaviour we have come to expect from this group. Commenting on the attack, Supreme Galactic Commander Servalan said "Once again these so called "freedom fighters" have shown themselves in their true colours. What they hope to gain by killing innocent disabled children one can only imagine, but I am pleased to say their actions were quickly dealt with by Fedsec forces and several notorious rebels were killed. These include the criminals Jenna Stannis, Dayna Melanby and Olag Gan. (camera cuts to the bodies of Jenna, Dayna and Gan) Their leader Blake, only just saved his miserable skin by teleporting back to his ship, abandoning his "comrades" to their fate. Rebel prisoners taken today have provided valuable information on Blake's plans and it can only be a matter of time until he is brought to justice.


Scene cuts to pictures of destroyed buildings, broken toys and the corpses of young children, whilst sombre background music plays. 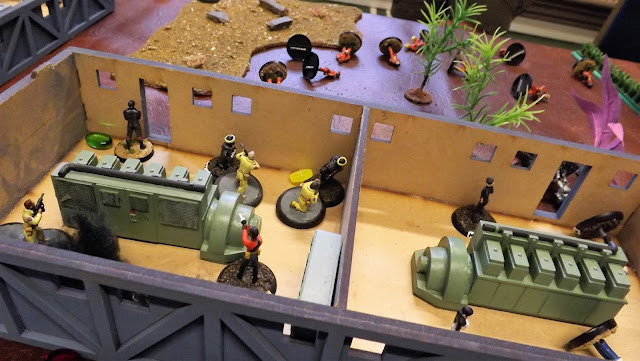 A fun game to 7TV rules. Apologies to Blake's 7 fans for messing with the series time-line and using characters from multiple episodes at once!
Vince
Posted by carojon at 08:22