Battle of Zorndorf 1758 - Honours of War


I have always liked the battles of the Seven Years War. I find the period gives a good balance between
infantry and cavalry, with artillery being less dominant than in later periods. Consequently I was
pleased when Chas and Andy suggested we play a Seven Years War game, not least as it would give us all a chance to see Andy's mythical Russian army; an army that he started painting last millennium. 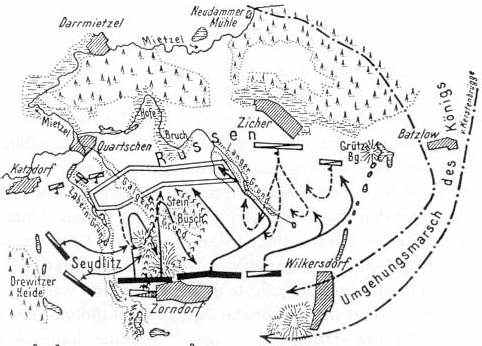 The battle to be fought was Zorndorf, with the man himself Frederick the Great in action.
Frederick was attempting to knock out a Russian army, before it had the chance to join up with Austrian and Swedish armies moving on Prussia and more specifically, Berlin. Worse still, the Russians knew he was coming and had taken up a strong defensive position near the village of Zorndorf. Their rear was backed by peat marsh and to their front was a wilderness of firs, heaths and
cultivated land. 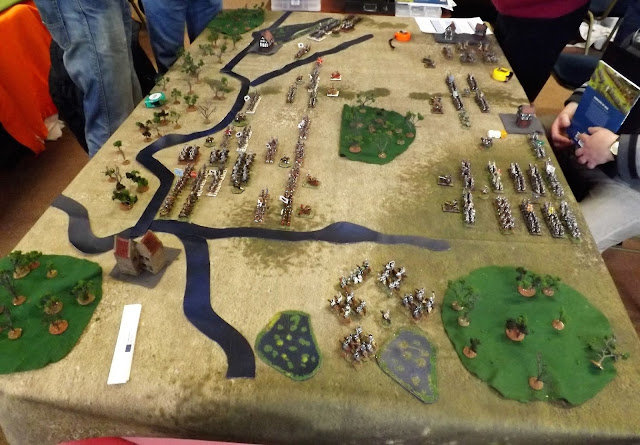 The Russians had 43,000 men and a strong artillery line, facing 35,000 veteran Prussians with equally
impressive artillery. On a battlefield that did not allow for flanking manoeuvres, the Prussians made
a frontal attack. The superb Prussian cavalry saw off their opposite numbers and fell on the Russians
infantry, but they had no where to go and died where they stood. With Prussian infantry now in hand to hand combat to their front, both sides ran out of ammunition and a vicious hand to hand struggle developed. By the time the battle ended and both sides withdrew, the Prussians counted 11,000 casualties to over 20,000 Russians, but the Russians did not break, they just died. Even Frederick was shaken at the result, although he had made the Russians withdraw and prevented them joining up with their allies. 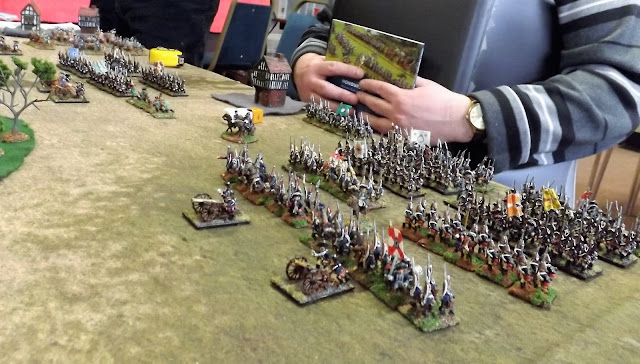 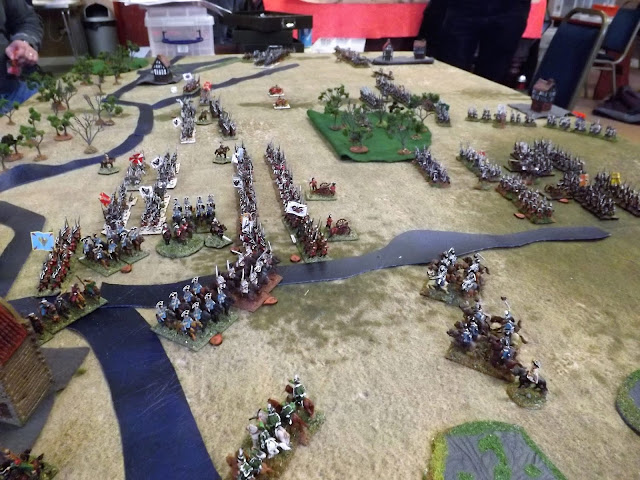 For the refight Andy and I played the Russians. Chas, "Mr Steve" and Mark the Prussians. The rules
used were "Honours of War".

Mr Steve brought his left flank cavalry forward to support the attack of his infantry (the terrain splitting his attack from that of Mark's infantry). Chas attacked with the cavalry on the Prussian right,
whilst I faced off Mark and Chas, Andy bore the brunt of the main attack with his infantry and cavalry on our right. 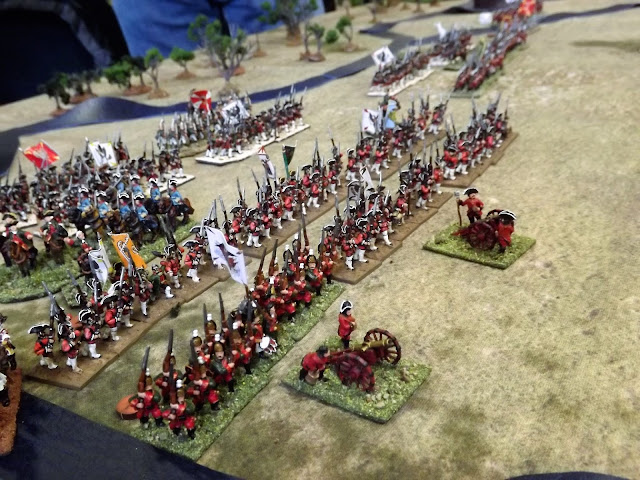 As in the historical battle, the terrain restricted both side's frontage and prevented sweeping flanking attacks. On both flanks Russian cavalry swept forward to face off their opposite numbers and protect the infantry from having to deal with a combined arms attack. 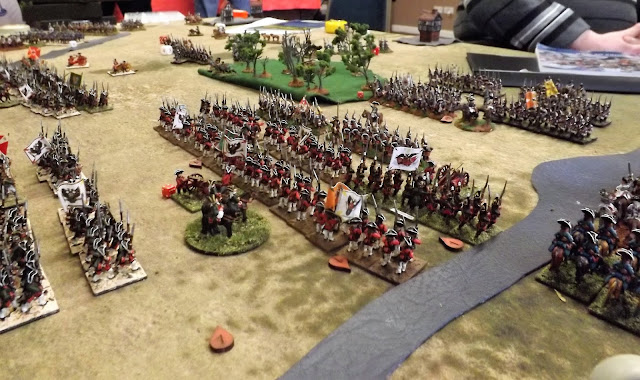 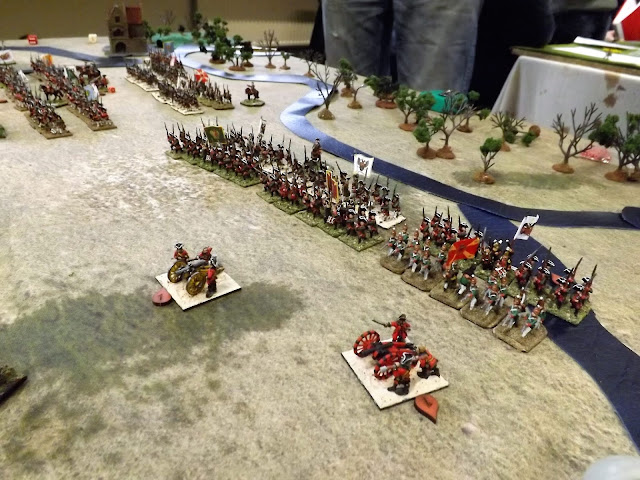 Pretty soon both side's cavalry wings were engaged and a vicious to and fro battle developed. Meanwhile, our artillery started to inflict casualties on the Prussian infantry across the line. The Prussian artillery initially caused us problems, but was soon largely masked by their advancing infantry.

Andy managed to push back the Prussian cavalry, but my cavalry got the worst of it on the other flank and I had to extend my infantry line to prevent a breakthrough. 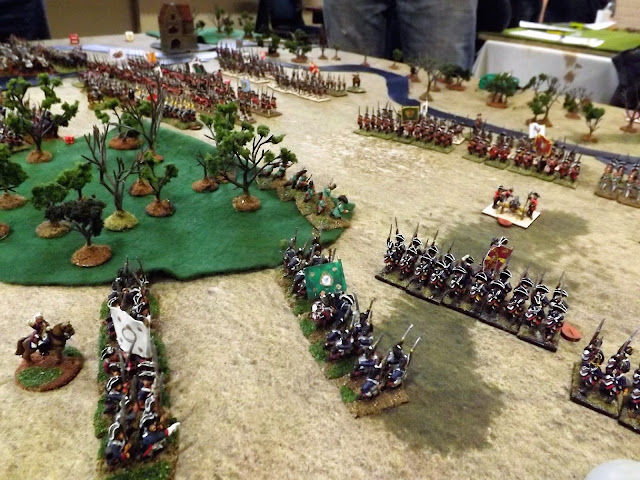 Contacting our gun line, "Mr Steve's" infantry took a face full of canister and the first line recoiled.
Mark's infantry suffered a similar fate against my guns and soon both players were bringing up their
second lines. Given the chance to rally, Andy's cavalry pressed on. Soon the infantry were also exchanging volleys along the line.

After more infantry casualties and with Andy's cavalry threatening "Mr Steve's" infantry, it became clear that the Prussians no longer had the strength to force both lines of Russian infantry and they withdrew in good order. 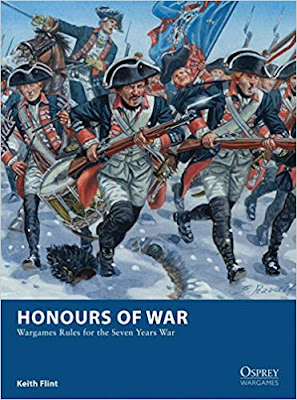 All in all a good game. "Honour's of War" rules seemed to play well and reflected the period nicely.
There was some debate about the effect of artillery and whilst the Russians had some very lucky dice,
we all felt that artillery did a little too well in melee. This can be easily solved by giving artillery a
minus one for "artillery in combat" AND a minus one for "small unit". To be fair this may be what was intended in the rules, but we failed to find it at the time.

Many thanks to all involved for playing like gentlemen and it was nice to see so many pretty 15mm
figures on the table.
Vince
Posted by carojon at 12:44