A number of small British supply dumps were set up on the southern shores of Lake Victoria, to support the latest British foray into German East Africa. The local German commander dispatched a company sized force to one of these dumps to relieve the British of the desperately needed supplies.


The supply dump was normally guarded by a platoon of Kings African Rifles, but there were also a number of additional small units awaiting the next boat. They had been forewarned of the German approach, and had time to construct makeshift defence works. The dump had the lake shore at its back, and was otherwise surrounded by bush, which reduced line of site, but had been cleared immediately adjacent to the buildings. 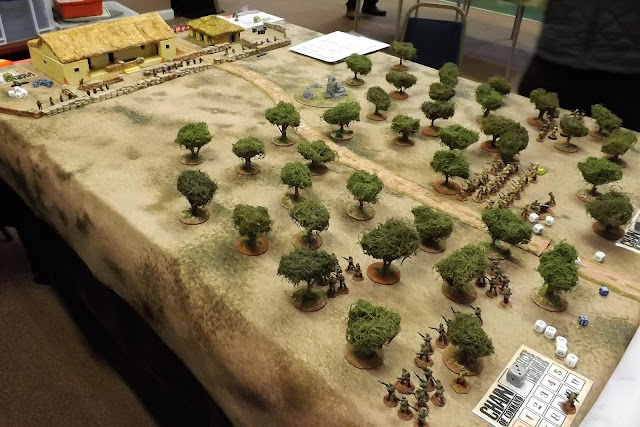 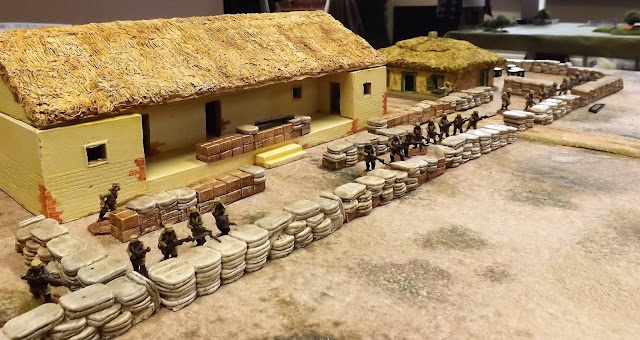 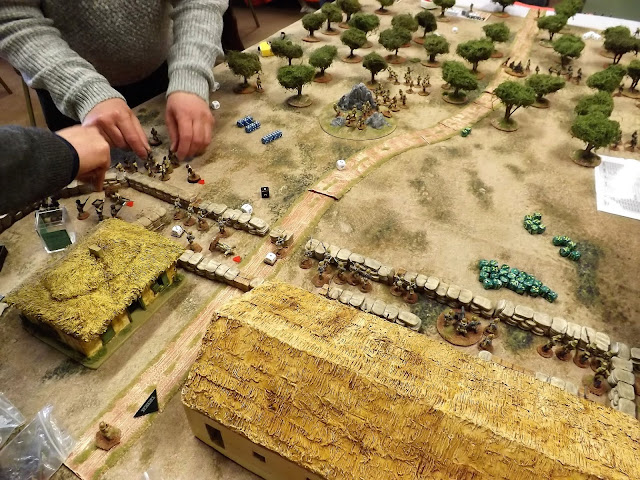 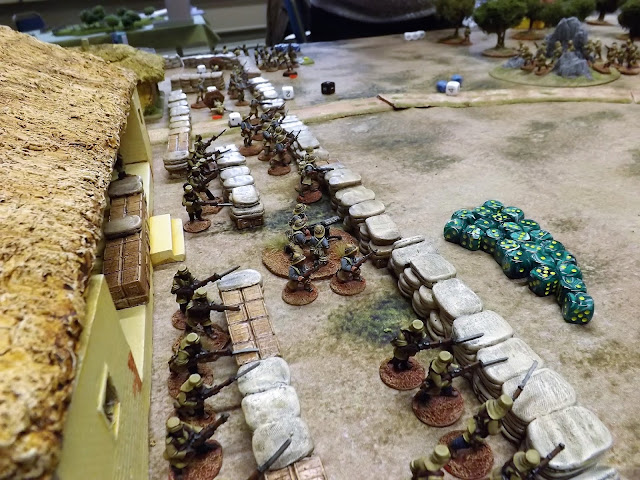 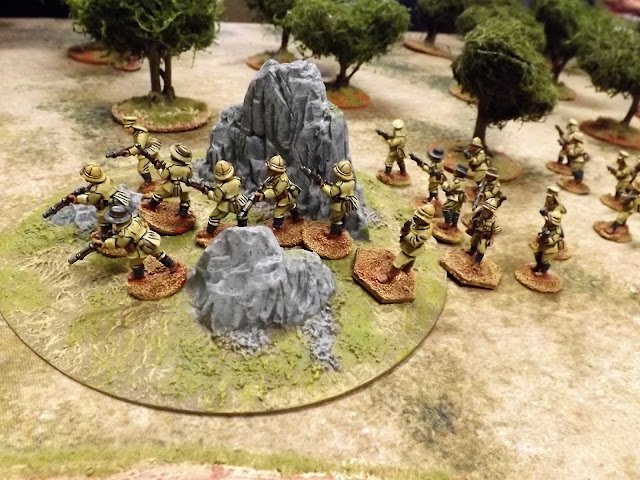 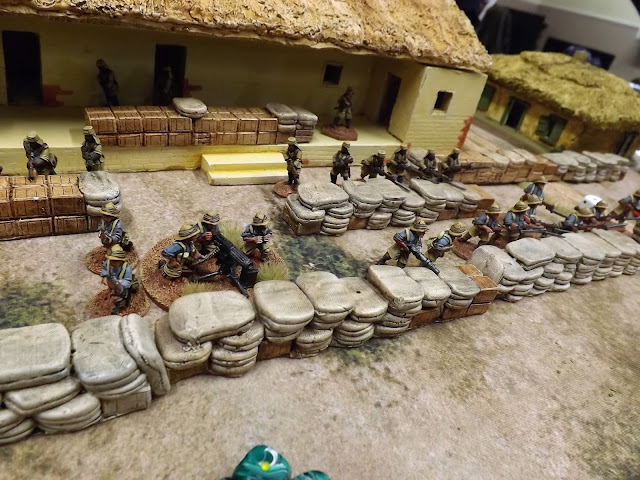 The initial German plan was for all three platoons to attack simultaneously across a broad front; however, this soon went the way of all plans on contact with the enemy. The Ruga-Ruga (on the right flank) quickly outstripped the other two platoons and found themselves isolated and under the concentrated fire of the defenders, at the same time, the Askaris (on the left flank) seemed to be rather reluctant, and were falling further behind, so that the three platoons were now in echelon. 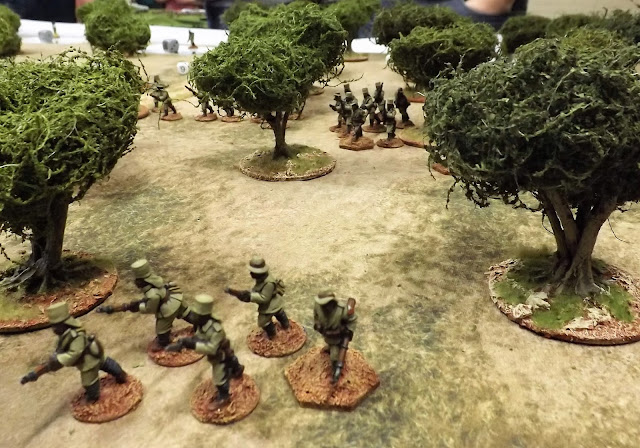 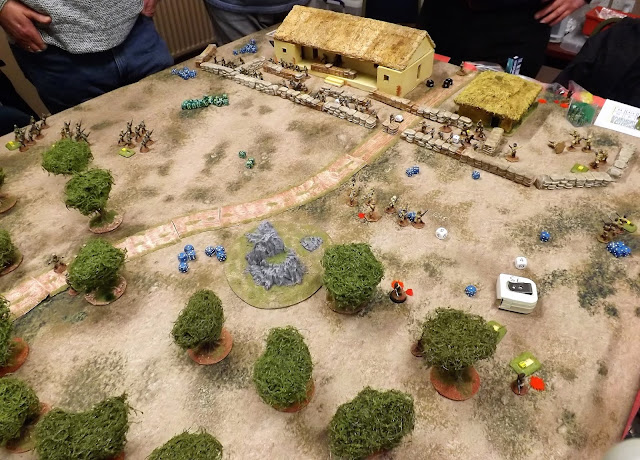 The Ruga-Ruga, being poorly armed but ferocious in hand to hand, rushed the almost undefended British left flank, only for the Sikhs and irregular Askari reserve to be deployed onto the table behind the very defences which moments before had appeared empty. After receiving withering fire, the Ruga-Ruga launched an attack on the newly arrived defenders, and wiped them out to a man; unfortunately in doing so they were left in tatters, and the few remaining survivors broke and fled. Unfortunately for the German commander, the next platoon was too far back to exploit the situation immediately, and the gallant defenders were able to redeploy a section of Askaris who had been held in reserve. Two sections of the European platoon did manage to get into the defences, but after some really vicious hand to hand fighting, they were so depleted that they too were forced to withdraw. 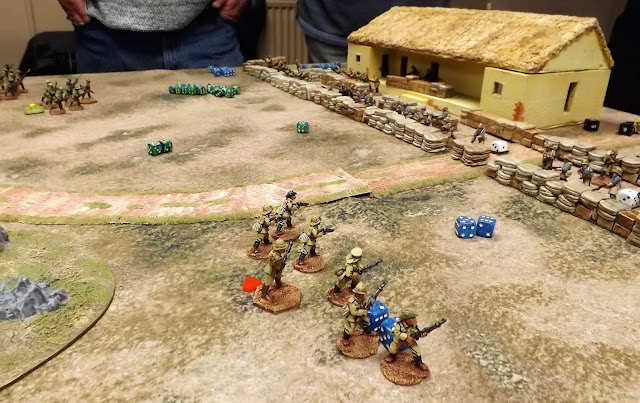 By this time the German Askaris had cleared the bush and were making their way across the open ground, but under the concentrated fire of the defenders, having lost a Junior Leader and having the Platoon Commander wounded, they too were forced to pull back, and the German attack was over.
Posted by carojon at 07:25