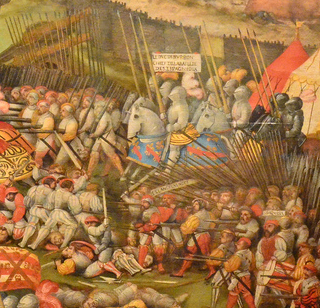 Our club has several collections of 28mm early renaissance miniatures, but has struggled to find a set of wargames rules that we feel give a good sense of the era, so these miniatures have languished “in the box”. With the publication of “Furioso – Renaissance Warfare rules for the sixteenth century” by Alternative Armies written by Steve Danes, we hope to have overcome this problem.

In addition to the rules, a supplement covering the “Italian Wars” has also been published. So after a few test games, to get a hang of the rules, and after consulting the supplement, which gave us the orders of battle, deployments maps, victory conditions etc. we decided to refight the battle of Fornovo. 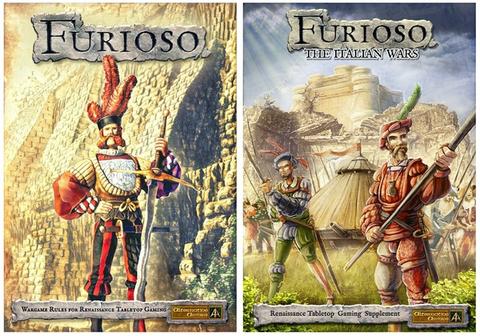 The Battle of Fornovo was fought on 6th July 1496 between the forces of King Charles VIII and a combined force of Italian City States. 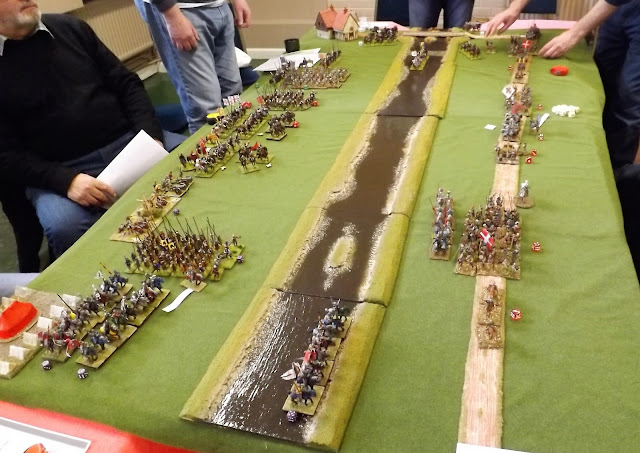 King Charles had invaded Italy earlier in the year and reached as far south as Naples. His progress was aided by the disunited response of the various Italian states and the superiority of the French army, who had brought a ruthlessness to warfare that the Italians were not accustomed too. 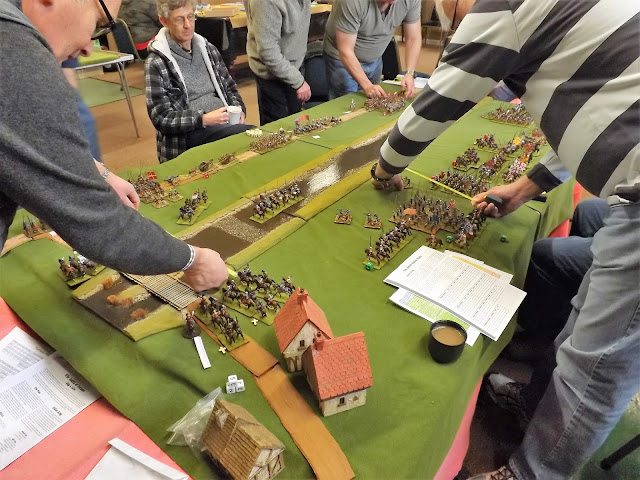 Now King Charles was marching north towards safety with a depleted army, due to the need to garrison important positions enroute and encumbered with a large amount of loot. At this stage the Italian states decided to try and intercept the French, with a much larger combined army, comprising troops from Milan, Venice and the Papal State, under the over-all command of the Marques of Mantua.

A classic quality against quality battle would take place. The Italian army deployed awaiting the arrival of the French army, along the route it would have take to get back to safety. The battlefield was divided and bisected by the River Taro, which was normally fordable, but recent heavy rain made this much more difficult – the French were counting on the flooded river to obstruct the Italians. 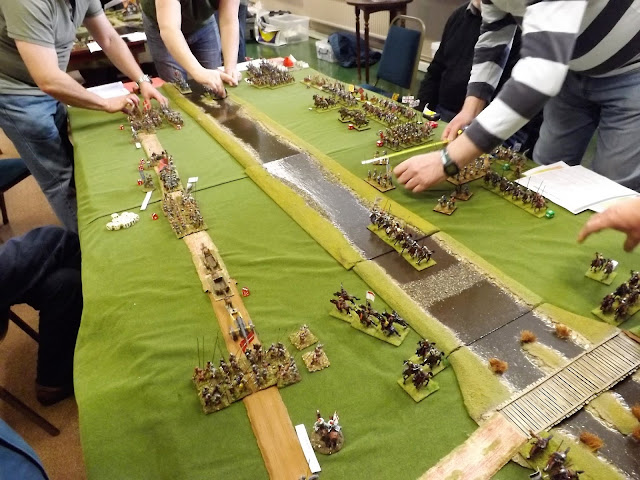 Can the Italians stop the French getting away, or at least give them such a bloody nose, that they won’t come back and what about the baggage train piled high with loot? 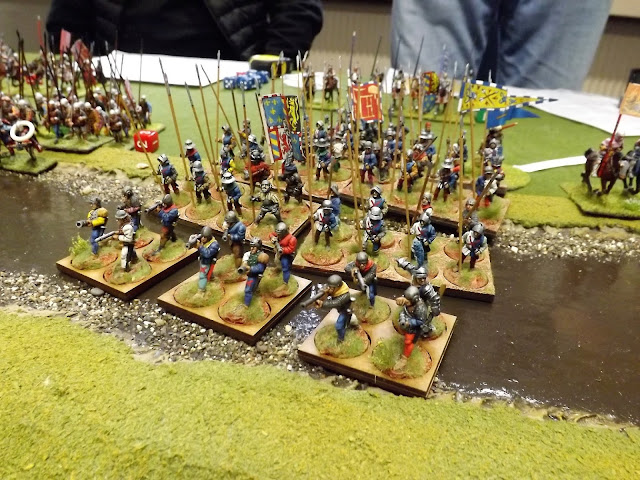 An important part of the Furioso rules is the command and control system, that determine what the
various units will (or will not) do each turn. At the start of the turn a D6 is rolled for every unit, which is then added too or subtracted from, depending on the unit’s quality and this determines the sequence in which units move/fire/melee i.e. high numbered units go before low numbered units. 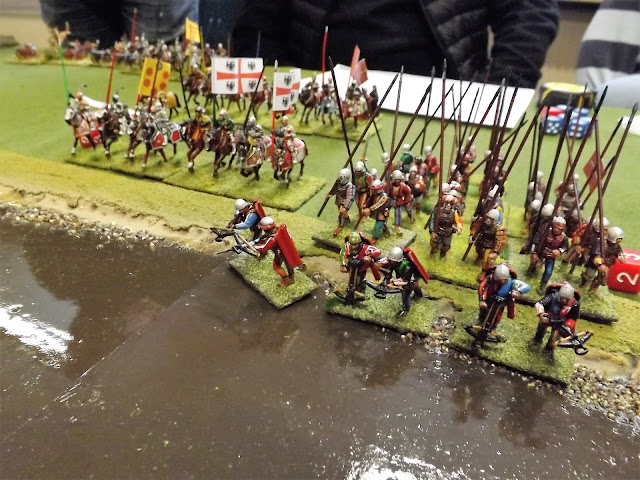 Unsparingly highly motivated troops like the Swiss mercenaries and the elite French Gendarmes add to their dice role and less enthusiastic Italian mercenary cavalry and skirmishers subtract. The dice role is further increased by another pip, if troops are within range of traditional enemies, in this case French employed Swiss and Italian employed Landsknechts. 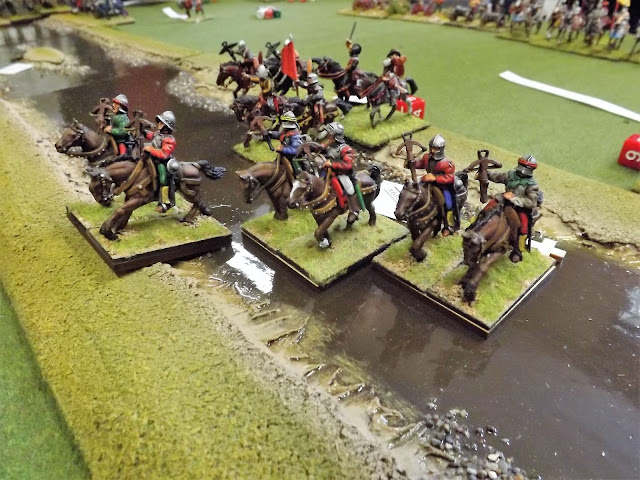 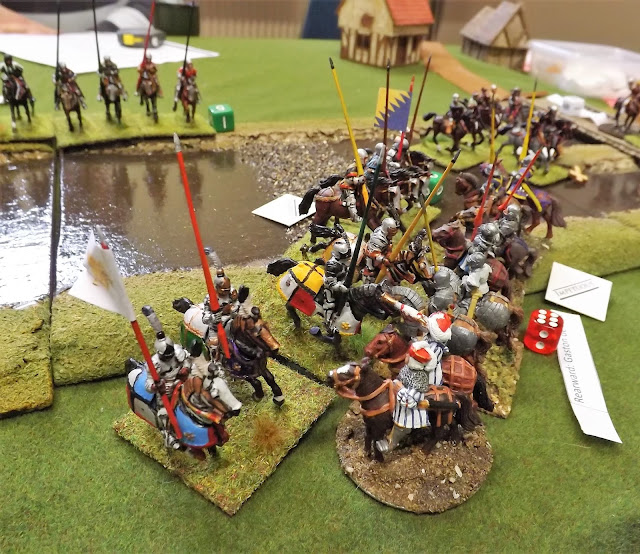 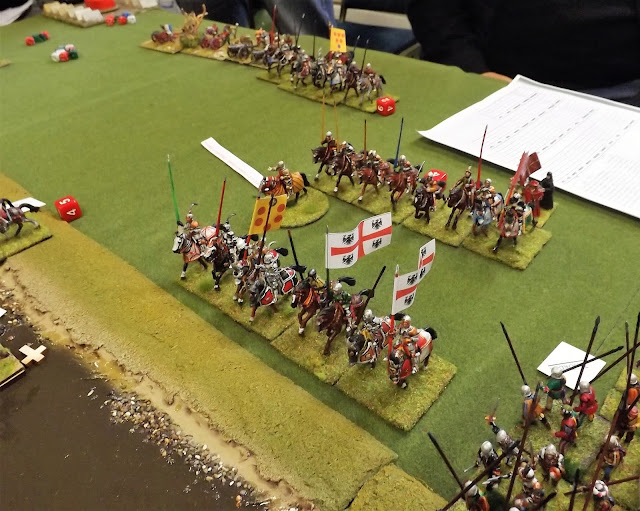 As the Italian army started to cross the river, often disordered by the higher than expected water level,
the French gendarmes contacted them and scattered the lead units. But the French successes was not
without casualties, either from the melees or from the mounted Italian crossbowmen. 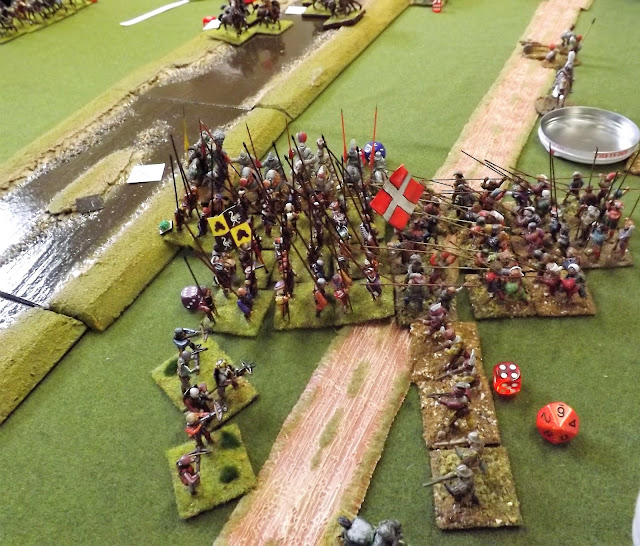 The French army, lacking any light troops had no answer to the mounted crossbowmen, who now pressed forward towards the baggage train, shooting at any French units in the way. 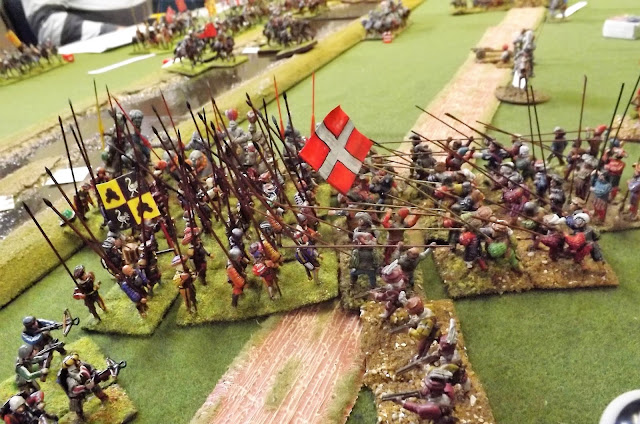 The French gendarmes having fought off further Italian armoured cavalry charges and stung by the crossbow bolts, were gradually destroyed. The Italian pikemen now started to cross the river and engage with the French pike units who fought valiantly too, one unit under the command of the King himself. 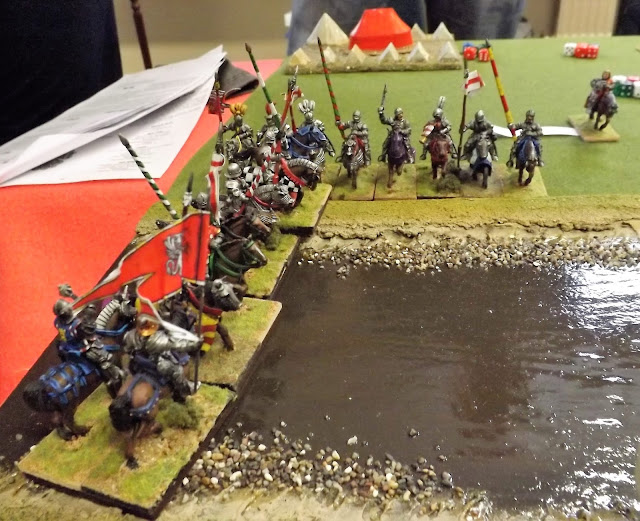 But what of the Swiss and the Landsknechts who were fighting their own private battle, with little regard for what was going on around them… a clear case of business matters overriding the personal
considerations.

Both units were advancing towards each other impetuously and in a furious state of mind (thus the name of the rules - Furioso) The Landsknechts made a good crossing of the river and clashed with the Swiss face-to-face. The Landsknecht’s Double-soldiers got the better of the Swiss halberdiers to start with and with both sides being “Furioso” the rules allowed for repeated bouts of melee between the protagonists, rather than the single bout per turn, for other troops.

However, the Swiss were not so easily disposed of and in the following turn scattered the Landsknechts and then held their position, despite a charge in the flank by heavily armoured Milanese’s cavalry. Even with heavy casualties the Swiss continued to participate in the battle, assisting a Gendarme unit to rout a unit of Italian armoured cavalry trying to cross the river. 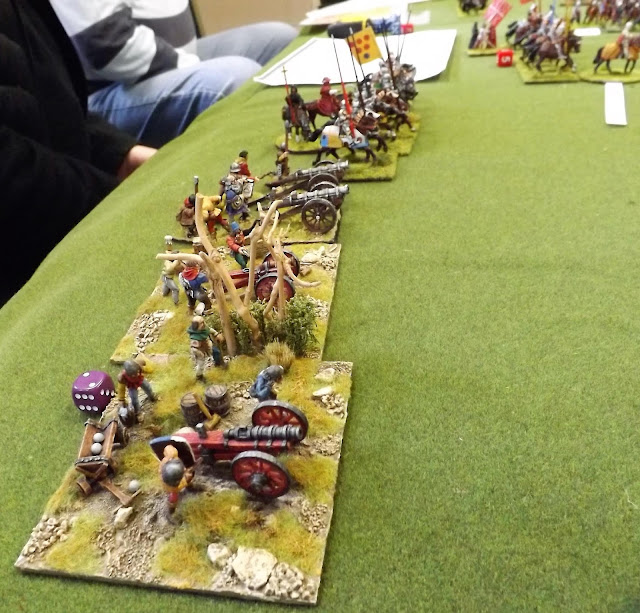 By now it was clear that things were drawing to a conclusion. The King of France was in imminent
danger of capture, the elite Gendarmes were no more, the French pike blocks were surrounded by
Italian light cavalry and the French baggage was pillaged; only the Swiss were in a good way, despite
their casualties.

Meantime the Italian army had suffered many losses too, but the tactical situation was sufficient to declare the battle a victory for the Marquise of Mantua.

We can only conjecture the end result on European history. The King of France in a hair-shirt doing penance in Rome and emboldened Venice holds off the Ottoman empire, Milan intervenes in the Wars of the Roses, the road southwards is now safe for St Peter’s pence to flow towards Rome, Martin Luther - whose he?. If you are a doctor, you will know of other benefits from this outcome too. 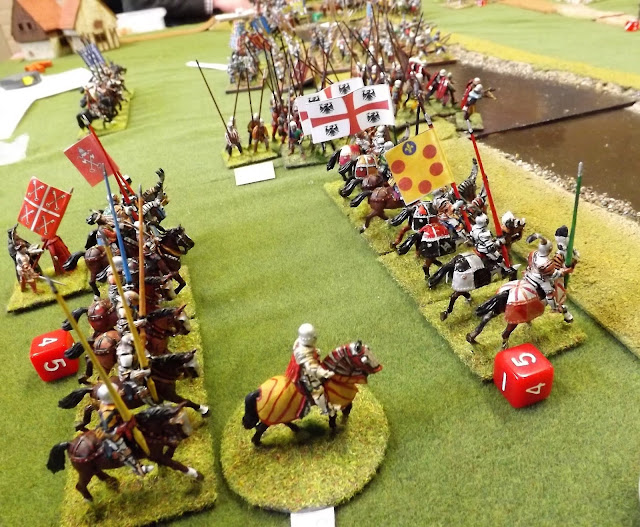 Thanks to Dave for his role as King Charles, ably assisted by Vince and Mr. Steve and to Bob C as the marquis of Mantua and his allies Colin M tabling his force of Milanese and Steve M for the Venetians.

Your correspondent was in command of the Albanian mercenaries, and has now returned to Durazzo
with more than his fair share of the looted French baggage train
Posted by carojon at 17:24