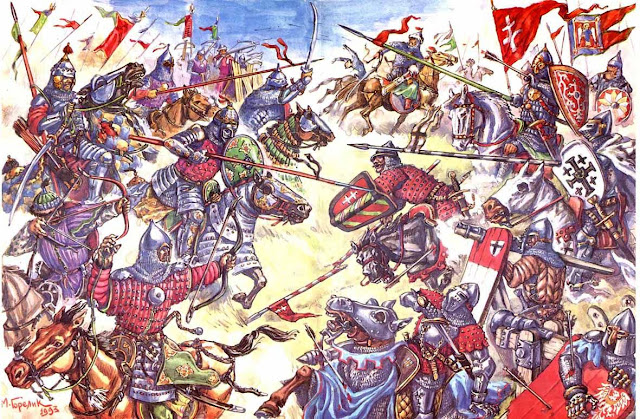 With the overthrow of the "Golden Horde's" Khan, Tokhtamysh, by local rivals supported by Timur, there was an opportunity for the Grand Duchy of Lithuania to gain territory in Tatar territory. Tokhtamysh was more than happy to sign a treaty transferring Ruthenian lands to Lithuania, in exchange for military support to regain his serenity over the Horde. 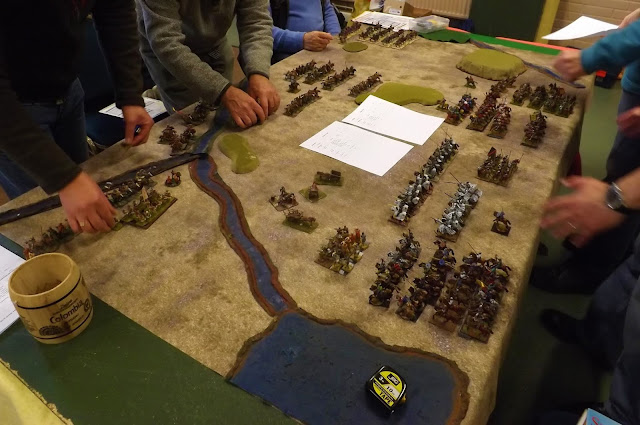 Grand Duke Vytautas of Lithuania signed treaties with the Teutonic Order, Poles, Moldavians and others, which were sufficiently lucrative to attract those nations to join his expedition.

Following two successful campaigns reaching the Crimea, Vytautus obtained approval from the Pope for a "Crusade Against the Tatars". In 1399 the crusade encountered the Golden Horde's army near Poltava in present day Ukraine. 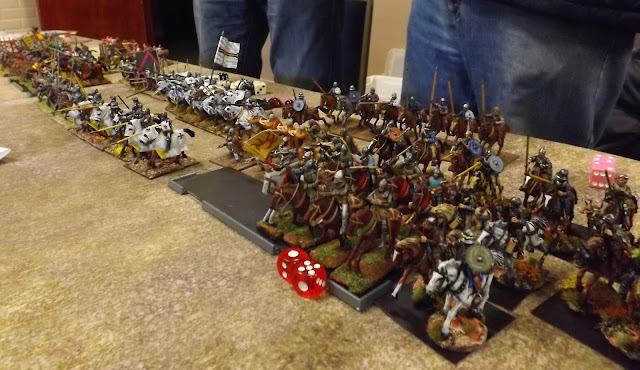 The stage was set for the Battle of Poltava. A truce was agreed with Khan Temur Qutlugh, to allow both sides to prepare for battle. The Horde were secretly waiting for reinforcements and Vytautas wanted to prepare a wagon fort to break up charging horsemen and drive them onto his guns. Consequently neither side sought to break the truce. 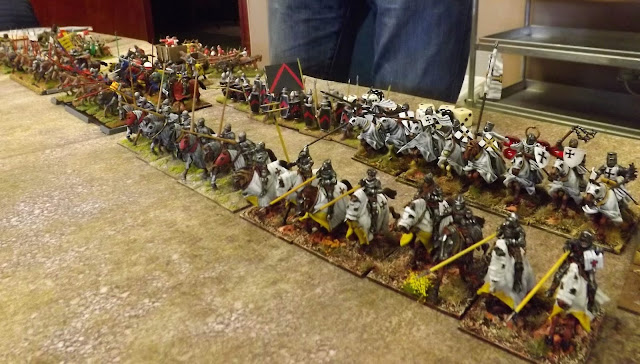 Not liking what he saw, Temur feigned a retreat by his army. Seeing this Vytautas ordered most of his troops out of the fort in pursuit. When the Lithuanians were sufficiently far from the fort, Temur's army turned to face them and a flanking force appeared behind them. Caught in the open, allied casualties were heavy and Vytautas only just escaped with his life.

We started our game at the point where the Horde had turned to face the Allied army. The game was played in 28mm to Swordpoint rules. Myself and Andy C took the Allied army, whilst Chas, John & Steve M played the Golden Horde. 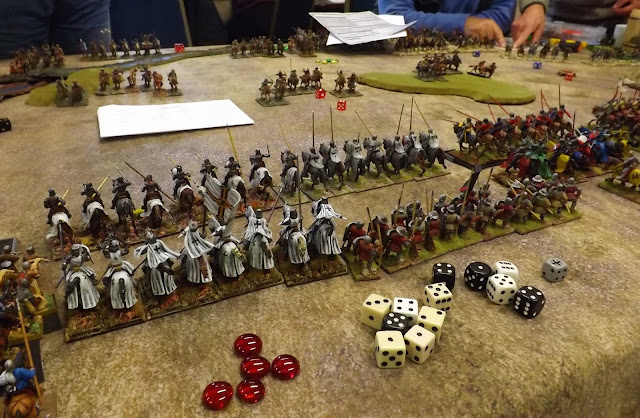 The Horde army consisted of a large number of steppe horse archers, supported by three units of noble cavalry. Deployed as both light and skirmish cavalry, the horse archers benefited from many units with Superior Shots, Parthian Shots and Nomad Horse special rules. The Nobles were heavily armoured veterans, who were also Superior Shots. 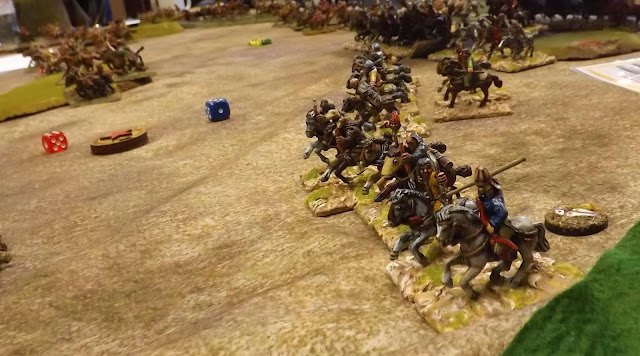 The Allied army employed Teutonic and Polish knights, as well as Lithuanian Boyars, supported by turcopoles, mounted and dismounted crossbows and spear armed foot, and a light bombard. Needless to say the knights were a force to be reckoned with.

Before the game start, the Horde used their special ability to advance their skirmish horse on our flank and in front of our main line. 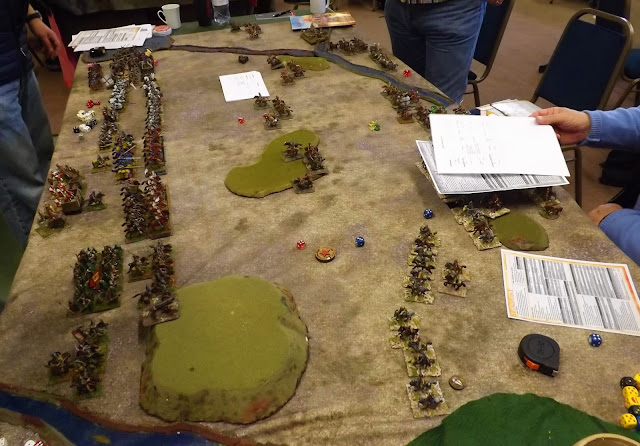 Thanks to Andy's die rolling we won the initiative and sought to prevent our flank being turned, by deploying our own Tatars and Lithuanian horse to the flank. 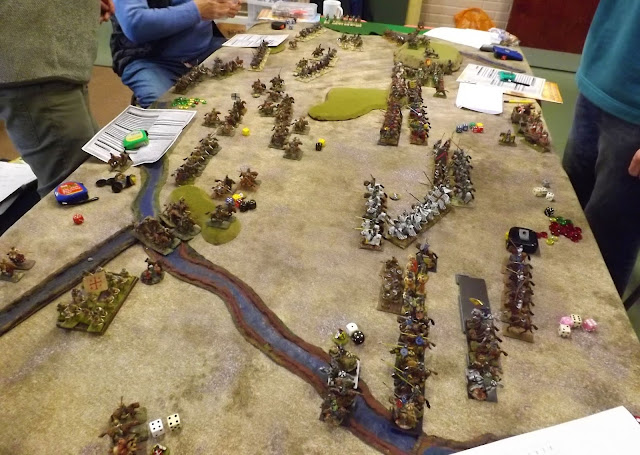 Firing broke out along both lines and soon saddles on both sides were being emptied. On our right we had the better of the contest, with Andy consistently winning the initiative and driving the Tatars back. On my flank things did not look so rosy, as Steve advanced and I was soon waving goodbye to some of my mounted crossbows. 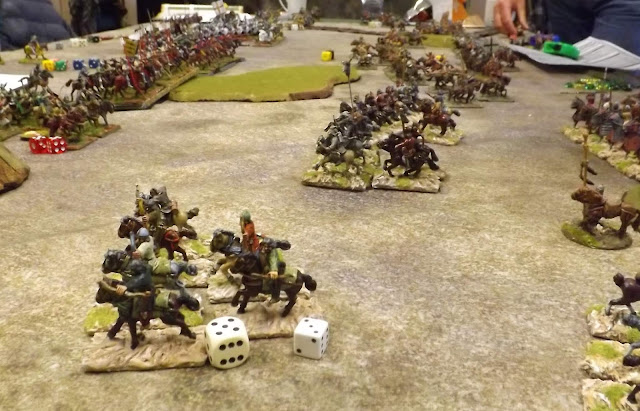 Seeking to bring the enemy to battle we advanced across our line, rotating out any units discouraged by enemy shooting and trying to stop the horse archers concentrating fire on isolated units, by forming line of battle.

In the centre, our knights kept charging and forcing the horde to evade, relying on their armour to save them from the worst of Parthian shots coming their way. 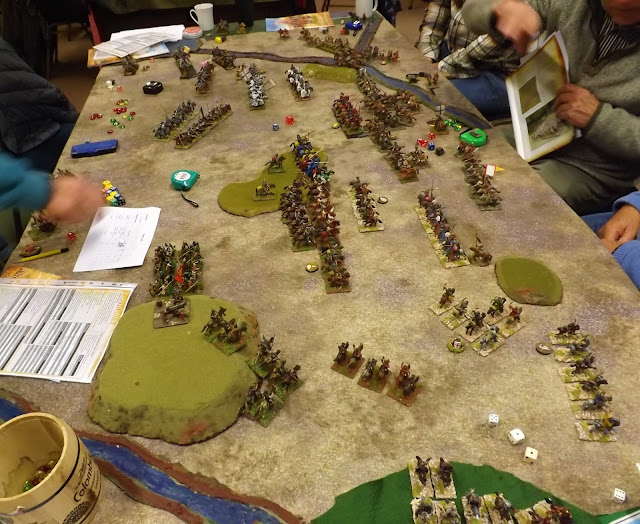 Eventually our centre drew the Horde's noble horse to battle and the true struggle started. Getting the better of the situation, we forced them back, but my flank was suffering from skirmish fire and I had to bring up my crossbow armed infantry to take the strain. 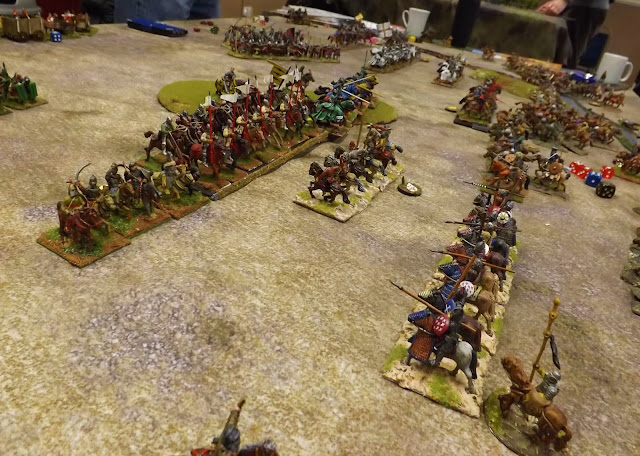 With knights rampaging forward in our centre and Andy sweeping up his flank, the pressure was off my flank and the Horde headed for the hills. 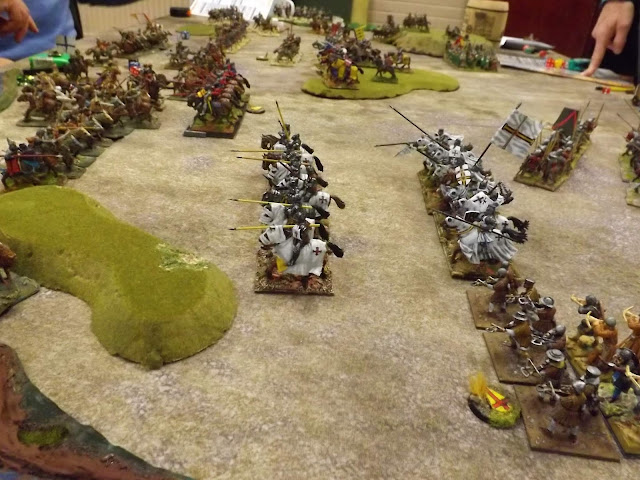 A good game, played in good spirit by both sides. The excellent Swordpoint rules handled things smoothly, once our aged brains had come to terms with their intricacies again.

The Horde suffered, but would have done better had Andy not won every single initiative roll. I can see why he was put in charge.