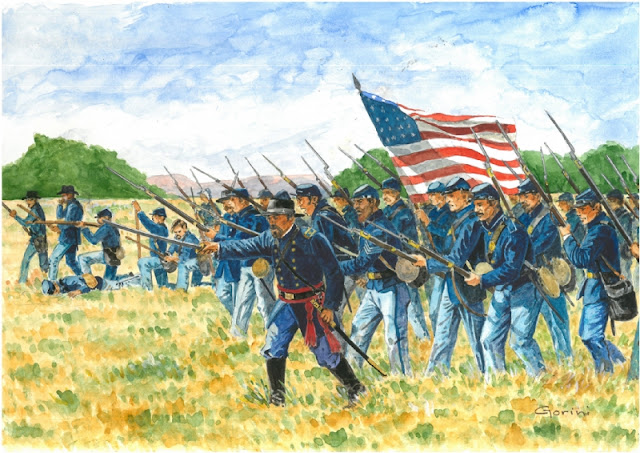 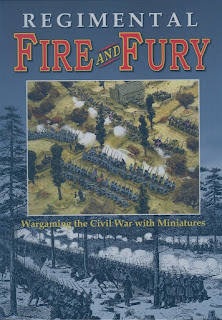 The Confederate army is in full retreat southwards. They have identified a position where they would prefer to meet the Union forces in battle. 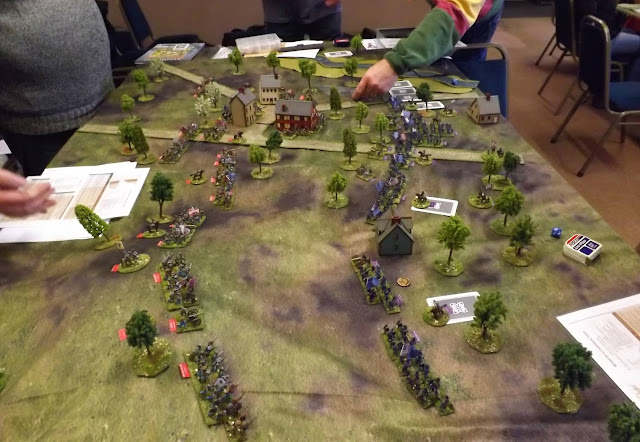 To enable that to happen they must hold an area which includes a village on a crossroads and a dominating hill, for as long as possible. To this end there were two short divisions sent as a delaying force and they deployed their lead regiments in the village and on the hill. 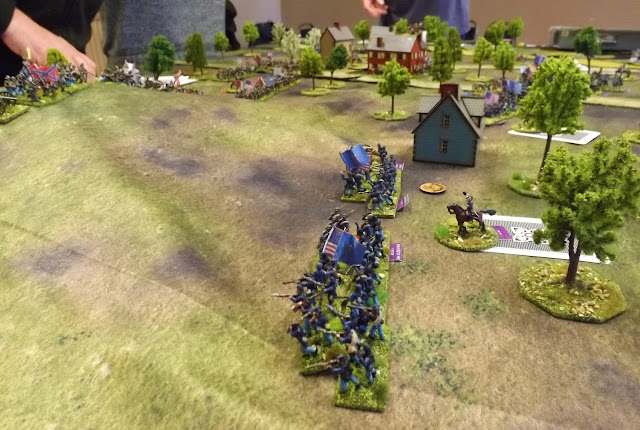 The area was lightly wooded and the ground broken. Visibility was restricted by these woods, and because it was early morning, there was also still mist about. 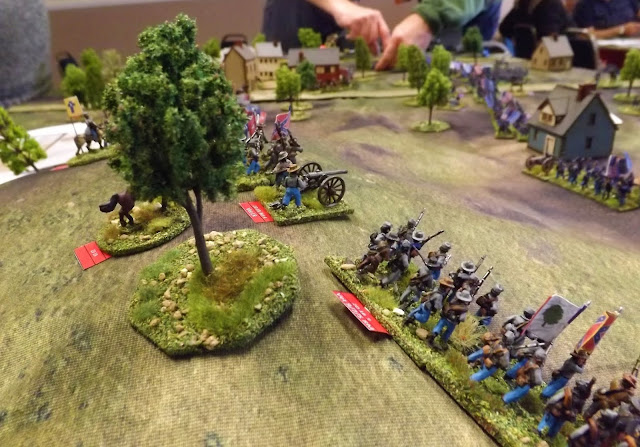 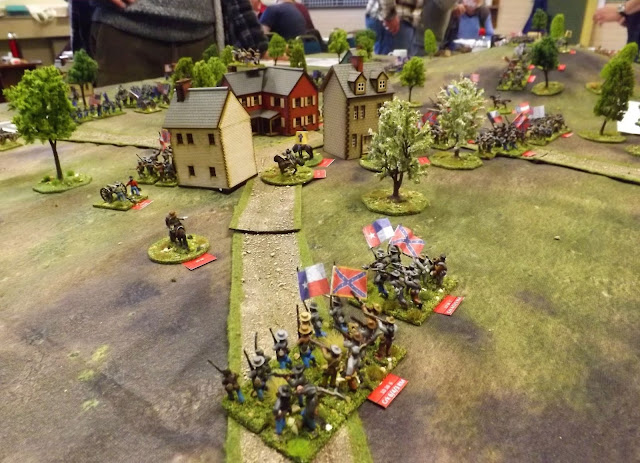 The Union advance guard, with some of their best units were advancing to take the strategically important cross roads and dominating hill. They must achieve this as quickly as possible so as not to delay the advance of the main force only a few hours behind. 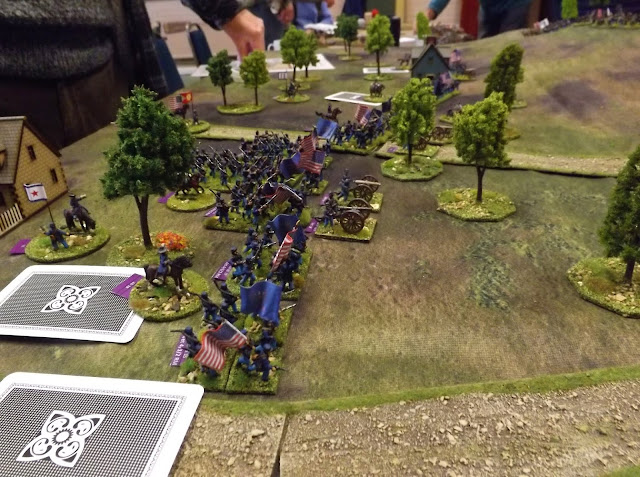 This was a twelve move game or 30% loss on either side. The Unions had 112 stands against the Rebels 90. The Union had eight guns against six.

Due to a lack of visibility, 8” for the first two moves then 12”, cards were laid face down for each of the units. These cards showed the unit and in what formation it was moving. Fire and Fury (F&F) do not have a mechanism for this but it all seemed to work. 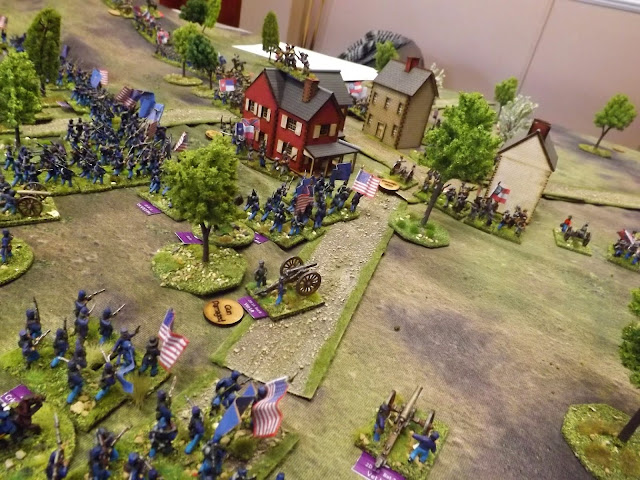 Union troops advanced through the woods towards the hill and up the road towards the village. Meanwhile the rebels were trying to get their reinforcements into position. 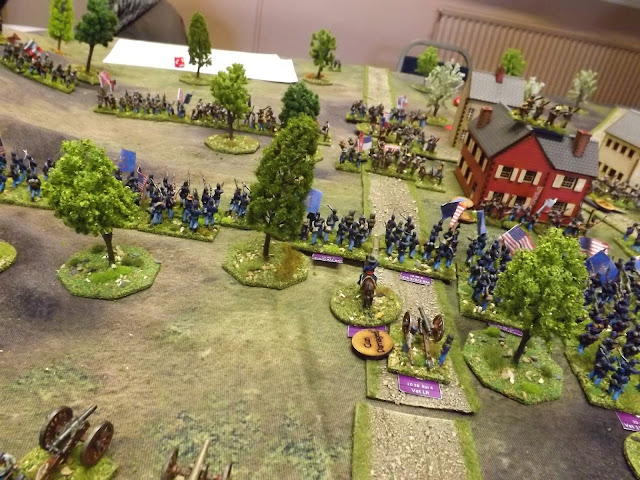 First fire was to the Rebels as a Union gun deployed a little too close to the village and the Rebel infantry gave them a blast. The laser range finder was obviously not calibrated correctly. The mist now lifted and the mayhem started. 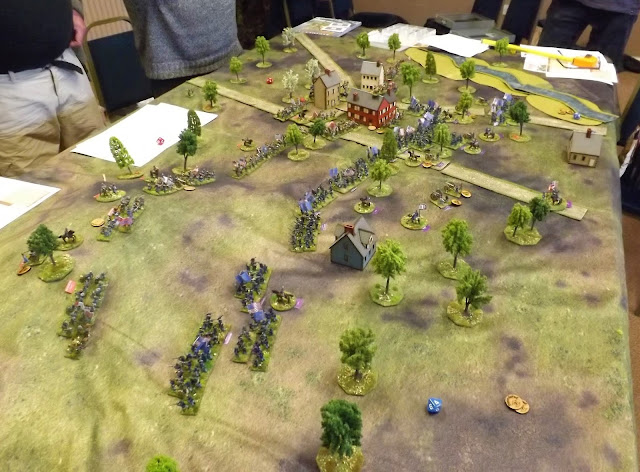 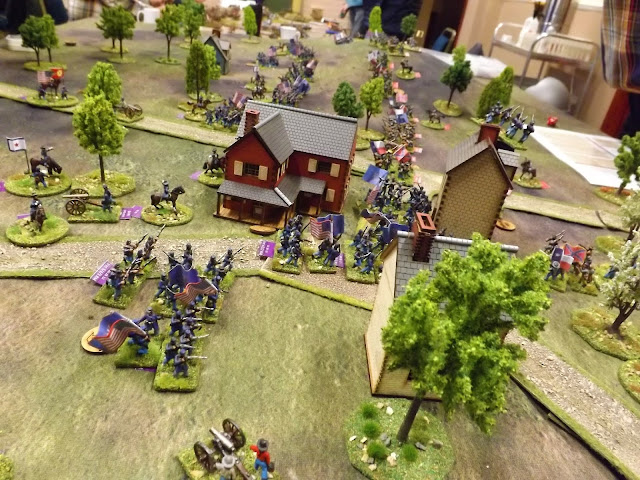 The Rebel right flank on the hill opened fire as the Union troops advanced and there was a more or less equal exchange of casualties. Meanwhile in the village the Rebels waited for the Union columns. 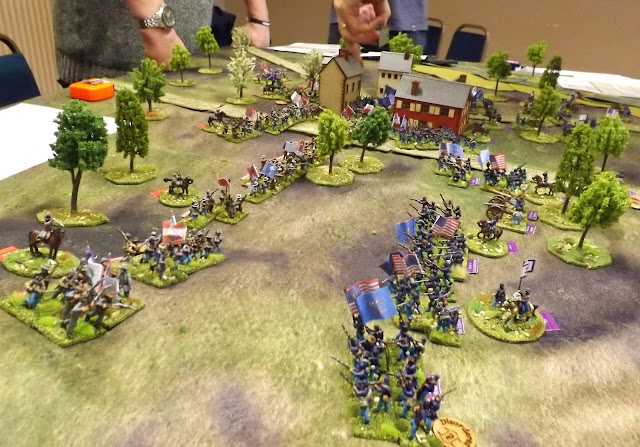 Three columns pushed forward towards the village then from close range the rebels opened fire. The centre column was checked but the two flank columns hit and after some good dice throwing managed to push the Rebels from the first part of the village.

The Rebels then managed to put a couple of regiments on the flank and gave them a blast. Casualties ramped up on both sides. The rebel right turned into an attritional exchange of fire as the Union troops advanced their way up the hill. 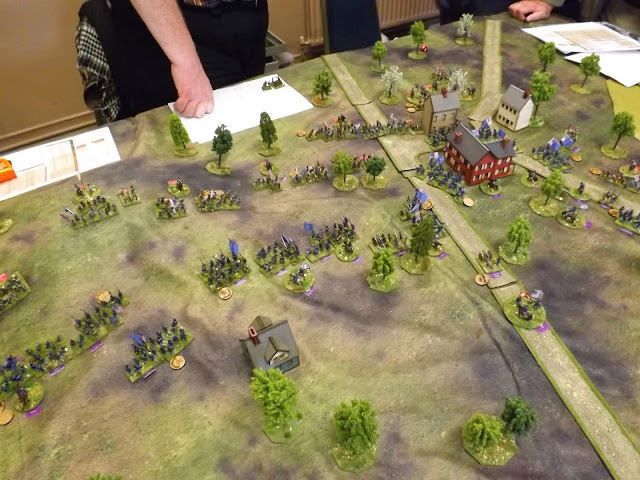 In the village the Union troops were reinforced and proceeded to move through. There was hellish fighting with each side losing stands at a prodigious rate. Both sides were moving very close to the 30% casualty rate. On the hill the Union troops pushed forward. The exchange of stands continued each move.

Eventually the Rebels were pushed out of the village.

Unfortunately for the Rebels it was all a bit too much and they reached the 30% mark slightly ahead of the Union and so were forced from the field.

The game was designed as a Union victory but I tried to make it as even as possible. The Union had more and better troops but the Confederates and the advantage of ground. As it worked out I didn’t do too badly. Although the Confederates lost, the Unions were only six stands away from loss themselves. 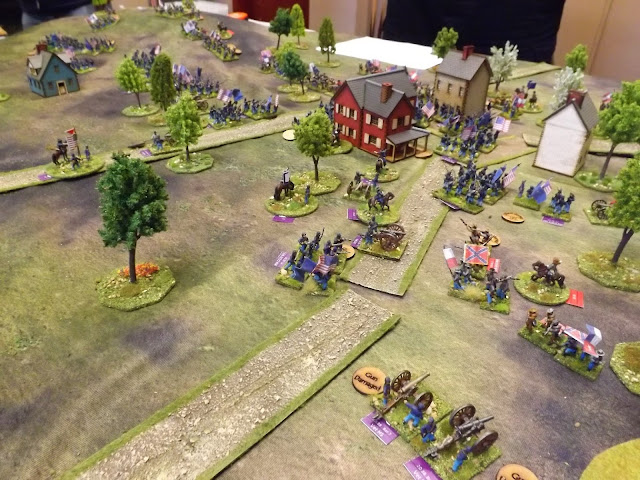 Thanks to Ken and Steve, our bearded Confederates and Simon and David our clean shaven Unions.

Figures by AB and Blue Moon. My thanks to Nick and Mr Steve for their efforts in painting them for me.

Battle Mat by Tiny Wargames. Buildings by Empires at war. The trees are a mix of Ebay buys and from Buffers Model Railways. The hill was formed by my coat, I had left the real ones at home. Roads and rivers from Fat Frank.
Posted by carojon at 10:03