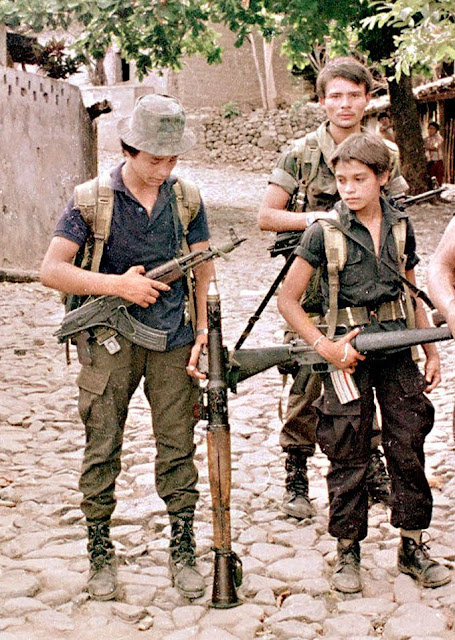 Following on from our Christmas game, Chas thought a re-run at the club was in order.

He wanted revenge for the dreadful beating he took last time and so had made some adjustments. It turned out that his "tweeks" included 2 scary APCs on his side this time and a load of less scary Technicals on our side (something made me think I should have skipped the sequel).

This time my kill team of Tier 1 Operators (retired and for hire) were assisting a bunch of raggedy militia in attacking the presidential palace (well Chas had paid £50 odd quid for it, so it got another outing). The militia could call on a range of cobbled together vehicles mounting unfeasibly large weapons. 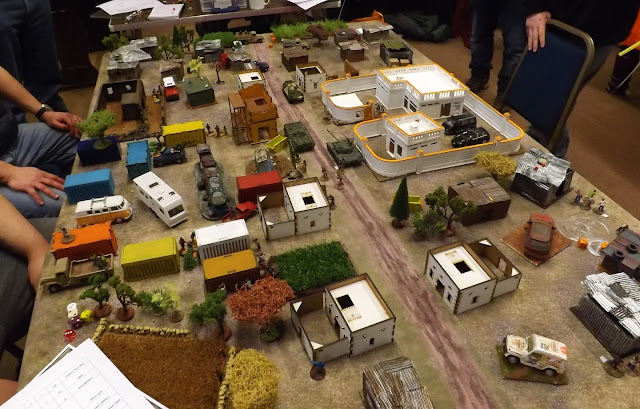 El Presidente was hanging out with his cartel boys in the Palace, whilst various cartel members loafed around town. Should there be the need, elements of the army were on call just off table, in the aforementioned APCs. 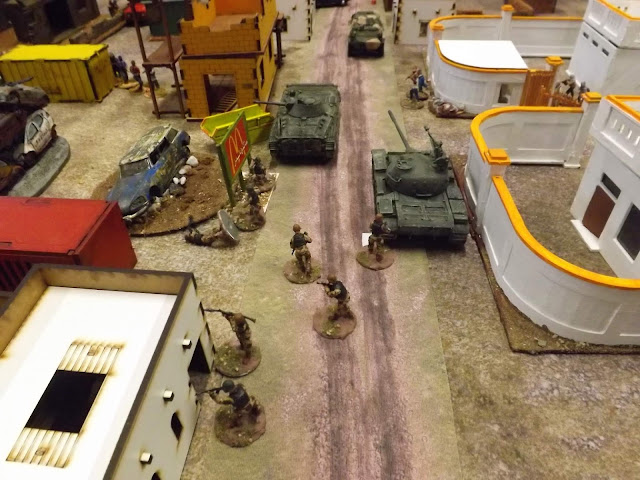 Like ghosts my operators swung into action, avoiding the mobile phone armed narks on every street corner and darting from cover to cover. Through the magic of random movement, it soon became clear that most of said narks, were disappearing into the woods for unknown purposes, leaving the field clear for a stealthy approach. 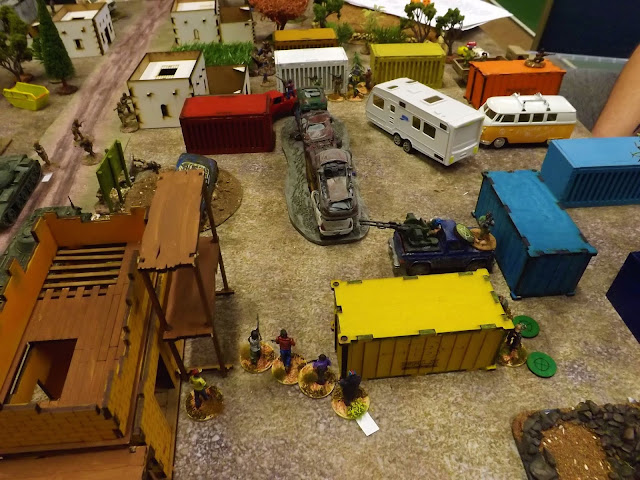 Christopher arrived on my flank with the militia. My sergeant made the universal "shhhh !" signal to the militia leader, only to see him gun down the first cartel boy he saw. OK, so scratch the stealth element of the game. 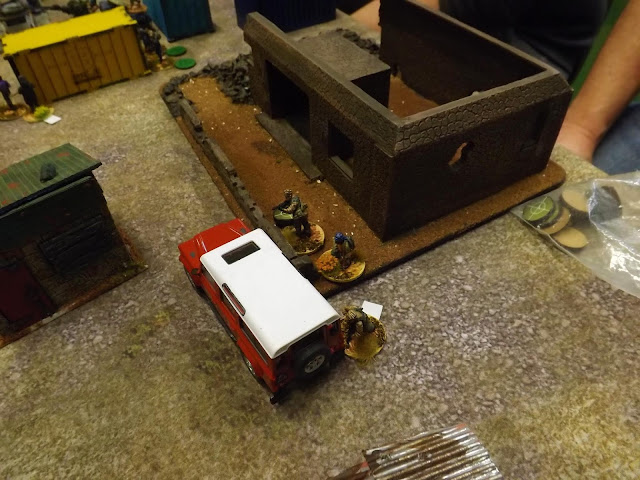 With the locals interest raised, it was not long before a fire fight developed. Cartel members ran out onto the street and were met with controlled bursts of fire from my men and everything but the kitchen sink from the militia. Militia and cartel died in droves. 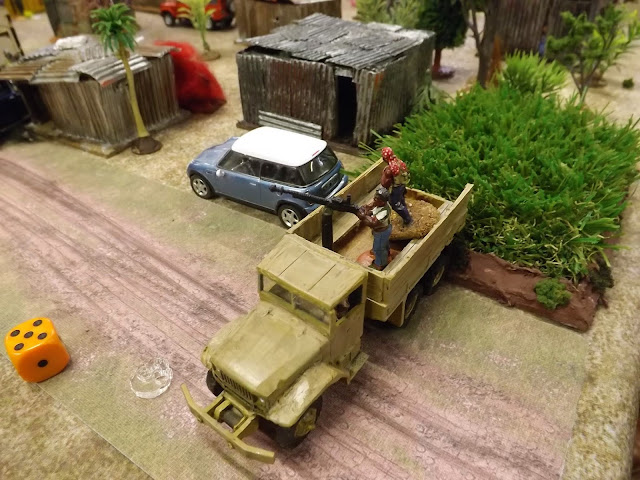 At this point an APC appeared at either end of the main street and both disgorged infantry. We felt help was needed, so brought on our collection of back street mechanic technicals.

With the army moving up, a few well placed bursts from the Tier 1 guys wiped out one squad. 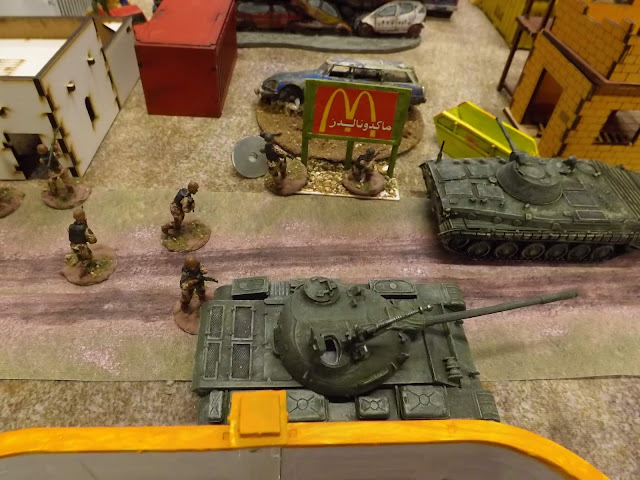 The militia were not so well off, as cannon shells ripped through the houses they were firing from and ruined the day of many a part time soldier.

With RPG rounds hitting the palace, the President decided to make for the safety of one of the APCs. Three technicals raced onto the street and let fly a hail of recoilless rifle and HMG fire at the APCs. Christopher rolled the dice. Net result, one flat tyre on the BTR and nothing else. 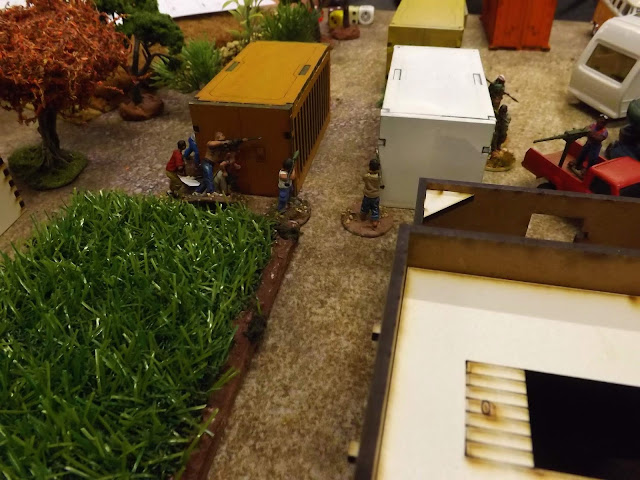 The APCs opened up and made quite a mess of the technicals. That was definitely not going to polish out.

We decided to call it a day and, like shadows, my tier 1 operators slipped away. As you would expect, no operators were hurt during the making of this insurrection. 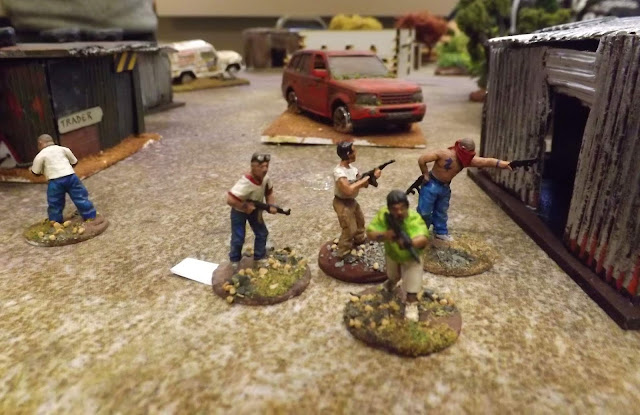 What about your militia allies, I hear you say. They didn't even make half a column in paper I was reading, in first class section of the plane flying us home. Brutal what they do to failed revolutionaries in these banana republics. All in all a fun game, played to a nice new set of rules in the form of Spectre Operations. If you want to try ultra modern skirmish combat (not this 80s or 90s "modern"), then these are worth a look. You get all the drones, red dot and laser sights, IEDs, covert body armour, advanced comms and tandem charge devices you could want. The rules cover the range from "Tier 1 Operators" (you can join an elite unit, you have to be invited to join Tier 1) to "No Clue" militia and every weapon under the sun. Very much based on suppressing targets and intelligent use of "Overwatch", walking about in the open does not usually end well. Not a competition set of rules certainly, but played with some give and take they give a good feel to a modern skirmish simulation.

For those interested the centre piece Presidential Palace is MDF (curved MDF in wargames terrain is new to me) and can be found at:
Sarissa Precision