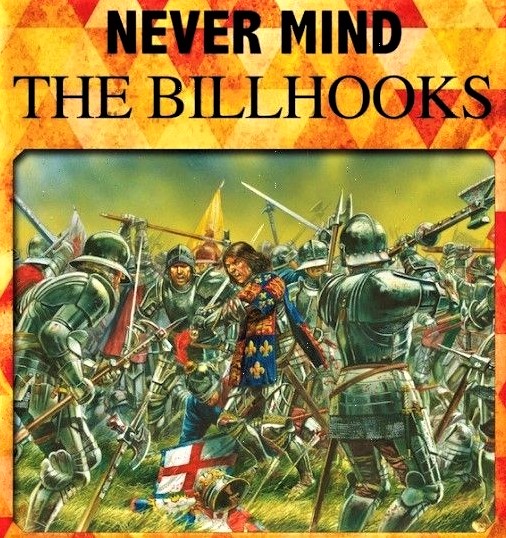 Following the disastrous defeat at the battle of Castillon, Henry VI of England suffered a mental breakdown. The Dukes of York & Somerset vied to rule "on behalf of" the king and York got the support he needed to take power. Quick sticks he imprisoned Somerset.
Unfortunately for York, Henry VI recovered his wits enough to continue his reign and he released Somerset and convened a Great Council to meet at Leicester. York was no fool and could see the writing on the wall (charges and a quick trip to the headsman) and so he raised a force to block the King & Somerset, on the road from London to Leicester.
The King beat York to St Albans and occupied the town with about 2000 men. The Yorkist army of over 4000 arrived outside St Albans and demanded Somerset be handed over. The King refused and the stage was set for the first battle of the Wars of the Roses.
Our refight was played in 28mm, to "Never Mind the Billhooks", using a variety of figures ranging from Perry's to Foundry and plenty in between.
For the Lancastrians, there was Chris as king, Jason as Clifford and Steve M as Buckingham.
The Yorkists were led by Chas as Richard Duke of York, Andy as the Earl of Salisbury and myself as Warwick the kingmaker. The OBs and set up were borrowed from the excellent work done at:
Shed Wars - The First Battle of St Albans,, 28mm Wargame Part One
The battle started with the Lancastrians surprised, as the Yorkists abandoned the parley and moved on the town in battle order.
Warwick's men approached directly on two roads, with part of York's forces taking the third road into town, whilst the rest of his men swung right to outflank the defences. Meanwhile Salisbury's force went wide of the town on the left.
The Lancastrians reacted to the threat. The king was in the central town square, with Northumberland there to keep an eye on him and use his forces to defend the roads into town. Buckingham moved to defend the left of the line and Clifford took the right.
My men under Warwick now came under bow fire from the prepared defences blocking the roads into St Albans and one unit of bill fell back "daunted". The rest of my force deployed skirmishers and archers and exchanged arrows, with only Warwick's men-at-arms having the armour to press on.
On our right, Chas got into some fighting near the church, but was forced back, whilst the bulk of his men continued to turn the flank.
Andy's force on our left, met with Jason's men, who had struck out of town to line the hedges. A lively battle ensued.
In the centre I tried to storm the barricades, but was getting the worst of it and all but my men-at-arms fell back.
Chas's flanking force on our right, was getting on better against Steve, but could not force him from the hedges.
Andy was still getting all medieval with Jason, but Jason's men held firm.
Suddenly Warwick's men-at-arms broke the bill facing them and were into the town, followed by my and Chas's skirmishers, who made mischief from the buildings.
Seeing their men break, another unit of bill ran from the Lancastrian centre and the king's men-at-arms were forced to take their place in line facing Warwick.
Warwick's men-at-arms were not exactly fresh, so I played the "concealed ditch" card, which gave them a defensive ditch to their front, should they be charged.
Things then suddenly collapsed on the King's side. Andy broke through on their right and Northumberland's men in the centre broke and ran.
At this point the Lancastrians threw in the towel and Warwick took the king under his and the white rose of York's protection.
A good game, but I have to say I found some parts of the rules confusing. I could have sworn we were losing and suddenly the opposition morale collapsed and they ran for the hills. Maybe I did not know what was going on ! Not an uncommon occurrence for a medieval commander I guess.
Nice to see so many pretty figures on the table. I was particularly impressed with Jason's "Contrast" painted Perry figures in the centre. So impressed, that I invested in some contrast paints the next day. Anything that speeds up my painting has to be good.
As always, many thanks to all who made it a fun game.
Vince
Posted by carojon at 14:57