The Leeward Line - Kiss Me Hardy

My first game back at the Devon Wargames Group after sixteen months away due to the pandemic lockdown restrictions was eagerly looked forward to, as much for the chance to catch up with friends and the banter and fun that is the hobby of wargaming as the game itself, a chance to warm up my planned game for Clotted Lard in September, the Warlord Games scenario 'The Leeward Line' played using Kiss Me Hardy from the Lardies.
I last played this scenario solo previously using War by Sail and decided it would make for a good game using Kiss Me Hardy at this year's Clotted Lard meeting together with my collection of 1:700th Warlord model ships, but was keen to run a play test to gauge how many moves of play could be realistically achieved in the three and a half hour slot I have to run it at the show.
In summary the scenario sets up the initial British attack at the Battle of Trafalgar when Vice Admiral Collingwood led his Lee Column of ships in the attack against Spanish Admiral Alava's rear squadron and some of the ships from the Squadron of Observation under French Rear-Admiral Magon.
The map below shows the section of the battle to be recreated. 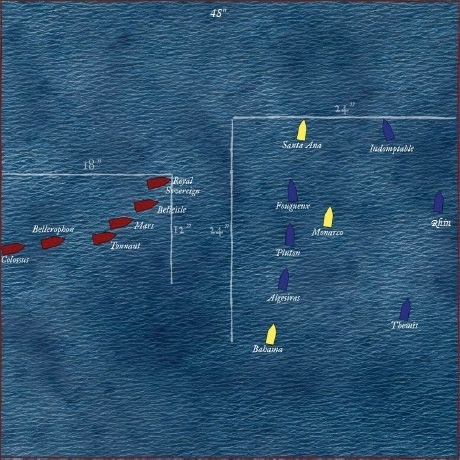 Along with the basic set up of the models, I also needed to produce some ship record sheets for Kiss Me Hardy that would enable me to see how easy it was for the players to get used to using them for recording ship damage through the game as well as finding the relevant information needed to play during it and the game duly showed me some changes I intend to make based on the feedback I got. 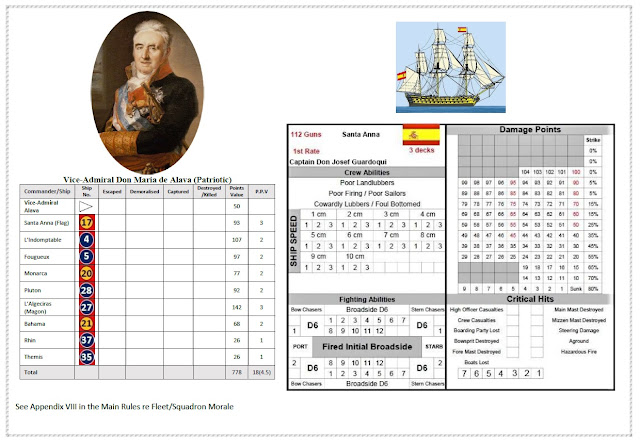 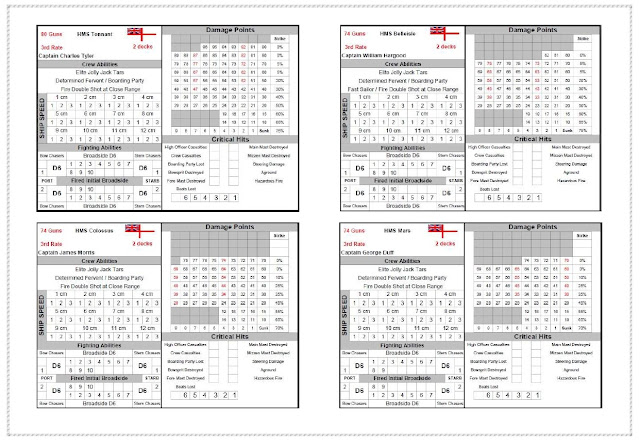 As well as confirming how many moves of play could be completed in the time allowed, together with the usefulness or not of the various player aids, I was keen to see how best to replicate the British approach phase as their ships run the gauntlet of the Combined Fleet attempting to shoot at their rigging and masts as they close on their line and how much time is left to fight the melee battle that will decide the level of victory.
As you will see Colin who ran the British sent his ships into the attack in echelon aiming to penetrate the line between each of the Franco-Spanish ships with the Nelsonian tactic of making a raking pass before luffing up alongside an enemy into wind to commence a close range artillery duel with the intent to cause a quick strike.
Bob and Steve commanding the Allies were equally intent on supporting each of their ships as best they could and looking to give as good as they got in the approach phase and the following melee, hoping to get the opportunity of fouling a British opponent and potentially boarding.
The game also has three admirals present in the form of Collingwood, Alava and Magon and a rule addition introduced by Nick Skinner in his Trafalgar game sees these leaders having to test to see if they are a notable casualty should their flagship suffer 'High Officer Casualties' as a special hit; and indeed Collingwood came close to being killed in the early rounds of the battle, when on turn three the foremast of the Royal Sovereign was toppled by fire from the Santa Anna and the British Admiral was one away on a D6 from being a fatality.

Other than that the three rounds of fire on the approach caused the inevitable slight to moderate damage to British rigging as the the melee developed along the line with the British ships administering close to short range broadsides and rakes as they passed, making the most of their first fire bonuses.
By turn four the British were eagerly hoping for the magic combination of having their firing chit out first with the option that gave to hold fire and to claim first fire over the opposition should their chit subsequently appear, along with the allies moving first so that they would have the luxury of lining up that perfect pass to deliver a close in stern or bow rake, knowing the enemy could do nothing but suck it up.
The Mars, seen above was one of those able to take advantage of such an opportunity and together with her consorts was able to deliver some hammering blows to the rear most Franco-Spanish ships that started to see their return fire slacken as the damage took effect.
However the British knew they had been in a fight with the Royal Sovereign thankful that her first-rate status gave her an unenviable ability to withstand the return fire she took as she closed on the allied line, although unable to deliver a punishing broadside to either Santa Anna or Indomptable and thus settling for joining in with Belleisle to deliver fire into the bow of Fougueux as her consort attacked her stern.

Turn five saw the British start to take control of the game with the five most rearward allied ships taking damage that was causing morale checks to creep ever closer to potential striking, particularly among the Spanish with Bahama and Monarca not only suffering morale deductions but much reduced gunnery for their return fire.
That however did not stop Steve sniping at the British with just a couple of gunnery D6 and not only hitting with both dice but getting the necessary 1 or 2 on a D10 to cause a critical hit check to boot.

We called the game at turn six with the allies teetering on failing their squadron morale check, a rule addition of my own to KMH to offer a potential cut off to this and other scenarios when one side or the other is clearly looking to break contact thus awarding the game to the other side.
I thought I would try and capture the feel of this first game back at the club and the happy babble of games going on in the background of our own with a video summary of our game. Unfortunately for some unknown reason I could not get YouTube to upload much of my footage but have included a short clip of the opening phases of our game to show what a game using 1:700th models looks like using Kiss Me Hardy which is scaled at very close to that of the models, 1:900th in fact or one inch to twenty yards as opposed to twenty five yards.
Thank you to Colin, Bob and Steve for a great return to club gaming that I and many others have really missed over the last sixteen months and a pint or two in the pub afterwards mixed with a bit of chat and banter put a fine top on the day.
Here's looking forward to Clotted Lard.
JJ
Posted by carojon at 18:36