Time again for another run out with my first ever proper wargaming army, the New Kingdom Egyptians
and after their recent fortuitous success against the Sea Peoples their opponents this time would be another
army that has, shall we say, taken me a little time to get onto the wargaming table since its first initial
purchase 15 years ago (I’m a slow painter.)

The Hittites. The Rules used were as usual Hail Caesar by Warlord Games and with the standard adaption’s for
playing with 15mm. 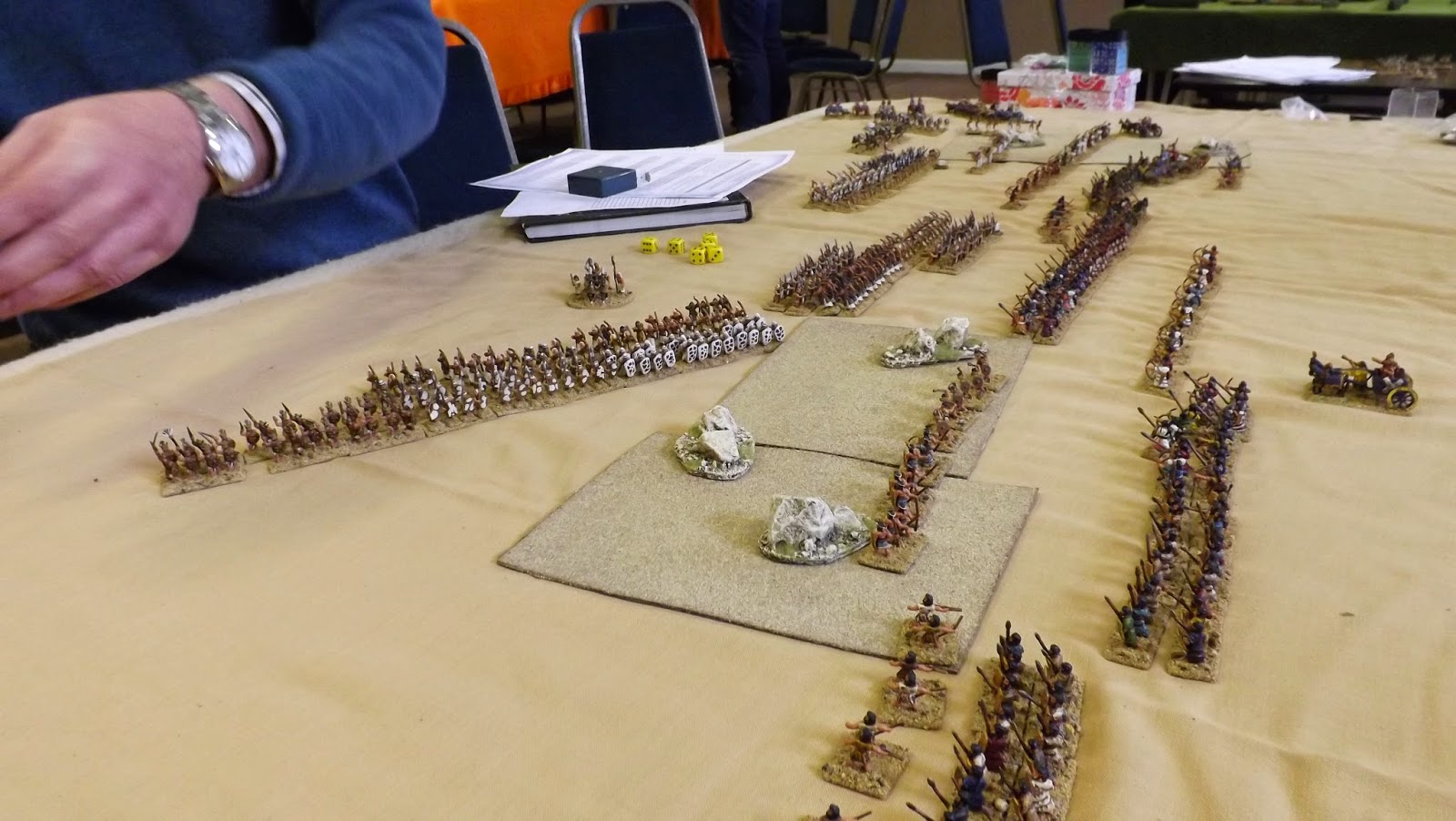 The Egyptians set up with all their chariots plus associated runners on their right, a centre consisting of
medium spearmen and medium archers and with their left being made up of Light archers, Marines and
Axemen.

The Hittites split their chariots equally onto both wings supported by some Long Spear infantry and
Light archers; the centre consisted of the Hittite Guard, more Long Spears and the Canaanite allies.
More Light archers screened the front along with the usual mix of skirmishers.


As is usual with our HC games everyone announced three moves straight ahead for their first move and
equally as usual no one achieved this, the Egyptian right even managed a blunder first turn and then
threw a 1 resulting in head long flight. Sensibly we let them stay on the table but Nathan playing his
first game of HC didn't seam to realise that double 6 command rolls was not a sound tactic as he
managed to throw another 2 during his time in charge, all be it not with such dramatic results as his
first; in fact we had a total of five blunders thrown in the game, a new record. (I have to admit that the
other two were done by me however a forced three moves headlong charge came just at the right time
for an other wise reluctant division and the other roll only affected one unit). 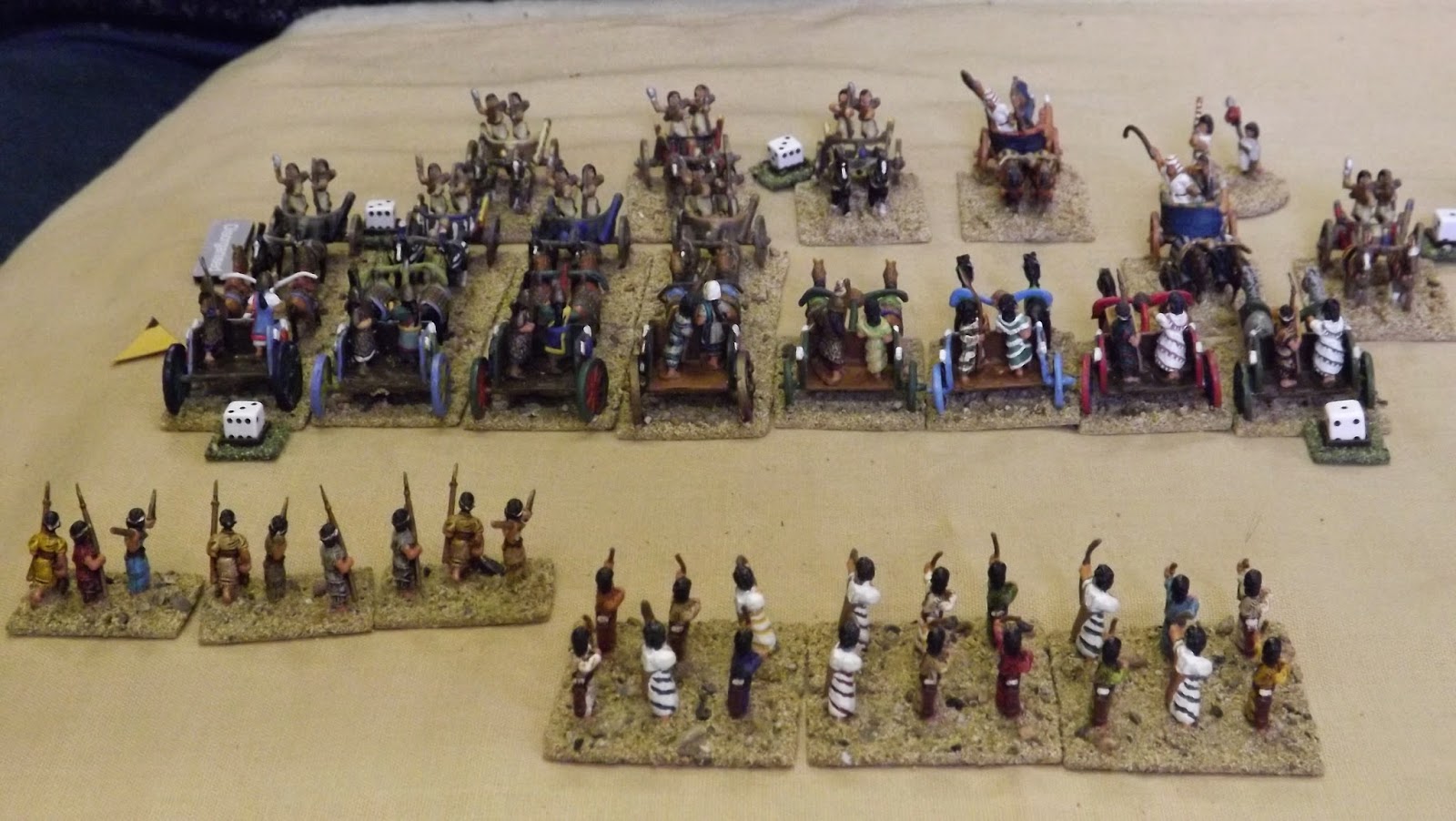 For this report it is easier for me to cover the game by describing each division’s action so first up is what happened on the Hittite left.

The Hittite chariots headed straight for their Egyptian counterparts who reciprocated but noticeably
hung back a little to try and utilise their archery, tension mounted across the table as both sides careful
jockeyed so as to time their charges along with the optimum positioning of supporting units. Strangely
it was during this time that a well aimed Hittite javelin hit one of the Egyptian unit leaders and the rest
of his men fled immediately causing a gap in the front line. (Nathan being a newboy to HC was given
only one instruction prior to the game. Don’t throw double 1 and you will be OK. He obviously wasn’t
listening.

Seeing an opportunity the Hittites charged and their more powerful chariots pushed the
Egyptians back, who quickly reforming (i.e. running away) onto the second line of Egyptian chariots
charged back in to the fight and it was they this time that made the Hittite Maryannu unit flee by
getting the infamous double 1 shooting morale roll. (see my opinion of shooting at the end). Desperate
fighting continued for several turns with both sides soon teetering on division collapse however the
imminent arrival of the Sherden Guard split off from the Egyptian centre looked like it would soon
swing it the wrong way (for us that is) 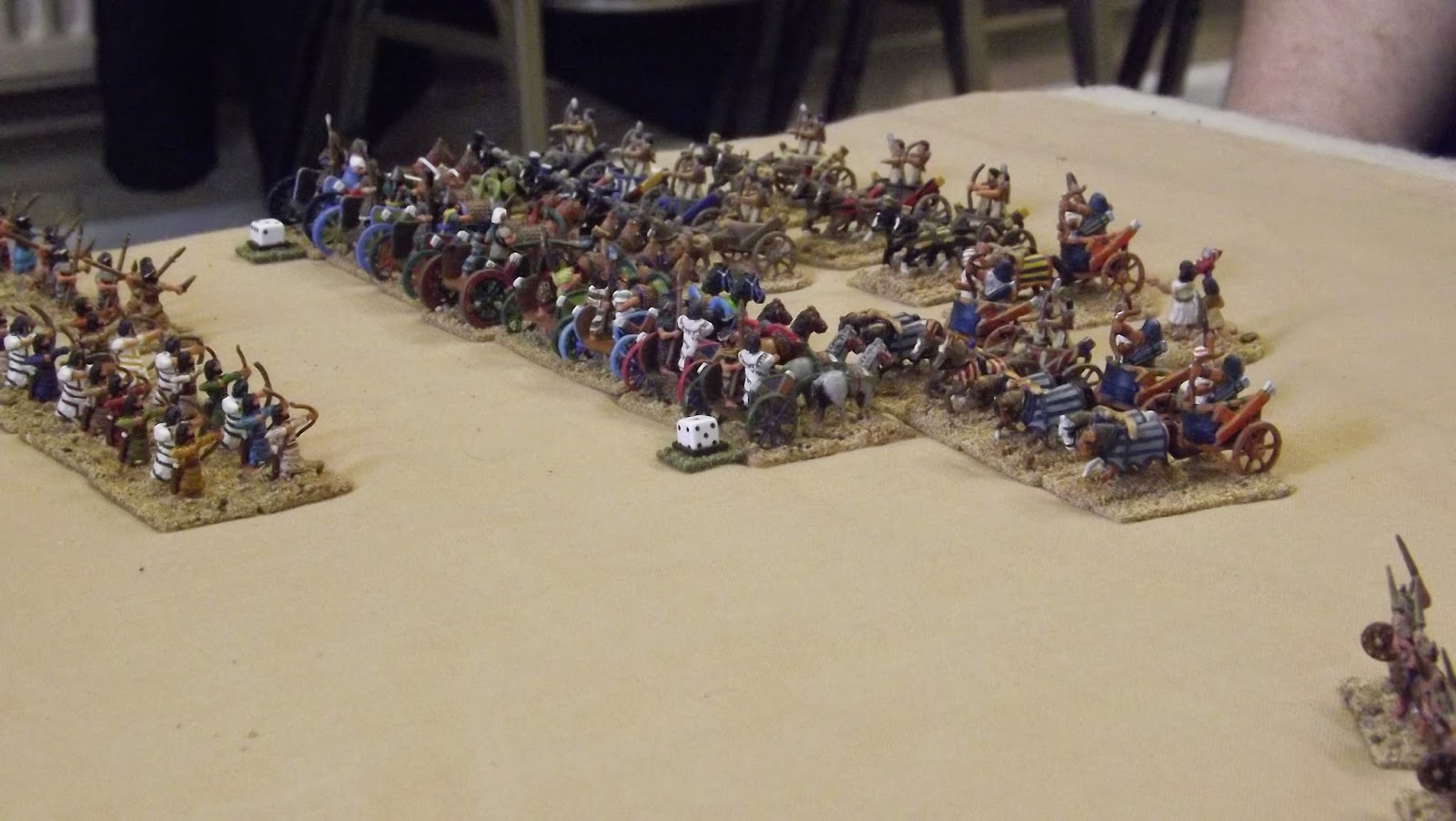 Nick had one final chance to break the Egyptians and threw everyone that could fight into one last
charge knowing that his flanks would be hanging but it was not enough, the Egyptians held and the
Sherdens smashed their way in breaking the Hittite left.

Finishing off the story for this side, the Egyptians though victorious were badly wrecked and although
valiantly trying to get across into the Hittite rear never made it in time, the Sherdens meanwhile rapidly
counter marched back to try and shore up a now collapsing centre.

The Centre; by my cunning use of what appeared to be incompetent manoeuvring I had lured the
Egyptians into an area bordering rough ground, I quickly occupied this with slingers and Habiru light
infantry pinning several of their units, whilst in the centre my mixed spear/archers disrupted various
Egyptians units and at a critical time saw one unit marooned out in front on its own. I smashed my line
into it, having suffered six more casualties than inflicted, it had little chance of passing morale and broke
immediately, this started a domino effect all along the front, the Egyptians were never able to get their
whole line into battle at the same time and although my initial thrust was now weakening (medium
infantry get quickly used up) I had the upper hand despite losing the odd unit. 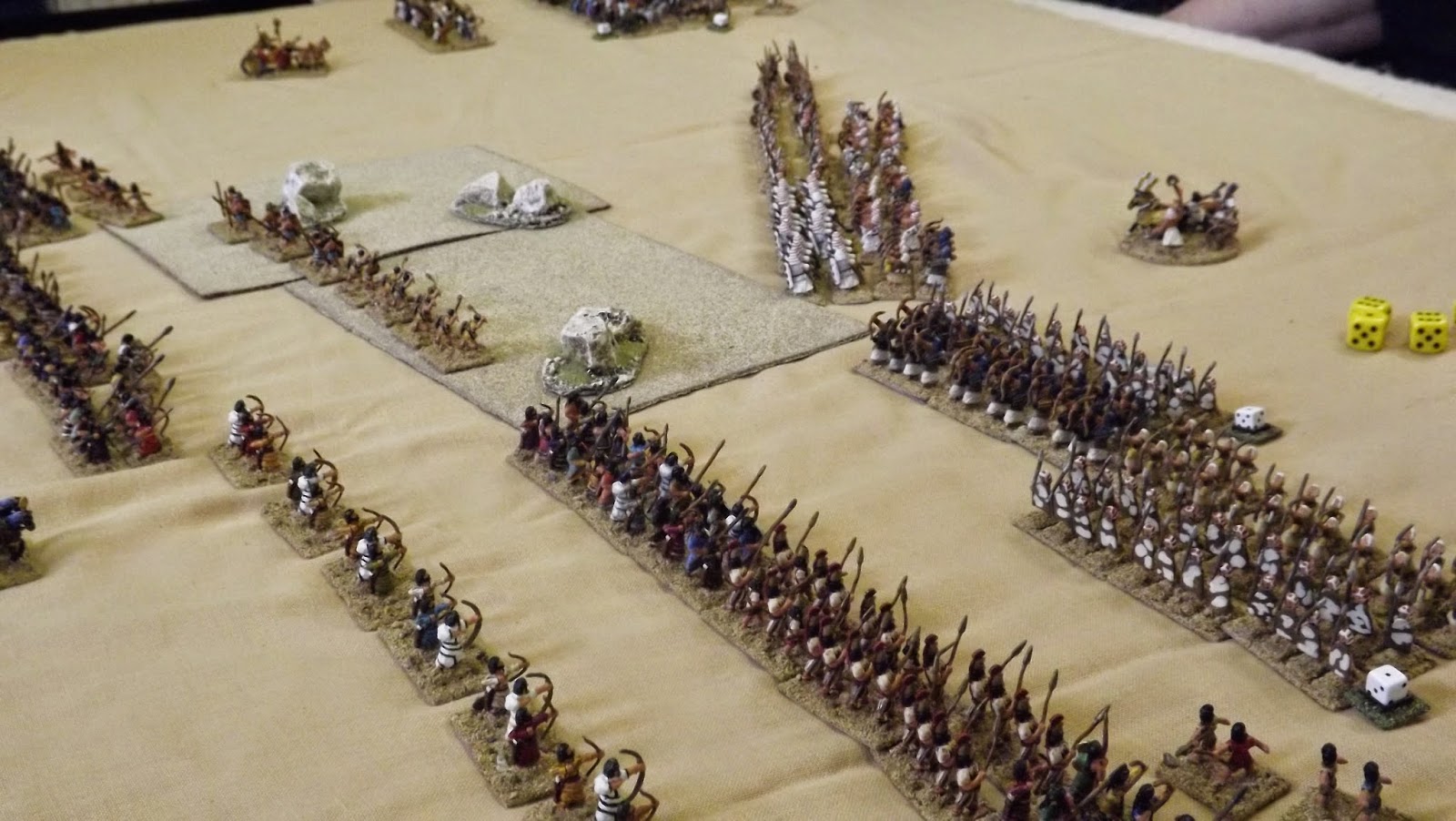 Diverting a unit of Long Spears and a convenient but very confused (read: hopelessly lost) right wing
chariot unit to guard against the possible intervention of the Egyptian right wing chariots , I consolidated
what usable units remained into a new battle line whilst waiting for the Hittite right to swing in.

The Hittite Right: There’s always one division that continually fails its movement dice and I suffered
all day with poor control on this wing, after a while this division was horrible split up (remember that
headlong blunder from earlier?)  and I was having to roll unit by unit every move , its surprising how
often a 9 comes up on two dice and I must admit I forgot about the "follow me" command which might
have helped to get things back into some sort of order . However the two Egyptian Light infantry
archers holding the flank weren't going to stop my chariots for ever, who it appeared were otherwise
engaged on an arrow collection mission, but eventually after a lot of cursing I finally got them going
and proceeded to break both of those annoying Kushite units, victorious at last I pushed on into the
Egyptian rear. Elsewhere the extra unit of Spears on this wing now helped by beating off the Marines
and with that result we broke this division. 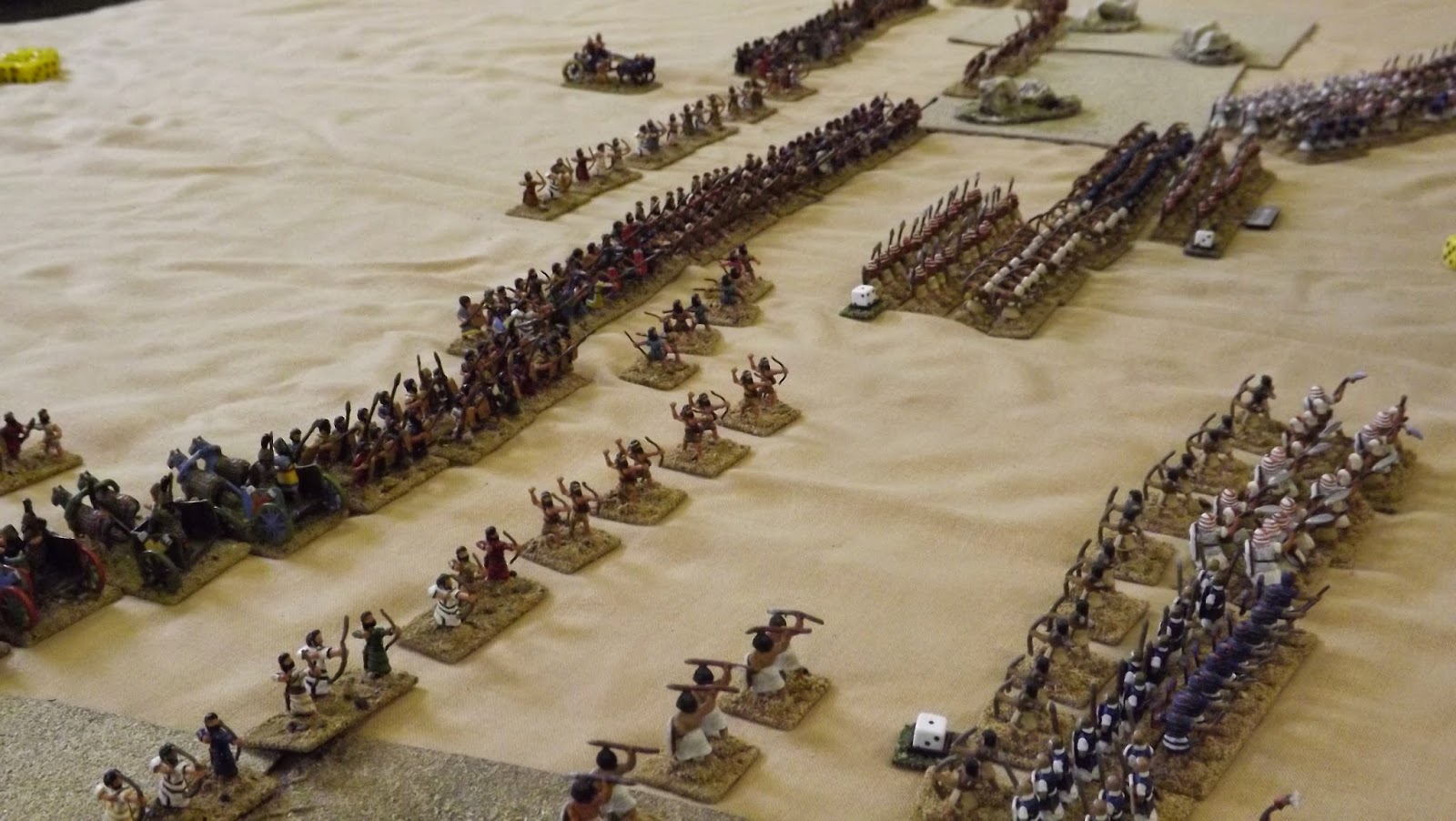 The Egyptian centre tried to re deploy away from the broken ground and form a new flank but the dice
had decided enough was enough and wanted to go home so refused to give the Pharaoh sufficient
moves to do so despite his repeated re-roll attempts. One unit of spears was also shaken so immediately
became the target for anyone that could throw or shoot something pointy and if it broke, then so would
the Egyptian centre .Oddly enough for two turns I either failed to hit it or if I did manage something
then Steve saved everything and therefore avoid having to take a tricky morale roll but eventually after
only getting a single move for his remaining infantry for the third turn running the Pharaoh decided to
concede the game. 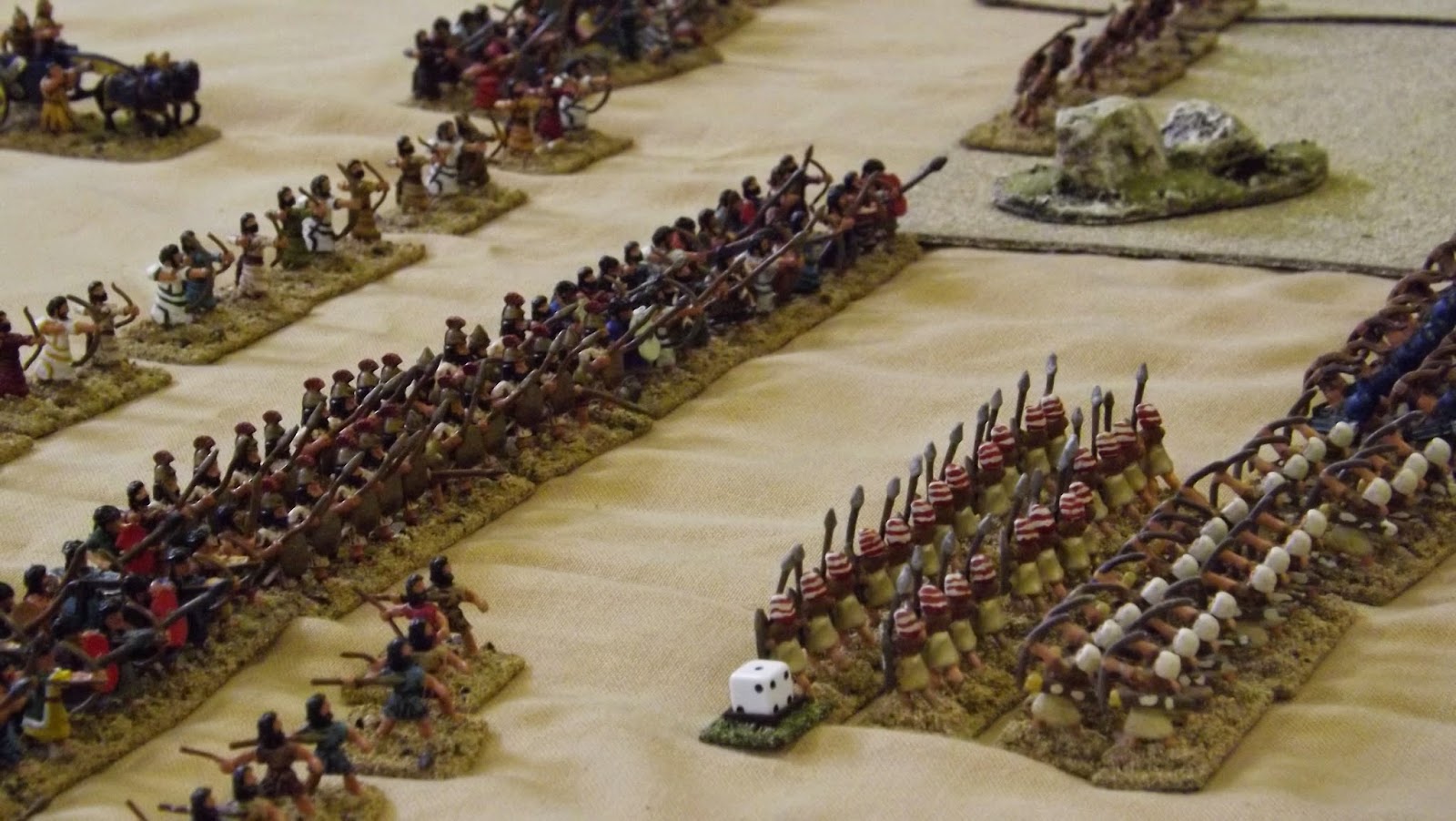 I guess I must be in double figures now for games using these rules and having switched all my
Ancient armies across to it and with more on the way it’s obviously my set of choice.

So far every game has been a bit of a blood bath with heavy casualties on both sides and I don’t expect
that to change, also we are still getting some rules wrong or haven’t understood them correctly, this
game for example we actually remembered that supporting units must also take a morale roll if its main
unit breaks and that it should use the same difference in dice when doing so. Also we have finally got
our head around the shooting morale rules; we have played around with it a lot as its felt that the effects
are too significant. Only requiring a single 6 to cause a morale roll seemed overly harsh but it must be
remembered that at long range you are usually hitting on 6 or worse (which therefore will require two
6’s for a morale roll to be made) and if you are daft enough to be sitting in javelin range then you
deserve all you get! Plus to get any really bad results for a normal unit then it’s only a double 1 (odd
that we managed to get this twice), and that it’s also the best way to get rid of those pesky skirmishers
who are treated more harshly on the shooting table. 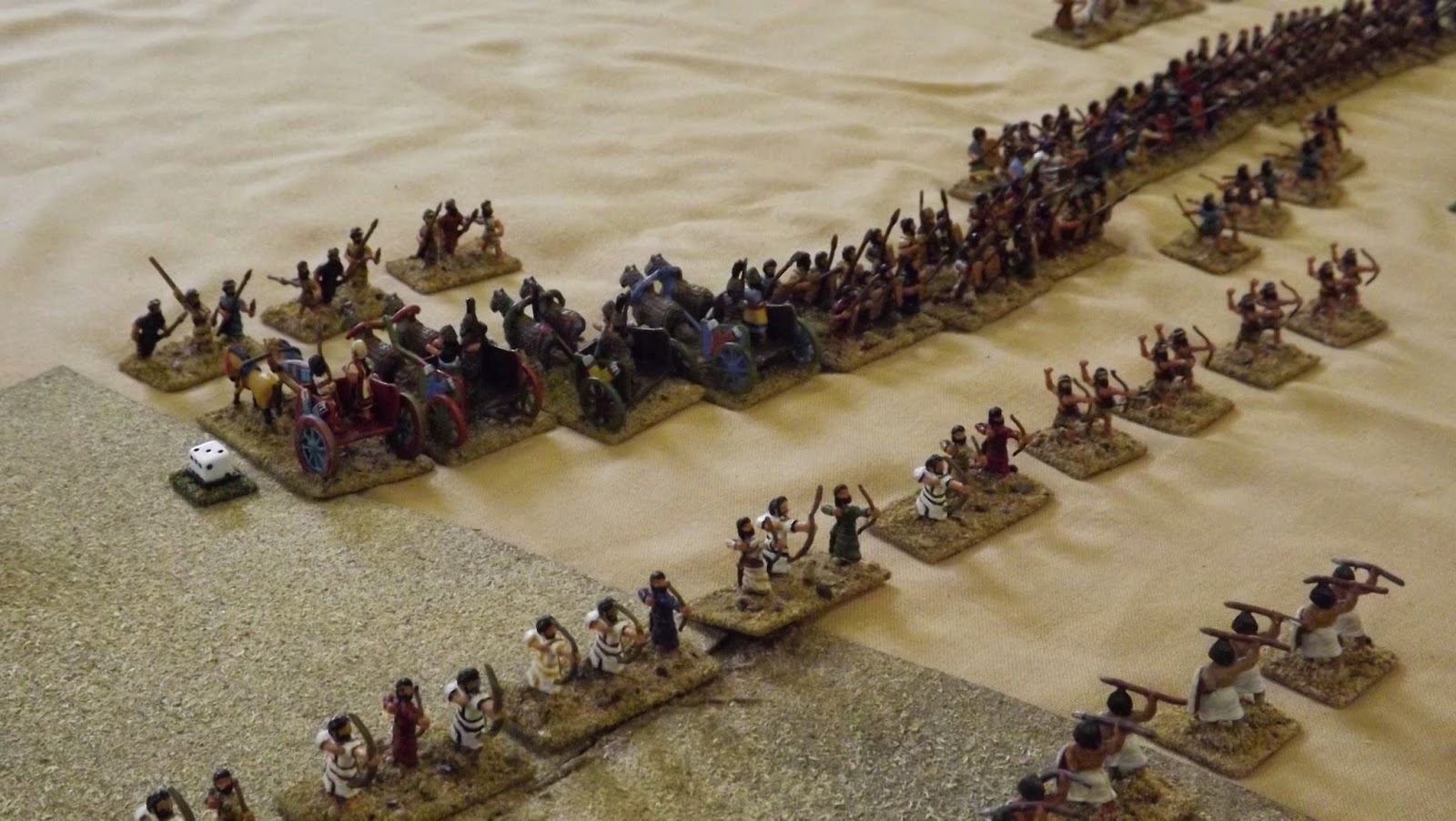 Finally, the rulebook which has been commentated on by several forums leaves, shall we say, some
lack of clarity regarding various aspects. I spent the best part of two hours over the weekend trying to
understand the rules on shattering units (it did come up in our game). To shatter a unit you need to
inflict double its stamina value in one turn, so that’s 8 for small units and 12 for standard, not very
likely. It appears that what we should have been playing is that once your unit reaches its stamina
level (of 4 or 6) it can be shattered if you then score a further four or six hits in one turn on top of its
carried balance. (Remember unless the unit had reached its maximum stamina level already then you
will have to discard/reallocate surplus hits). I can see this changing our next game a bit. 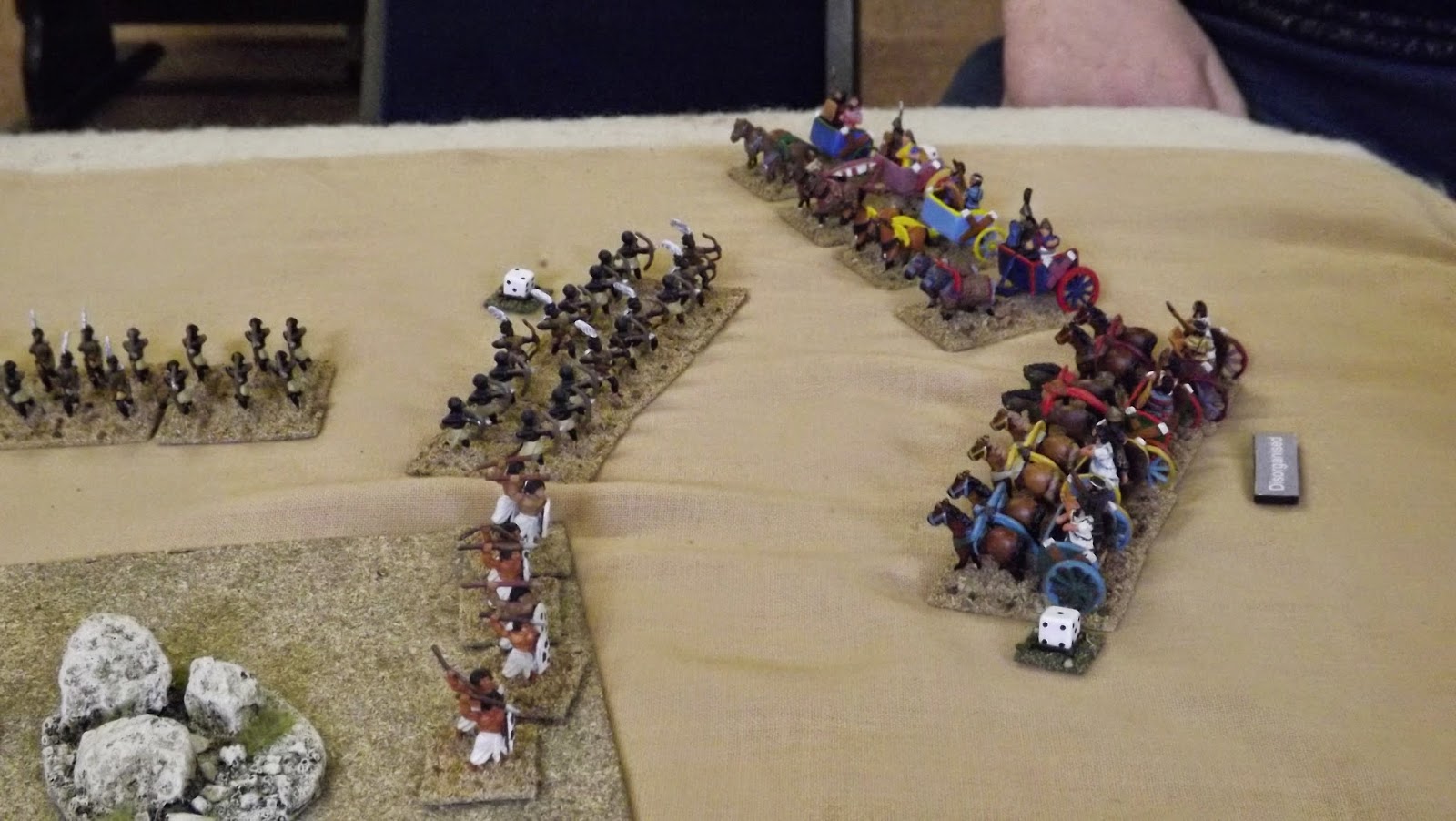 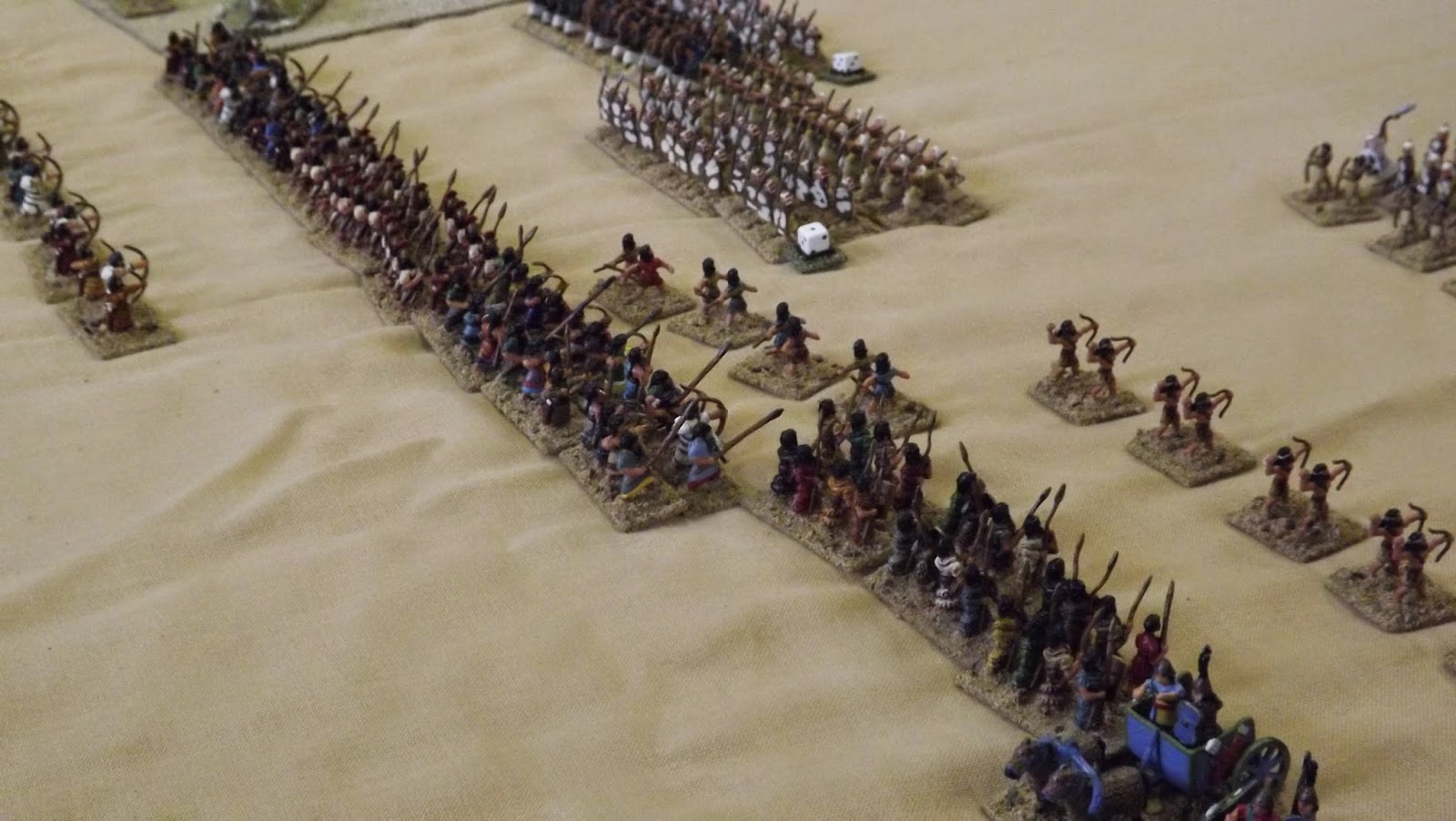 Thanks to Nathan, Nick and Steve H for taking part.
The 15mm Figures are my venerable Egyptians from before the internet era and the Hittites are from
the earlier Chariot Miniatures days finished off with the newer Magister Militum versions.

This has been a Mr Steve production.
Pictures by JJ
Posted by carojon at 15:58