Yesterday was my first go at running a game of Chain of Command using my 15mm collection of figures built around another Lardies rule set "I Aint Been Shot Mum".

The Chain of Command rules takes WWII combat down to the level of sections and platoons at a man to model level and is perfectly scaled for using with 15mm figures where the range of the weapons comes to life on a 6 x 4 foot table such as the one we played on yesterday.

The scenario we chose to play is the opening game from the "29 Let's Go Pint Sized Campaign" which recreates the fierce battle between the US 29th Infantry Division and the German 352nd Division along the lateral road between Omaha beach, Isigny and Carantan as the US forces in this area drove to link up with their comrades at Utah beach at the base of the Cherbourg peninsula. 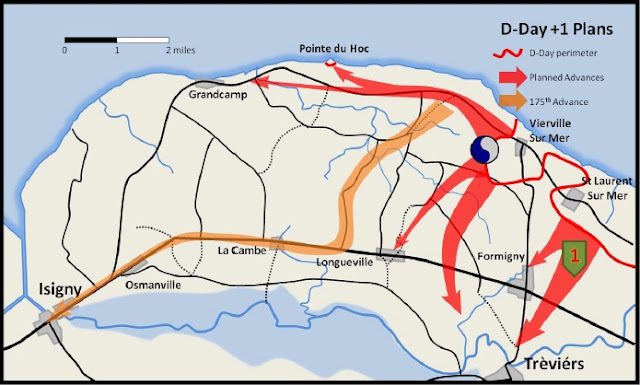 I have driven along this road when we visited the large German cemetery at La Cambe and am very familiar with the terrain consisting of open pasture land enclosed with light hedges, low walls and strong stone built Normandy houses. 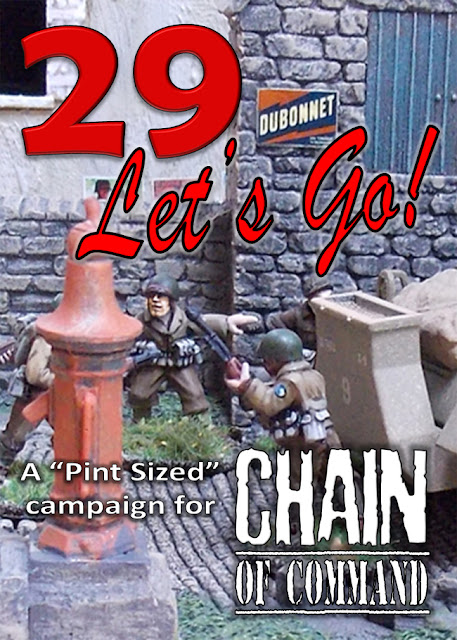 This scenario beautifully captures the initial probes to contact that were probably happening all along the allied front on the days following the D-Day landing as both sides felt each other positions out and tried to get a feel for the strength of the opposition. The mission in this game is fairly straightforward with the Americans looking to get a team off the German table edge and thus penetrate their forward outpost line, whilst the Germans are simply trying to frustrate the US probe. The open ground either side of the road between the two lines makes this a challenging fight.

With the patrol markers set up the patrol phase commenced as the two groups of markers moved forward and outwards and both sides attempted to claim the best forward positions whilst restricting the options for the enemy.

In no time the first infantry sections appeared on the table with the first US infantry groups deployed on the US right flank around and in the walled house.

On the opposite side the Germans deployed two sections along the hedge row later supported with a mortar FOO and a tripod mounted MG42 in the farm house window overlooking the road.

The German troops soon located the US infantry and poured in massed machine-gun and rifle fire on the walled house causing shock and casualties within and forcing a rethink in the American command team.

With the heavy German fire, zipping across from the opposite hedge row and buildings by the road, the US commander called for support from his tankers to get the advance moving. The two Shermans edged on to the road like two nervous debutantes at their first seasons ball.

Once the two US tanks had sized the situation up, retribution was swift and punishing as 75mm shells smashed into the farm window directly ahead, down the road, silencing the MG42 team, and driving the surviving crew downstairs and out the back of the building to recover from the shock.

With smoke pouring from the window of the farm and German attention drawn to the arrival of the two US tanks an American sniper team took advantage of the newcomers opening salvo to climb to the top of a nearby shattered house and scan the opposite hedgerow for inviting targets.

With the first casualties inflicted both sides paused to draw breath and consider their options and to rally their shocked troops.

The American tanks and sniper had made things rather uncomfortable in the German lines, whilst the volume of fire from the German troops had forced the US infantry to hug the available cover.

The response from the two forces reflected the opposition presented, with the German FOO calling in a barrage from the 81mm mortar platoon supporting the forward lines, that landed full square amid the US position causing some shock and indirectly leading to the walled house catching fire, which had a much larger impact on the game.

The Americans meanwhile started to move their infantry across the back of the hill and in towards the road to link more closely with their tanks and take advantage of the cover presented by the smoke from the burning house.

The German mortar support was short lived as the the FOO lost contact with his platoon as it shifted support elsewhere along the front. The American commander attempted to call for mortar support himself but the US FOO team were quickly identified by the forward German troops and knocked out by mass small arms fire.

As the US infantry massed near the road in support of their tanks, the two Shermans continued to cause havoc with their 75mm guns and machine-guns as they sprayed their fire on the closest hedgerow.

With a wall of smoke billowing across the table the two forces began to make their moves to end the battle.

With the area around the walled house devoid of US infantry, a German infantry section set off across the field aimed at capturing the nearby US jump off point and knock down the US moral count.

Meanwhile the US infantry hopped across the road as their tanks provided covering fire on German troops attempting to reposition to cover the US flanking attack.

With both sides flanking manoeuvres forcing the issue, chances were being taken and the American tanks, being the fastest units on the table, made their move to seal the deal before the Germans could break their declining force morale.

With its supporting tank providing covering fire and drawing MG42 fire from the now rallied German team, that caused it to pull back at one stage. the second US tank drove out into the open field on the US left flank.

Suddenly there was a crack and loud explosion as the move drew fire from an off table 88mm German flak gun. Incredibly the gun missed and directing its turret towards the threat, the Sherman fired off a smoke screen of its own.

With the threat of a US win if the lone Sherman managed to get off the the German table edge, German infantry threw caution to the wind as they quickly rushed men over to their threatened right flank. Although the 88mm FlaK had missed, the German commander looked confident at being able to stop this desperate US gamble.

The US jump off point on their right flank fell to German infantry and deducted two points of their force morale as their own attack on the German right flank threatened to snatch victory. A German Panzerschreck team sprinted across the farm yard and knelt to take aim at the approaching tank. The pressure was too much and the rocket streaked over the rear deck of the Sherman. Other German infantry could be seen moving out of the buildings and with his objective in reach the US tankie put the metal to the floor requiring just a score of 7 on three d6 and that was then it rolled 4!

The Sherman crew didn't have to wait long to realise that they had just snatched defeat from the jaws of victory. The German squad that had debouched from the farm showed the Panzerschreck boys how to do it as their own Panzerfaust bomb smacked into the side of the American tank and ended the game.

Chain of Command is a brilliantly crafted set of rules that produced a nail bitter of a finish and left Tom bemoaning his luck despite the charmed life his Sherman led up to its final demise. Great fun.

Thanks to Jason and Nathan, two long standing aficionados of all things Lardy, who led us through the rules with great aplomb, also to Tom, Ollie and Jack for adding to the fun of the day.
Posted by carojon at 10:40