The third game featured at the August meeting of the club was an 'I Aint Been Shot Mum' scenario taken from Robert Avery's campaign booklet 'Blenneville or Bust', staged by Ian with his collection of Normandy WWII 15mm figures and followed with a report on how the game played out. 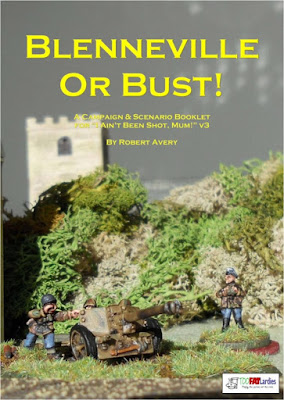 Blenneville or Bust - Too Fat Lardies 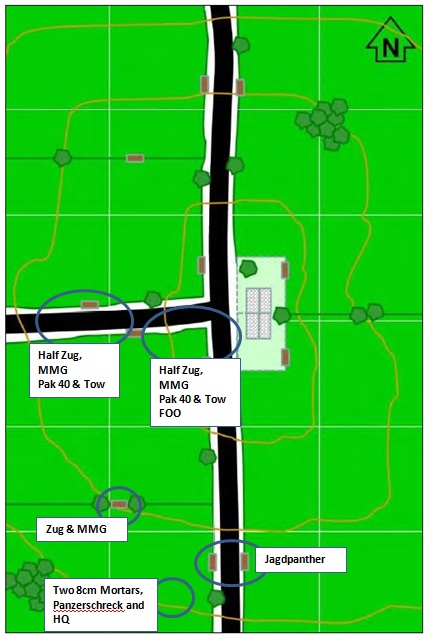 The scenario called for Fallschirmjagers but due to their unavailability for this mission the SS
stepped in to the fray. These were still classed as elite to avoid unbalancing the scenario, giving them
four initiative dice.

The British objective was to remove all enemy opposition to travel along the main roads. This was
achieved if the Germans had no on-table units which could shoot with more than two initiative dice,
which meant degrading each German infantry unit by 50% - a big ask!

The terrain favoured the defenders as all hedges were considered bocage and terrain in between
(the fields) were broken terrain - this severely restricted British movement. Visibility, unless on top
of the hill or in the buildings, was restricted from one hedgerow to the next – dense stuff this
bocage!

Although facing two troops of Sherman tanks with a company HQ (ten tanks) the Germans had plenty of powerful anti-tank capability; namely a beast of a Jagdpanther, two PaK 40 and two fearsome Panzerschrek teams. The Germans also had the opportunity to deploy a ‘forlorn hope’ of one rifle gruppe and one of the Panzerschrek in the wood in the NE corner, close to the British edge; which would have caused havoc being deployed off a blind with the four actions!

Apart from the ‘forlorn hope’, the Germans had to deploy south of the hedge in the NW quarter and
west of the main road. In reality, they deployed quite away back in the east-west spur road; behind
the east-west southern hedge and with the Jagdpanther as the backstop with the Kompanie HQ (less
one Panzerschrek) close by! The German starting positions are marked on the map above.

Due to the rearward deployment of the German forces the British, who could bring on three blinds
each time their card was drawn, had a fairly free run. The British entered the first three blinds with
one on the road with one in the fields either side. These blinds benefited from the rapid deployment
card, which appeared with regularity. As a consequence these blinds reached the west most
northern hedge and the houses undetected.

On their way in they managed to successfully recce the hedges at the road junction revealing the FOO and half of Zug One. Due to constricted positions of this Zug and the FOO, German reconnaissance was poor. Ultimately they identified one of the blinds in the houses to be a dummy and the other to contain British infantry. What a shame they didn't take the opportunity to occupy the houses on their first activation. This would have given them all round visibility making spotting so much easier – but fear of being targeted deterred the Germans from carryout this manoeuvre.

With few troops on the table and hence few cards, the tea break card made regular appearances –
as did the British blinds card. As a consequence the blinds were ‘flooding’ on to the table.

The Germans in the spur road did eventually manage to spot a blind on the British right, which
turned out to be a platoon of infantry. The sight of this platoon caused the cautious Germans to pull
back the half Zug, retreating towards the southern hedgerow but leaving the machine gun and PaK
40 in the lane. The British, still making good use of their rapid deployment card, quickly deployed off
a blind and poured withering fire into the PaK 40 crew, causing four points of shock and pinning it.
Unable to move and with no Big Man nearby to remove shock, this ultimately sealed the fate of the
gun.

The British also made some useful employment of their off board 25 pounders causing various
casualties and shock. However many times the Tea break appeared the British air-support card just
failed to appear – maybe the weather gods were trying to give the Germans a chance! For the
Germans, they did not take any opportunity to unleash their powerful off-board 12cm mortars.

Meanwhile, on the British left flank the blinds were making rapid, unopposed movement but one
was eventually spotted revealing a troop of tanks. The Jagdpanther took a shot at the Firefly but
regrettably for the crew they missed. Retribution was not long in coming. The next time the British
armour card was drawn it only took one round of Firefly shooting to destroy the German behemoth!

With the British now starting to overwhelm the German infantry, and with their prized asset burning
like a roman candle, the Germans admitted defeat.

On another day, with the Germans feeling more emboldened, I am sure the British would have to
pay a high price to achieve their objective.

Thank you to Nathan and Steve for playing the game and to Nathan for the loan of a rather ‘fragile’
Jagdpanther and a grounded Typhoon!
Posted by carojon at 08:31