The final two bags I have to show you are of the two types of Ottoman cavalry I bought , I only got 2 of the 5 types available as these are the ones that I will using the most off , Siphai and Tartars.
Plus I can show comparison pics of some Siphai I had already bought  from "By Fire and Sword" ( through Wayland Games) , I am hoping that I can use figures from their Ottoman and Cossack Renaissance range to cover gaps in the Old Glory 7YW range.

The pack comes with both Lance and Sword armed figures which is a bit annoying as I wanted all my Siphai to have lances , or at the very least 75% , which would have been Ok. The Command figures are also a little disappointing as you just get an officer and a flagman.
Next are the Alternatives I looked at from By Fire and Sword , they have 2 versions of European Sipahi available , with or without Lances , I needed to find some figures I could use to represent Provincial Cavalry which in the KK army lists don't have Lances ,so I bought the no lance version. What I could do is to transfer some of the OG Swordsman into this unit and maybe use the Donnington samples (see below) .

By Fire and Sword have recently changed their packs sizes from 18 figures to 9 ,  I got caught up in the middle of this and eventually I received 2 packs of 9 , the contents are similar in each pack apart from the flag design .The one problem I have with these figures is the man to horse size ratio , The horses are big , I have some comparison pictures against Old Glory but I am not sure I get across the problem very well .

I think the horses are too big for my taste as they tower over the OG versions , so when I went to the Devizes show recently  I bought a handful of Ottoman Sipahi cavalry from Donnington so that I could look at their horses as a possible substitute , the picture below shows the same By F&S rider on 3 different horses


What I might do is get my hands on a batch of Old Glory horses and re-mount whatever By Fire and Sword cavalry I pick up. Whilst a unit all riding the same size horses wouldn't stand out on their own, they will look out of place amongst an army.


Finally for now are the Tartars , these are from the 7YW range as Timecast didn't have any of the Renaissance versions in stock which prevented me from doing a quick side by side comparison , these look Ok for what I want ,probably a few too many bowmen if I had to be picky , I would have liked a few swordsmen/pistols for variation. 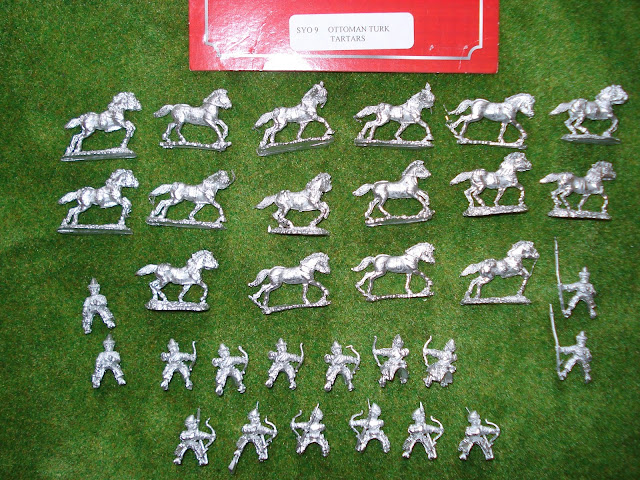 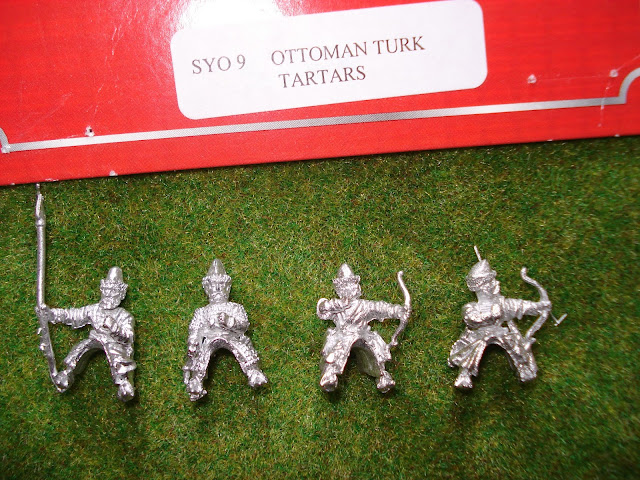 That's it now for (who shouted Hooray ?) until I start the Russians sometime in the next 9 months and as there are no pictures available for this range either , I will try and remember to post something up when I buy the figures . I did however buy one pack of Russian Musketeers which I am currently painting up , first impressions are that the figures must be reasonable new molds as they are quite crisp.
Posted by Mr Steve at 18:10