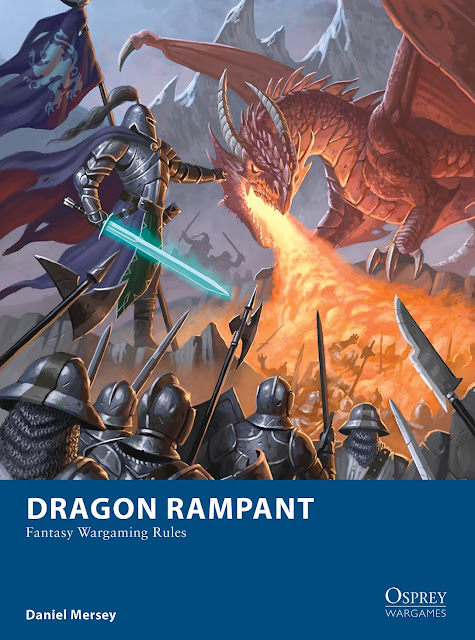 With a replacement game required for the March Club meeting, Jason kindly stepped forward and offered to put on a few games using Ospreys Fantasy rules, Dragon Rampant. I was the first to put my hand up to play as I didn't want to miss out on this rare opportunity to play Fantasy again plus it was a great chance to have a look at a set of rules that I had heard good things about, mainly from other club members saying how much they enjoyed the original set, Lion Rampant, which this set is a spin off from. Now I can just about remember the olden times when Warhammer was played by ordinary people and not only by those who had won the Euro Millions Lottery, so I hoped that this new set would allow me to get my Skeletons out of the cupboard a bit more often. 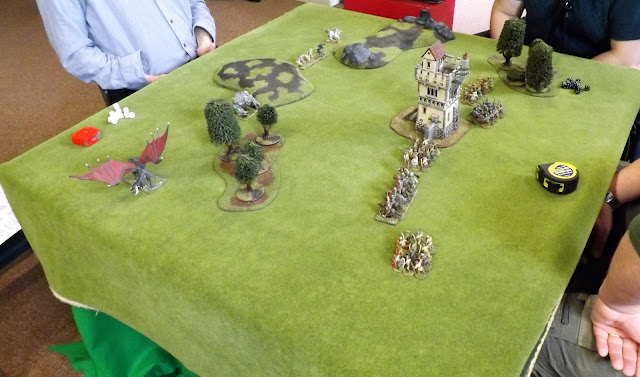 In the first game I had a Dragon, an Earth Elemental, Bob the Unicorn and three Werewolves facing off against three units of assorted Light and Heavy Infantry, a unit of cavalry and some archers.

Knowing absolutely nothing, I went into the game with two bits of advice passed on from Lion Rampant players, some troops fight much better when they are defending rather than when attacking and visa versa and secondly that archers were potentially very dangerous. That’s it; with no idea at all on the rules I was going to have to rely heavily on my incredible intelligence to pick things up fast. 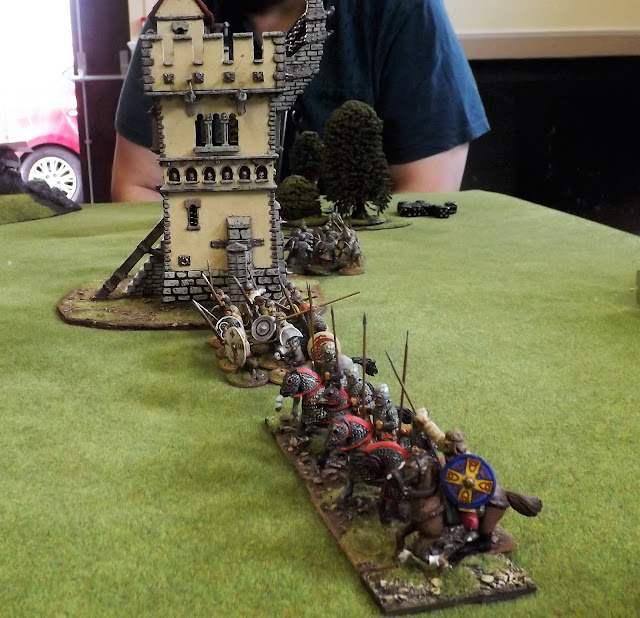 Fortunately the rules are very easy to get your head around ; every turn you can activate each of
your units individually and you then pick one of the various actions that it can do, like move, attack, shoot etc. and to do this action you then throw two dice and achieve a certain target number, so my Dragon needed a 6+ to move, 5+ to attack etc., if you fail then that’s it for everyone else for that turn so it’s a good idea to make sure you do the important stuff first.

In melee both sides fight as either an attacker or a defender depending on whose turn it is, so using my Dragon again, it hits on 3+ when attacking but it is a useless defender as when my opponent attacks me in their turn it needs to throw 6’s to hit ! Spearmen and others defend better than they attack so this can effect your actions. Everyone who is above half strength will throw twelve dice per fight, if below half strength then you only get to throw six dice so it’s quick and bloody. Your units armour rating determines the number of hits that are required before you have to remove a figure, so if your amour rating is 3 then you will lose a figure for every three hits (Single figure monsters require some method of recording hits). In general you will have either six or twelve ‘lives ‘per unit.

Units have a morale score which is called Courage, my Dragons Courage was 3+ which is pretty good and when required I would need to equal this with two dice minus any ongoing hits, score under this figure and you will have to retreat battered needing to take a rally action in future turns, get to zero and you are routed off. Easily done when the highest I ever threw for it was 4.

So in this first game we learned all this as we went along and so made countless wrong decisions, for example my Dragon allowed itself to be charged by the cavalry resulting in it taking a lot of hits and doing very little in return , it then repeatedly failed its morale until I was forced to threw it across the room (don’t you mean removed from the game: Ed. ), I attacked with troops when I should have sat back and instead waited for them to be attacked and I hid a lot from his archers until I realised Andy couldn't throw his required shooting activation score if he had all day to do it. 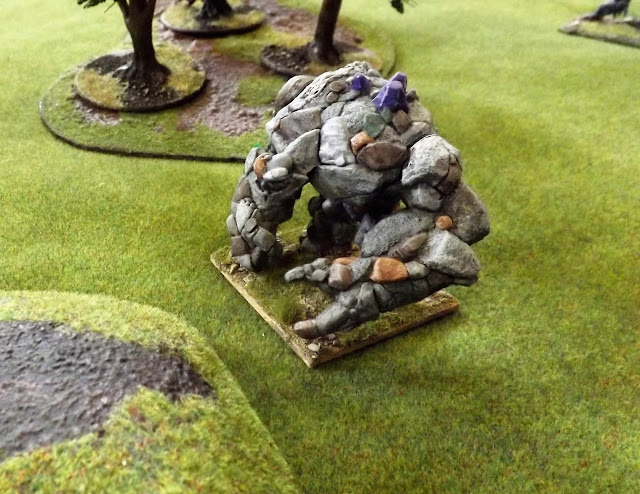 This first game ended up with just three figures on the table, Bob the Unicorn fighting the last two
cavalry figures and with them both being at half strength and neither apparently ever going to fail a morale throw again it was a struggle to inflict enough hits until I then rolled six hits. Hooray!
Bob saves the day and was the only figure left on the table.

Game Two was therefore going to be better as now we all knew what we were doing, I played as Dwarves and proceeded to got thoroughly stuffed, very quickly, however I did go down fighting, I put my last remaining unit into Wall of Spears/Shield or whatever its called which gave me a plus on my armour rating and then refused to move as there are no flank or rear attacks to worry about in this game .The unit defended on 4+ and only attacked at 5+ so I wasn't going anywhere. With odds of four to one they managed to beat off two skeleton units but I was eventually worn down by some difficult to kill Wight’s and with the hits piling up, my Courage at last failed me and they routed off. Total figures on the board at the end of Game Two: Three. 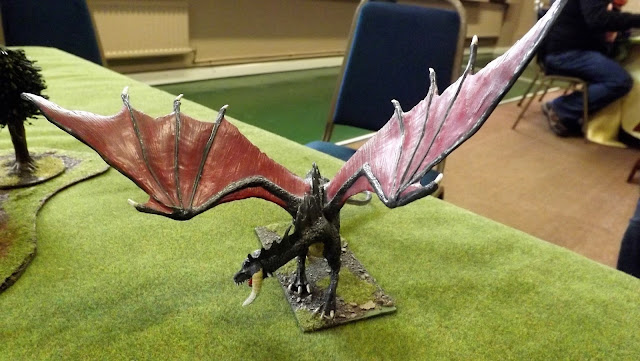 Having only played two games starting from zero knowledge we probably did a few things slightly
wrong whenever Jason wasn't looking or paying proper attention but that is about all you normally get for a new set of rules to see if they grab you or not.

What do I think of the Rules?

They are fun and give a quick game and I will be very happy to play them again but they are not what I am looking for in a wargame.

What do I mean? well I have spent the last four days trying to think of the right way to explain my point but then I gave up as I have far better things to do, perhaps they are just too quick and maybe everything was too simplified but it’s not easy so I am going back to what I just wrote, I played an enjoyable game but to me it wasn't a wargame.

Now before you leap to their defence I would like to make two points first.
1. I don’t care what you think, damn peasants! Who do you think you are?
2. I can see the postman walking towards my house with my new set of Dragon Rampant (£7.84 from Wordery). 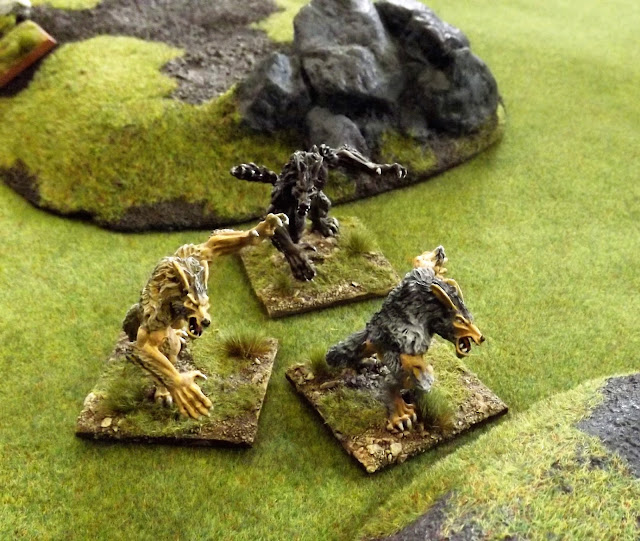 I think I might enjoy getting the old Warhammer stuff out again after all these years and foresee having many a fun game with friends along with, no doubt, copious bottles of discussion juice. 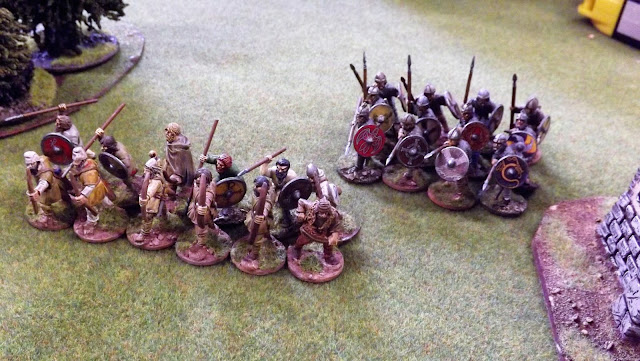 Now having the rules and read them through twice, there is also a section on spell casters and various spells that add a bit more depth and I look forward to trying them out but it still doesn't change my initial conclusion.

I wonder what effect twenty odd more pages would have had.

This has been a Mr Steve production, in association with 21st Century JJ
Posted by carojon at 09:18