Siege of Lille 4th September 1708 - Beneath the Lilly Banners v3

Chas took us to back to his days in Louis XIV army and the siege of Lille. 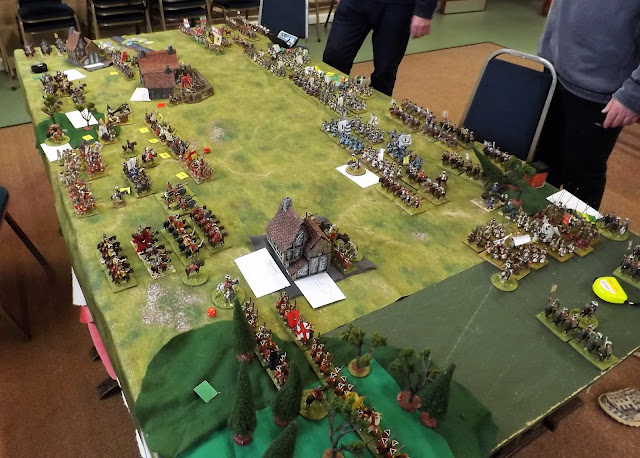 Eugene had completed lines of circumvallation round Lille and had been investing the city with a force of 53 battalions of infantry, 90 squadrons of cavalry and over 100 artillery pieces. 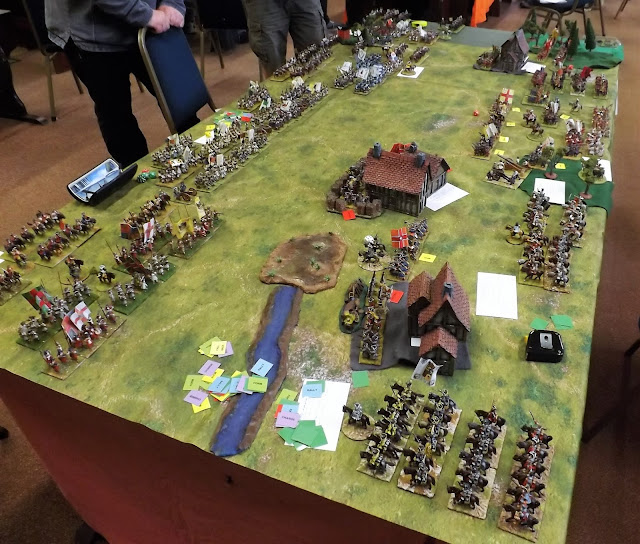 Marlborough meanwhile, commanded a force of 69 battalions, 140 squadrons and a few batteries of
artillery, some miles away, blocking any French relief force approaching from the south. 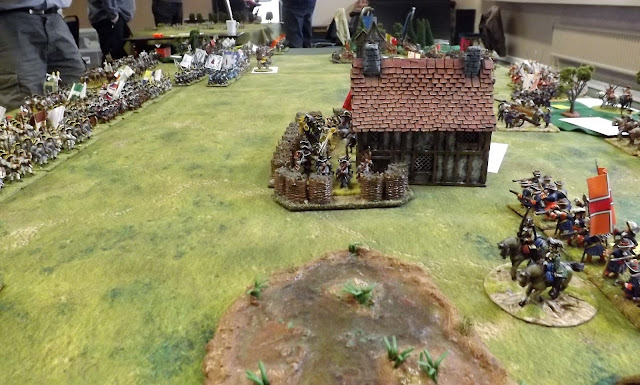 On the 29th of August, two French armies joined at Grammont and marched on Marlborough's
position. On the afternoon of the 4th of September this force came within sight of Marlborough's lines. 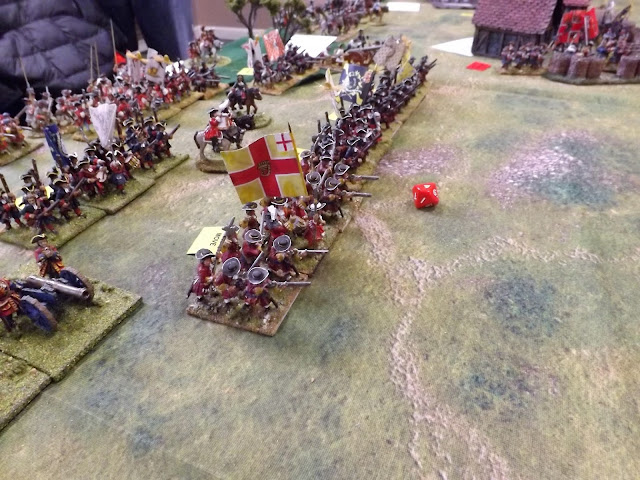 The French were not all in position, but still outnumbered the duke by more than two to one.
Both Berwick & Vandome judged it too late in the day to attack and resolved to give battle the
following day, when all their force had arrived. 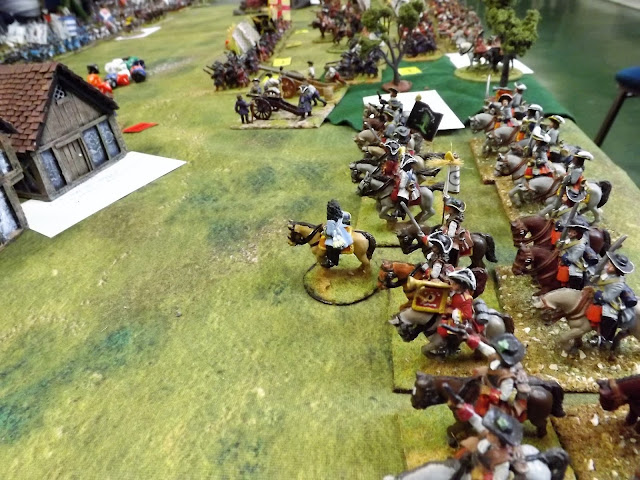 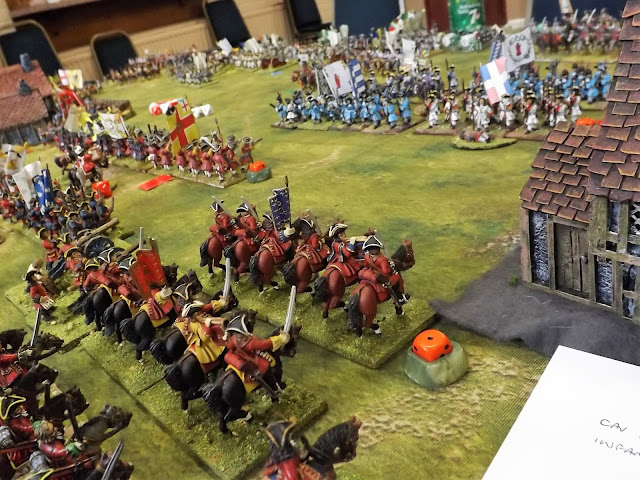 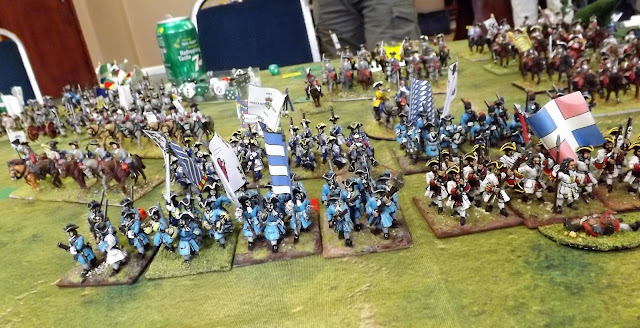 Our "what if" battle assumed the French arrived earlier on the 4th September and attacked, with an
urgent request being sent to Eugene at first sight of the enemy. 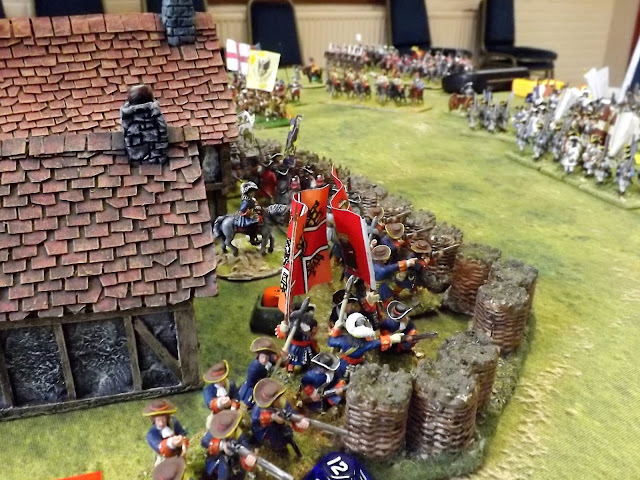 Chas and Si played the dastardly French (I can't say Si's heart was in it) and myself and Nick took the
Allies. 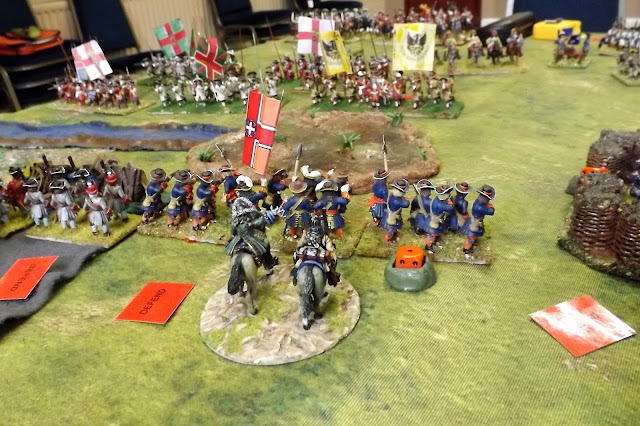 Our forward line was anchored on two hamlets and a fortified village, which were garrisoned by infantry.

The main Allied body deployed from the table edge and moved to cover the gaps round the built up
areas. 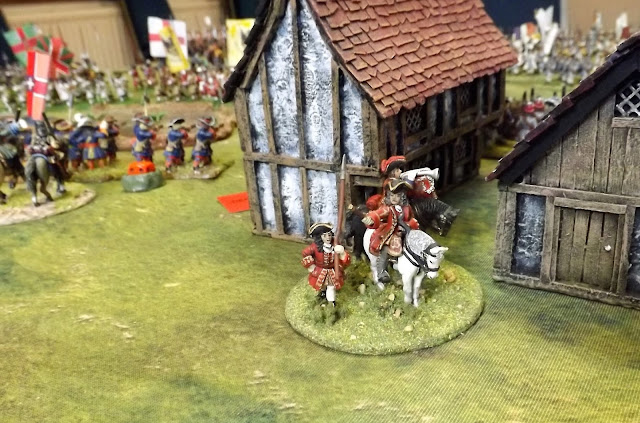 Both side's artillery were soon firing and the Allied infantry in the houses were soon glad of the hard
cover. With few Allied guns available to reply, the casualty count was in favour of the French. 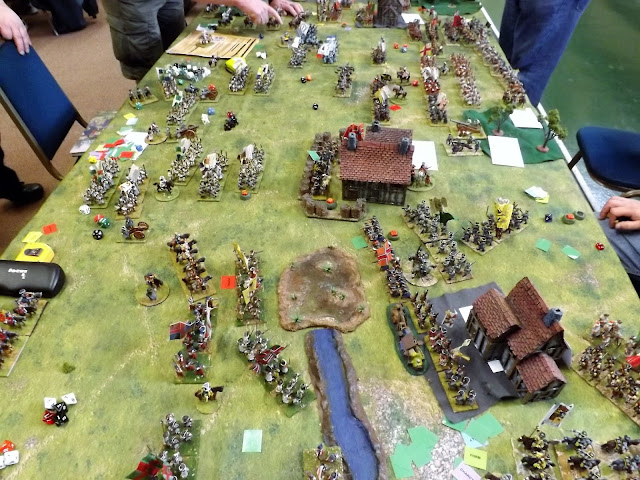 French infantry now joined in with musket fire and a Dutch Guard battalion was starting to suffer.
With everyone but Chas agreeing that cavalry couldn't hope to take on fresh infantry, Chas decided to
throw the manual out of the window and charge the British infantry under Nick with cavalry. Slowly
but surely a full cavalry brigade was fed into the meat grinder, blown away by squadron and
consigned to the casualty roster. It looked like everyone else was right. 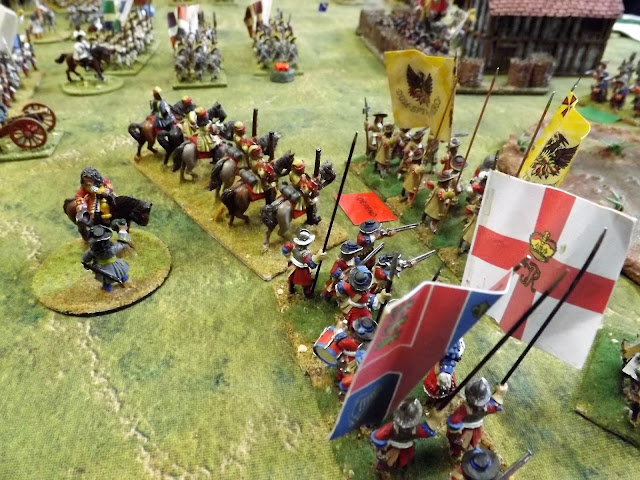 Undaunted, Chas charged one of the hamlets, bounced, charged again, routed and moved up a fresh
battalion. Rinse and repeat. You get the idea. 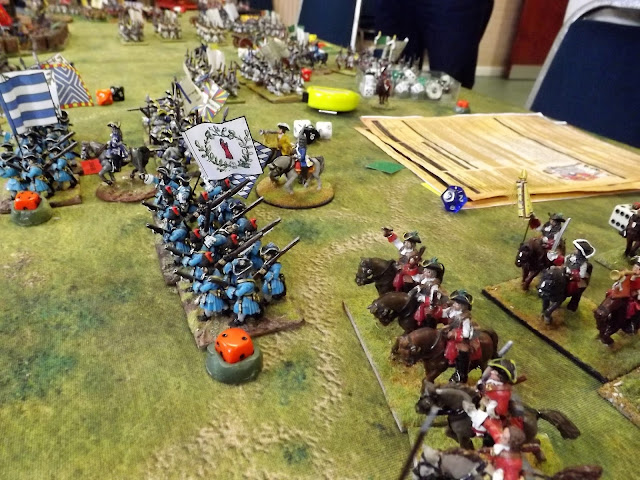 Meanwhile, with Eugene's newly arrived battalions moving up, the Dutch Guard battalion was given a Form" order, put into column of march and looked to get the hell out of Dodge. At this point I saw Si had turned over a "Form" order for the mounted dragoons facing my Dutch Guard. I thought, "He's a bloody mind reader. He is going to form a column to avoid the rough terrain and charge me in the
rear. " Seconds later I realised I had over-thought the situation and breathed a sigh of relief as the
dragoons dismounted to fire on me. 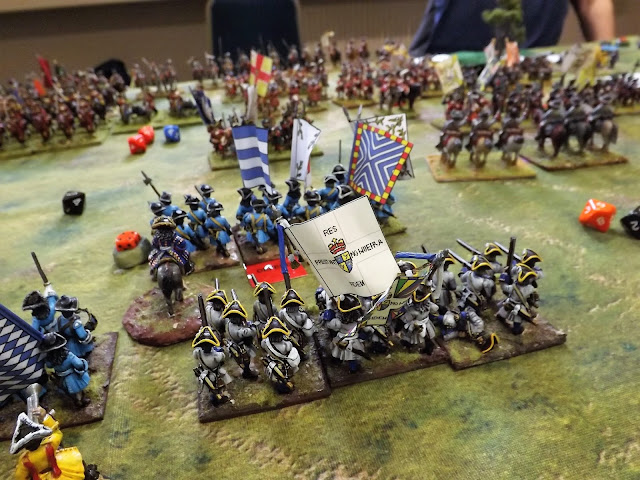 I pulled my cavalry off table, to let Eugene's infantry through. 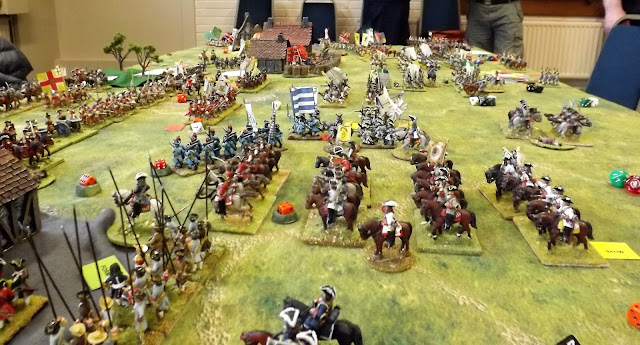 Now the French charged the large village in the centre, got blown away, went back to shooting and
decided this wasn't much fun either. 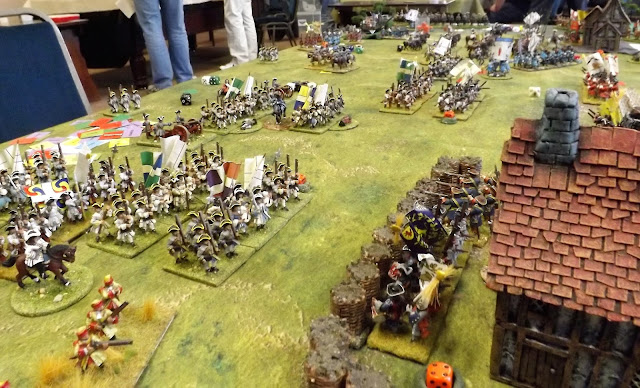 With Eugene's men moving into the built up areas, the French conceded and withdrew. 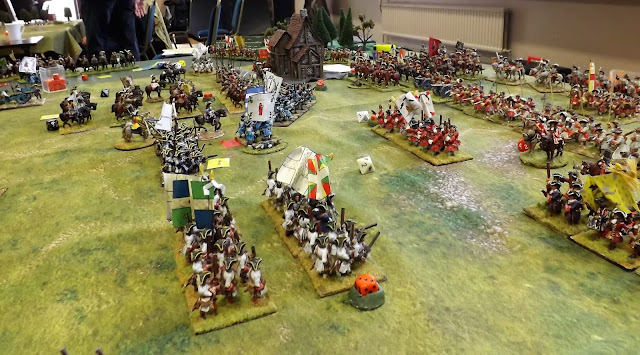 Looks like Vandome and Berwick knew what they were about all those years ago.

Many thanks to Si and Nick for playing in a style that befits gentlemen and to Chas for putting it all
together.

As a first try of version 3 of "Beneath the Lily Banners", things went well, but then I have always liked those rules in their previous incarnations too.

Nice to see all the toys on the table.