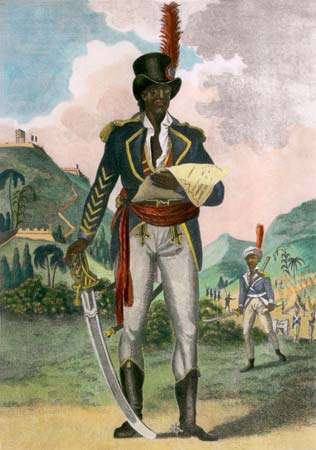 With 25,000 dead and 30,000 wounded British troops (more to disease and the jungle than battle),
the Crown forces decided to abandon all but Port St Nicholas and Ile de Tortue to the revolutionaries
under Toussaint. 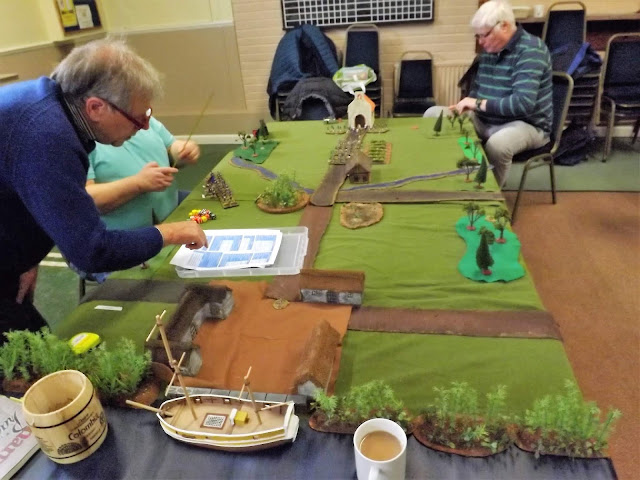 As part of that withdrawal, a force of Royal Marines and black chasseurs, were sent to secure the
Convent of Perpetual Motion and cover the evacuation of the nuns to a waiting Royal Navy sloop.
With this force in position, French trained black infantry could be seen advancing on the convent and
the jungle was alive with freed slaves and Maroon skirmishers. Judging the situation critical, parties
of sailors, more native chasseurs and local militia advanced from the small port to cover the nun's
route to the waiting ship.

As the revolutionary line infantry shook out into line, they delivered an effective long range volley
into the face of the British marines. Not ones to let such a slight go unchallenged, the steady British
line returned the favour. As these two forces settled into exchanging volleys, a mass of freed slaves,
led by a Voodoo shaman, rushed out of the woods. Seeing the threat, the British deployed their
native chasseurs, who settled down to skirmishing with the advancing mass of former slaves.
Maroon skirmishers were now firing on the "Jolly Jack Tars" advancing from the port and taking fire
from more native chasseurs supporting their efforts. After a short exchange, one party of Maroons
remembered an important appointment elsewhere, but three more groups continued firing from the
jungle and swamp. 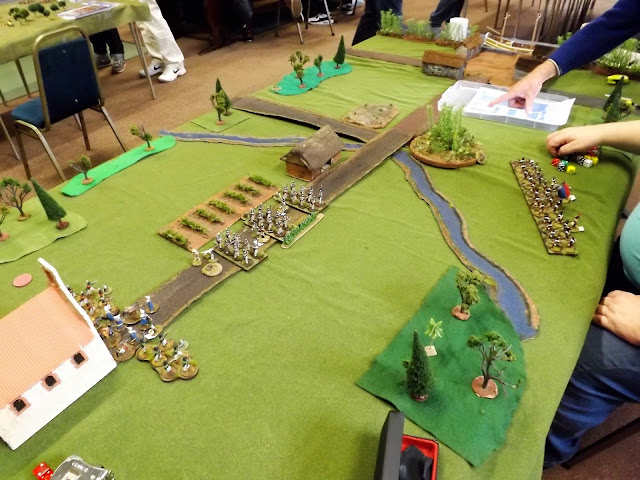 The tars were starting to suffer, but pressed on. Seeing the flank of the enemy line troops in the
distance, they made a hopeful charge. Their dander must have been up, as they flew forward like
demons, sweeping away a group of revolutionary uniformed troops and forcing the rest of the line
into melee. Loses were heavy on both sides and the Tars were routed, but not before they had
severely mauled the best troops the enemy had. 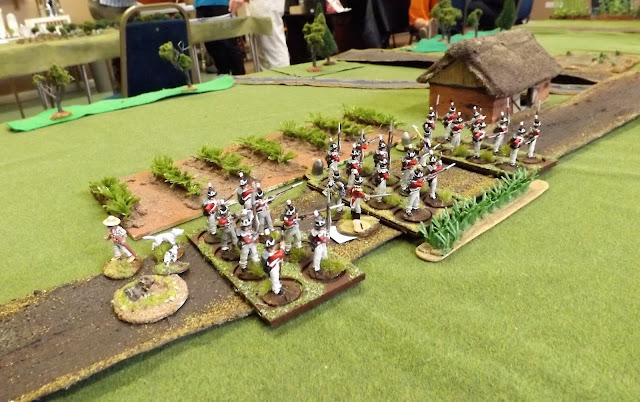 Meanwhile the freed slaves were starting to fatigue as they approached the marines. Skirmish fire
from the chasseurs had caused considerable "shock" in the irregular tribal mass and their advance
slowed to a crawl. The shaman saw the danger, slit a chicken's throat and smeared himself in its
blood, whilst invoking the help of the spirits. His men were greatly encouraged and with their morale
restored, charged. Well I say charged, more strolled really. A result of 5 on 3D6 is not a great roll and
the British line had time to turn to face, but not reload. With the situation critical, the free men were
encouraged to renew their efforts and got into hand to hand combat with the supporting chasseurs,
sending them running. 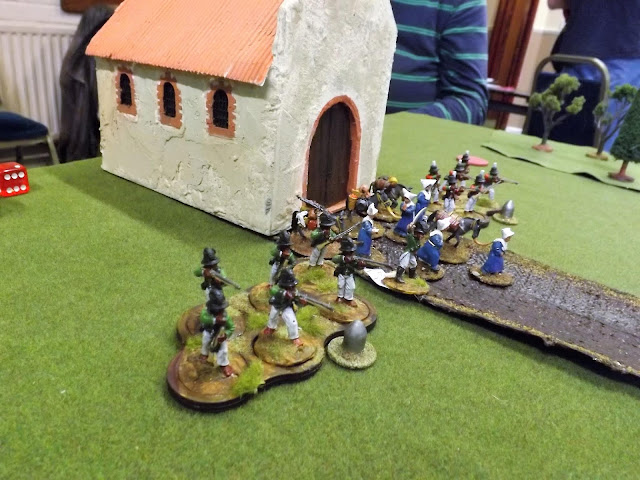 Meanwhile another party of sailors was suffering at the hands of the maroons and decided to fall back. 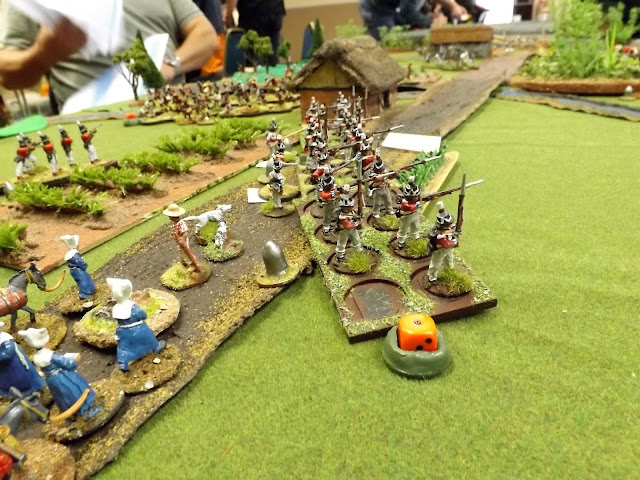 With the situation critical, the British line saw off the charge of the first group of former slaves, but
took loses and fell back. 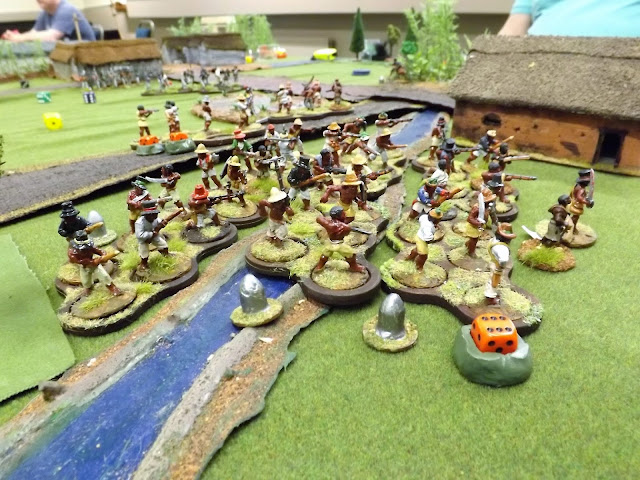 On both sides force morale was a dangerously low levels. The next activation looked critical and a
group of Maroon skirmishers got the drop on the retreating Tars. One volley later, the sailors were
running for their ship and British morale collapsed. 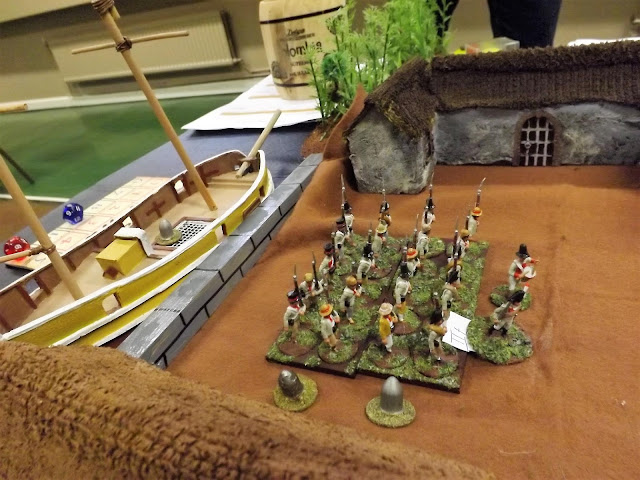 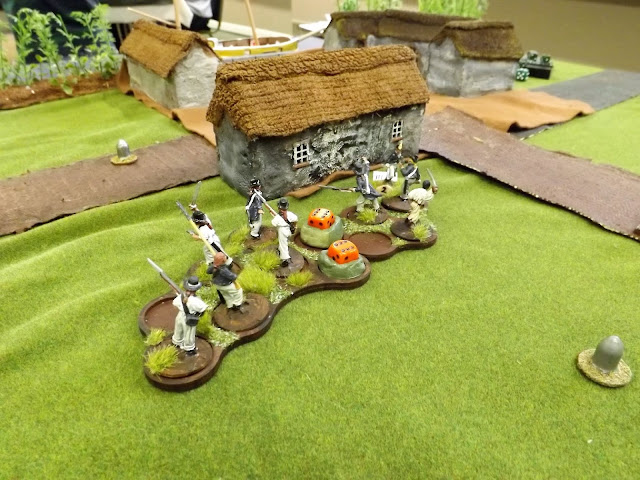 An interesting game to Sharp Practice 2 rules. To be fair things could have gone either way and at
one point the revolutionary side looked to have lost, when the sailors charged their firing line in the
flank. At the end of the day one point separated the two sides morale rating, but it was one point
that counted. 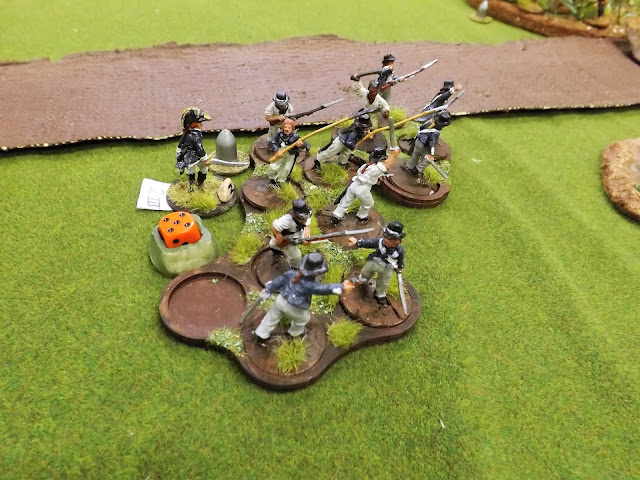 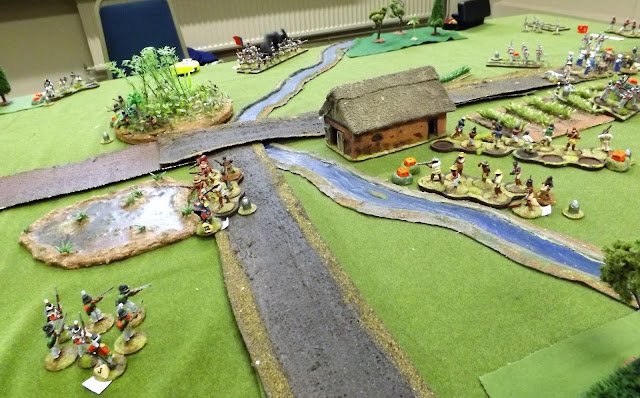 All in all not a good day to be a nun.

Many thanks to Chas for putting on the game. Thanks also to Bob & Chas for gallantly playing the
British and to Nathan for manfully joining me on the side of the valiant free.