The Military Adventures of Dunsterforce - Attack on Bina, 1st September 1918

Since last year the club has run mid monthly meetings in February and March to put on some extra games for those club members keen to get in more than our normal once a month routine.

This was the first of these mid-monthly gatherings I had been able to attend so it was great to see a good turn out from the club to take part in two games, one of which was the one I participated in which was organised by Stephen and Chas focused on the adventures of the one-thousand elite British and Empire troops under the command of  Major-General Lionel C. Dunsterville known simply as Dunsterforce.

This force was sent to the Caucasus on a rather secret and 'hush-hush' mission to secure the rail routes and oil supplies from the region by organising armed resistance to the Ottomans and Germans and supporting groups of locally raised Armenians, Georgians and Tartars. The success or not of the mission was hotly debated in the years that followed the evacuation of the force from Baku on the 14th September 1918 with supporters claiming that there actions cut off much needed oil to the Germans and Ottomans in the closing months of WWI; whilst detractors complained of an under-strength, under-equipped force led by poor commanders, displaying a disappointing lack of organisation, leading to them re-naming the operation "Dunsterfarce" and condemning those involved in command.

The rules and scenario for our game looking at this particular theatre was 'Setting the East Ablaze', a rule set we have played previously in the club back in 2012 when we looked at the activities of Baron von Ungern-Sternberg in the 1920's. 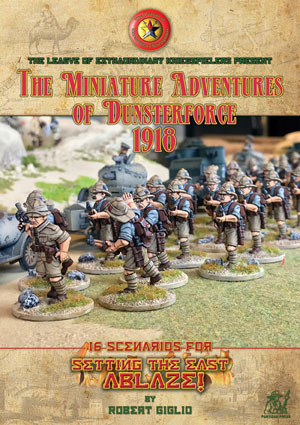 Our scenario was a 'What If" look at the abortive attack on Bina in 1918 designed to obstruct the Ottoman-Caucasus Islam Army who, by taking the village of Bina, were attempting to encircle Baku.

The actual planned attack by British, Russian Bolshevik and Armenian troops supported by a Russian artillery bombardment and armoured cars failed to go ahead as planned against the mainly Azerbaijani militia (Azeri) and Tartar forces holding the village and the scenario assumed that this did not happen and that all the troops were assembled to attack in the wake of the preparatory bombardment.


The British and Baku forces commanded by Ian, Stephen, Bob and Steve M included a company of the Worcestershire Regiment supported by a mix of vehicle mounted machineguns and a Russo-Armenian force of a company of infantry from each nationality supported by a heavy machinegun  and a couple of armoured cars, one with a six pounder gun, not forgetting their pre-attack artillery bombardment.


After the defenders took their positions among the buildings of Bina and in the forward trenches out in the desert beyond, the artillery rounds fell on the pre-selected targets causing early casualties to the Dervish infantry in one of the trenches and knocking out a Turkish heavy machinegun crew supporting the Syrian infantry in the trenches to their front.


As the guns fell silent and the dust started to settle the rumble of engines could be heard beyond the village as the Russian and British vehicles moved forward amid the open order lines of the advancing British and Russo-Armenian infantry.


The advance could be described as steady rather than rapid which allowed Major Pasha to call forward his Tartar cavalry reserve along with their supporting heavy machine gun, leaving the cavalry well back out of harms way as the machinegun team worked their way through the buildings to replace the lost Turkish weapon before the Russo-Armenians could close on the Syrian line.


Looking to cover the advance of their troops the two Russian armoured cars moved up with their infantry line looking to silence any fire from the forward trenches and they rapidly caused the Dervish company, hit by the Russian guns, to evacuate their trenches and find their way back to the houses of Bina.


In response a Turkish HMG opened fire from one of the forward houses and managed to suppress the lead armoured car, provoking return fire from the following vehicle with its six pounder, but surviving the shell smashing into the roof of the house they were occupying.


Meanwhile the Russo-Armenian infantry started to debouch from the scrub cover into more open ground where they were met by the steady rifle fire of the Syrian infantry in their trenches supported by the Turkish HMG, free now to open fire on them having successfully temporarily neutralised the Russian armoured car.


The Russians and their local allies staggered under the heavy fire sustaining multiple casualties, but to their credit charged forward on to the Syrian trench and launched multiple bombing attacks that severely dented the number of troops occupying the defences.


With battle hotly engaged on the Russo-Armenian flank and centre, the Worcesters were able to close on the vacated Dervish trenches taking casualties from the Turkish HMG but able to infiltrate around the flank of the building to successfully close with it and take out the Turkish crew.

The British flank was now threatening to unhinge the Ottoman defences as they closed on the forward buildings of Bina and brought their fire to bear on buildings occupied by the Azeri miltia supported by the six pounder shells delivered by the second Russian armoured car.


The battle had now reached its tipping point with the Russo-Armenian troops now occupying the Syrian trenches and calling forward their HMG to support a further advance into the village and with the British having disposed of one of the Azeri companies in the village, looking to press on with the support of the Russian armoured cars.


During this time the Ottoman forces had also been busy bringing up another HMG crew who manning the buildings directly behind the former Syrian held trench now opened fire on the lead Russian armoured car scoring five out of six potential hits and more importantly converting one of them to a knock out causing the lead vehicle to crackle and burn as its ammunition and fuel "cooked off".


Then from the roof of the same building a Turkish sniper opened fire, wounding the Russian mounted commander overseeing his troops in readiness for their next attack into the village.

The Russian and Armenian troops launched a last fusillade of fire from their trenches before attempting to advance across the open ground and gain a foothold in Bina only to be met by more fire from the Ottoman HMG knocking down more of their number as the Dervish troops started to resist further advances by the British on their sector of the village.

The afternoon's fun was well advanced and the pub was beckoning and as if to emphasise the point the Russo-Armenians took and failed their fifty percent lost army morale test seeing their troops depart the field, taking their remaining armoured car with them.


This left the British and Ottoman forces to test, who both successfully passed leaving the British in an unlikely position of trying to press their attack further with a significant number of fresh Ottoman troops still able to contest any such advance using the cover offered by the buildings of Bina.


Thus we called the game marginally in favour of the Ottoman defenders in what had been a bitterly fought little battle that underlined to all concerned a deep understanding for the hatred displayed towards any machinegunners by opposing troops, given the devastation these weapons were able to deliver in this period.

I have to say I thoroughly enjoyed this excursion into one of the little known conflicts that made up the wider Great War, a period in history that doesn't normally grab me in terms of something I would normally play.

This game featured an array of vastly different types of troops with a wide array of competency and ability not to mention terrain that doesn't offer any favours to the attacker in the face of modern weapons no matter what the quality of the troops wielding them.

The rules were good fun and reminded me of simpler days playing WWII using Rapid Fire in their dice mechanism and referring to figures lost in a particular unit to work out their morale and status tests and with several of us very new to them it was impressive to see how quickly we picked them up and started to rattle through the turns.

That said these rules also incorporate the newer ideas of shock and overwatch together with a feel for the period that makes them quite different and I would happily play them again.


Thank you to Stephen and Chas for pulling the game together and bringing their knowledge of the period and theatre to bear on the game and to Ian, Bob, Steve M and Vince for adding to a very fun game with lots of drama and laughs, and I for one have learnt a little more history from the game we played that is just icing on the cake.
Posted by carojon at 19:51