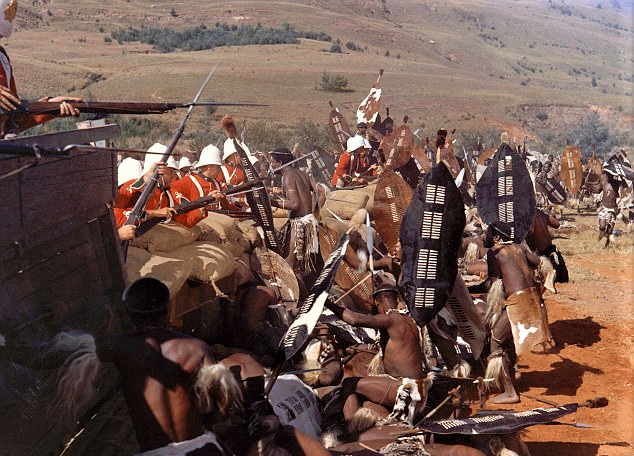 Every now and then you get to play a fun wargame that leaves a marked impression, and a game that seemed a bit different from the usual stuff.
This month at the club, Mel and Lee travelled down from their home in Bournemouth to put on their second game at the club since running their great rendition of The Battle of Pelennor Fields using War of the Ring, back in March 2020 just before we and the rest of the world got used to a new normal and our regular gaming meetings got put on hold. If you missed the report on that excellent game, enjoyed by all who took part, just follow the link below.
Remembering the fun we had and the recollection of the effort and attention put into that game I was very interested and looking forward to seeing what they had come up with for our excursion into the Zulu War of 1879 and more precisely the famous Battle of Rorke's Drift, an action we have played previously at club with various rule incarnations, but this time we would be using Lee and Mel's very own rules designed around the set up seen below which forms the prototype for a potential new game in a box, perhaps complete with figures rules and terrain for those of us who love this colonial wars theme.
So what's different about this particular rendition of such a famous action, you might be thinking, as indeed I was when I sat down to assume the role of Corporal Allen and his brave section of twelve stout hearted lads ready to do or die for Queen and Country.
Well first off the game is designed to very deliberately recreate the film driven images this battle has taken on ever since the release of the iconic film Zulu made in 1964, perhaps one of the best British war films, if not one of the best war films ever made and now a staple of most Xmas or Bank Holiday viewing with a stellar cast of character actors headed up by the late great Sir Stanley Baker as Lieutenant John Chard, Royal Engineers and the up and coming new star back then, Sir Michael Caine in the role of Lieutenant Gonville Bromhead 24th 'South Wales Borderers' Foot.
Given how most modern wargame audiences familiar with the battle would immediately think of the film and all its memorable moments and catch phrases that have become common parlance, certainly among British wargamers gathering around a table for Rorke's Drift; such as the brilliant portrayal of Colour Sergeant Frank Bourne, by another great English character actor, Nigel Green when asked by one of his nervous young privates on sight of the Zulu horde before the ramparts
'Why us sarge?'
'Because we're 'ere lad, now face your front and mark your target.'
Perfectly capturing the stiff upper lip, determination in the face of a desperate situation displayed by the defenders that day in 1879 and their courage no doubt bolstered by a reliance on discipline, drill and training epitomised in the words 'face your front and mark your target'.
The second interesting aspect of the game is that all the players involved assumed the role of key characters from the battle and indeed the film, with each of them having their own particular characteristics to influence the fighting in their area of the table and with the soldiers under their direct command as well as having their own unique combat skills and abilities together with the occasional personal mission, such as Corporal Allen using his personal initiative to rush to the aid of the men trapped in the hospital when set on fire later by the Zulus.
In addition my character Corporal Allen would contribute directly to the combat efficiency of his twelve man section, by the addition of a red (discipline) and blue (combat) dice added to the twelve white dice rolled by his soldiers when shooting or engaged in melee, with a successful score causing him to add to the enemy casualties with his own effective shooting or bayonetting but also making it more likely for his men to cause more casualties by directing their efforts, indicated by a lower score on the white dice needed for their effectiveness at killing the enemy.
Finally the actions of the Zulus and the impetus of their attacks on the defences was all controlled by Lee and Mel as they ran the game, seeing cards drawn to determine British and Zulu special game events each turn, that could cause a positive or negative impact to either side that turn and generate the arrival of Zulu regiments from different board edges throughout the game.
The results of combat would see the effects on the Zulus referred back to Lee as he could check to see what each unit would do in response to being shot at or casualties received, whilst we as the defenders could only look on and wait and see what the reaction to our efforts would be and prepare our response to the Zulu reaction accordingly.

The great thing about the card sequencing of play is that it enables aspects in the film to take effect, nicely modelling the seemingly random attacks by relatively small groups of Zulus early on in the battle as the defences were tested for weak spots, finally ratcheting up following the historical eclipse of the sun that confirmed to the Zulus that victory was theirs for the taking and causing multiple attacks to suddenly generate from multiple directions all at once.

As players focussed on managing the various sectors of our respective perimeter the tension built and calls would go out for support from other less hard pressed sectors or for an encouraging shout from a charismatic leader to help bolster the discipline and therefore capability of a hard pressed unit.
Groups of Zulus could range from two, four or six bases each with eight figures per base and with the game based on a what you see is what you've got, one figure to one man ratio, the small thin line of redcoats could suddenly look rather hard pressed, raising the tension another notch.
Firing on newly appearing Zulu warbands could provoke an immediate charge to a standing chant by the warriors clashing their shields in imitation of the distant train so well imitated in the film.
Knowing when to fire and hold the position or to fall back as supporting units fired on large groups clambering over the mealie bags became a required skill, made more tense when the  'low on ammunition' card came out prompting Commissary Dalton to have to make his way to the affected sector dragging the necessary ammunition boxes to keep the line firing.
Of course success in driving off the attacks was one thing but if our player characters were to imitate their historical ones we needed some heroics to be rewarded with the bucket load of Victoria Crosses the actual action merited and so managing to disperse a Zulu attack was rewarded with a VC and all the players were able to encourage their commands with additional medals as 'the general public don't like to read about too many defeats in their morning papers - bad for morale' card delivered said encouragement and we all rolled for additional gongs for the men - great stuff.
What we as players didn't know, rather like the real life defenders and as depicted so artfully in the film, was precisely when this battle would be all over - you remember the scene as the chanting and singing starts from the Zulus on the cliffs above, leaving our heroes thinking their time was up, only to be told by the Afrikaner Adendorff that they're saluting you! Its all over!
Each game will have its own predetermined ending and so ours reached its ultimate climax as multiple large Zulu attacks crashed into the perimeter from all sides with Colour Sergeant Bourne up on the parapet delivering well timed bayonet thrusts and Corporal Allen forced to abandon his barricade to help the defenders on the other side of the perimeter forced back in the last attack and now down to a handful of defenders.
Allen successfully delivered a telling volley that stopped the Induna led six base Zulu attack right on the perimeter to then have to turn his men about to deliver yet another telling volley that drove out the Zulus that had just charged in on the section of defences he had just pulled back from.
Then just as it looked like the outer perimeter would have to be abandoned with the last escapees evacuating the burning hospital, it was over and the station was held heralding a Zulu withdrawal and for us a well earned pint.
What a battle and with ten VCs awarded for bravery over and above in the face of the enemy we could take time to tend the wounded and prepare for all those after dinner speeches that would be required once back home.

Mel and Lee are to be congratulated on designing such an filmic and fun game capturing all the narrative that this iconic battle deserves and frankly I'm surprised no one has come up with a similar idea previously.
Having played several of these Rorke's Drift battles with other systems this was by far the best and most immersive of them and that's saying something, as we have had some cracking games at the club and reported about them here on the blog. You can get a feel for the game in a short clip of it below as the action started to intensify as the hospital caught fire.
The rules themselves would also likely lend themselves to a big battle version for doing the larger field battles of the campaign and the Zulu activation and response method pioneered by systems such as Pony Wars and Peter Gilder's Sudan rules really work well for these kind of native irregular armies and I know, talking to Lee, that he sees the rules very much as a tool kit designed to have some of the rules used for certain game types and not for others depending on what is needed for that particular game.
I wish Mel and Lee well with developing this idea further as the work they have done to get the game to this stage is impressive and I would certainly be interested in it as the kind of game you could put on quite easily with a group of friends, with no two games ever likely to play out the same and with loads of narrative to chat and laugh over with a beer when the shooting is done.
Posted by carojon at 08:13