This month Chas and I ran a scenario based on ultra modern law enforcement techniques in America.
The mean streets of any mega city are a busy and dangerous place to be. Only the activities of the boys & girls in blue, keep a lid on the many and varied criminal activities being perpetrated.
So it was, that a number of officers of the law had raided a fast food joint, only to find a large stash of the narcotic known as "Umpty Candy". As the officers called for back up, word soon spread of the find. Soon, gangs who knew the value of this haul were converging on the burger joint. 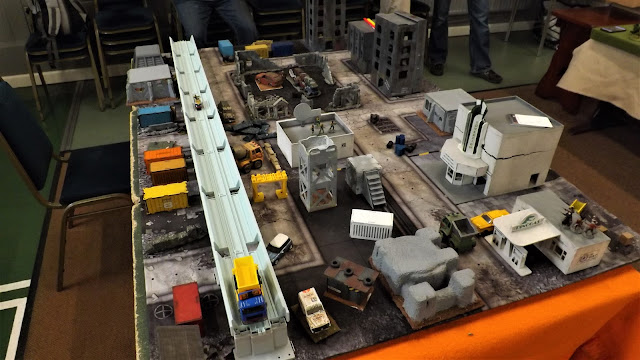 From the North came a gang of Fatties, in their custom skip truck. From the East came the local block gang, bent on retrieving their drugs. From the South, a collection of rogue robots, intent on distributing the candy to influential "fleshy ones" whose lives they wished to ruin. Lastly, from the West, came a gang of Cursed Earth Raiders on grav vehicles and jet packs, well aware of the trade value of Umpty Candy.
The Judges stood ready on the roof of the cafe, looking for signs of any trouble and guarding the drugs that were still stuffed in a bin. 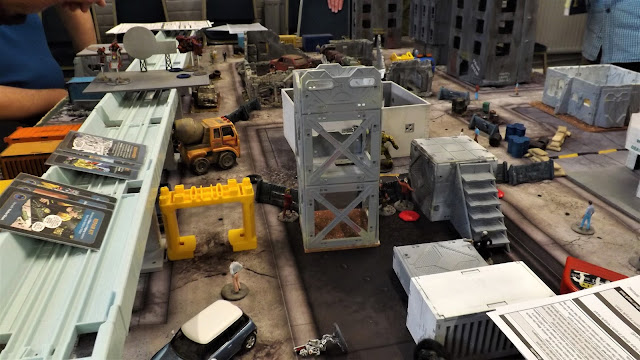 The Judges didn't have to wait long, taking fire from the mutants on a jet cycle. A Judge was down and more fire was coming from the block gang, as the others closed in. The senior Street Judge ordered his team off the roof and prepared to defend the ground floor. 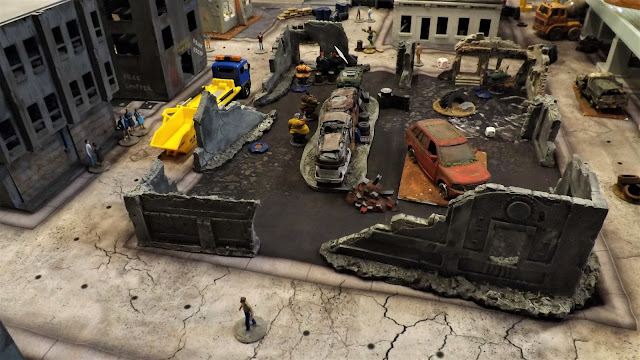 A dispute now developed between the Block Gang and the robots. A Warbot fired a volley of rockets, dropping a ganger, as a hail of return fire struck the Warbot. A loud explosion was heard, as the Warbot ground to a halt.
Elsewhere a skip load of Fatties was dumped on the street and Dick Porker led his gang into the cover of ruined buildings near the cafe. 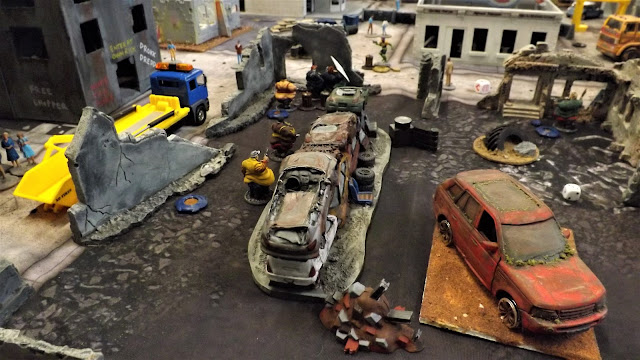 Judges exchanged fire all round, as the Block gang felled a Secbot and the Medibot that came to his aid. One of the Judges firing from a window was cut down.
By this time a Demobot was smashing in one wall of the cafe, as the remaining Judges faced the expected entry point. 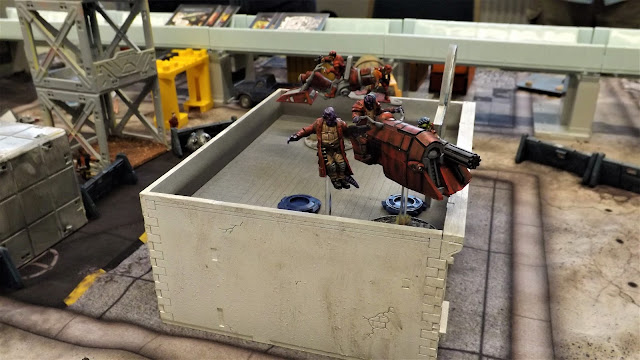 Mutants moved up to launch a stun grenade into the restaurant, badly stunning another judge.
At this point the Block Gang engaged the Demobot and he broke off to fight them. The Demobot moved into hand to hand combat with a ganger. As the ganger dodged, he was cut down by errant friendly fire.
Seeing his chance, the Street Judge decided to make a break for it, dragging the cash of drugs with him. As he made his escape, he was fired on by several mutants. Returning fire he felled one, but was cut down by another.
A mutant swooped in to grab the loot and a Fattie stepped out and fired at him, missing his target. The Fattie was not so lucky, as the heavy spit gun on the sky cycle spread 600lbs of flesh liberally around the area.
The mutants now made a break for it, as Judge reinforcements, led by Joseph Dredd himself, moved into the area. Judge Dredd's bike cannon spoke and pieces flew off a mutant bike, but it kept going.
The Fatties set off in pursuit of the loot (not a very fast pursuit) and played their hole card on the mutants. A whiff of Umpty Candy escaped the bin, stunning a couple of mutants, but not the bag carrier. 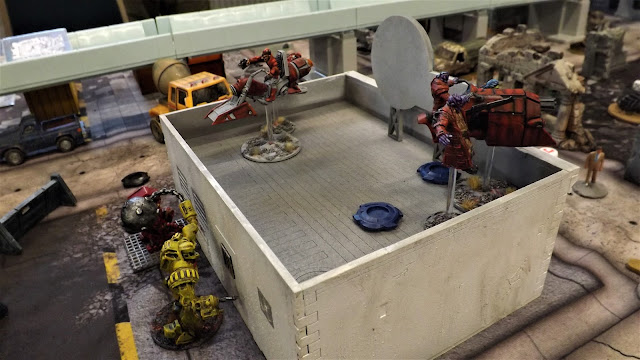 As the mutant leader gunned his sky cycle, he shot off into the distance and away to count his haul in the safety (?) of the Cursed Lands.
Many thanks to Chas, Rob. John and Jason (the winner) for playing in the spirit required for such a game. Chas and I are still arguing as to who got the wooden spoon. I still think it was him!
Special mention to John, playing the robots, who made some of the worst rolls I have seen in a while.
We must do it again sometime.
Vince.
Posted by carojon at 08:37