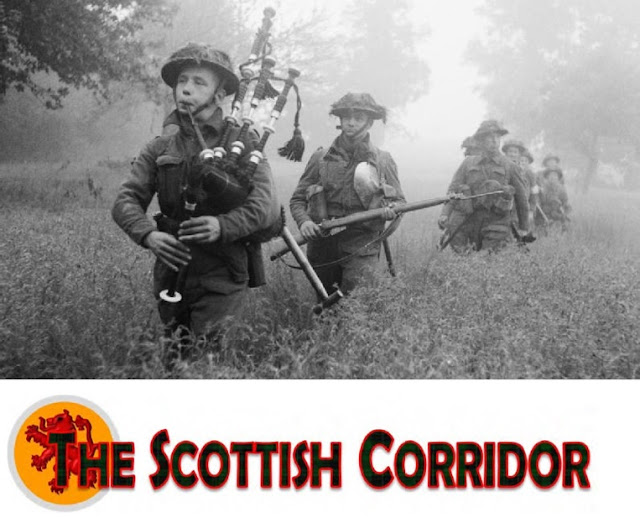 This weekend saw the seventh game in the struggle for the Germans to close off the British southwards salient, the campaign consisting of two German forces taking turns to push from East and West to try and link up with each other across six battlefields. Progress to date has been inFuhriating (pun intended), but the overcautious German High Command have so far been able to blame the lack of advance on being cautious so as not to lose irreplaceable man power for subsequent fights. 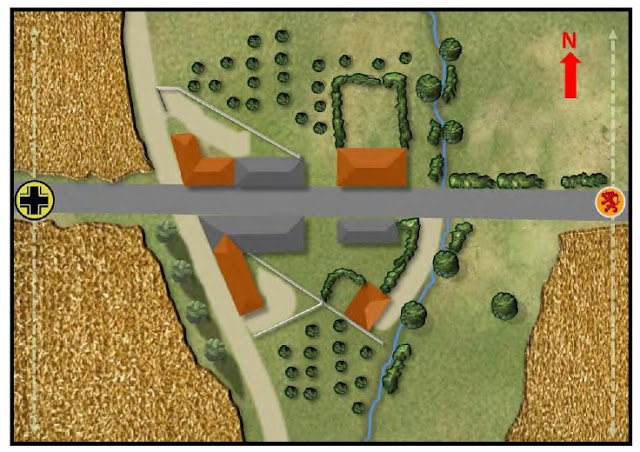 Fighting at Le Valtru (Map 1) for the THIRD time (by this time the Obergefrieter Jurgen Adai was looking over his shoulder for a stab in the back from Fuhrious (again, intended, but probably wearing thin by this point) senior leaders, as well as forwards for those pesky PIAT teams), for once there was no close-support barrage.

Perhaps the British had stopped to make tea? Also in the German's favour I had inadvertently told Nathan he was allowed 10 support points, when in fact it should have been 12. No doubt I will have that hang over my head if I ever win this campaign (there is still a small possibility of that - three tables to win yet over five games), but he was most generous and forgiving when we discovered that mistake towards the end of the game. Ahem... not intended, but a shabby Nazi trick nonetheless.
Ever fearful of the appearance of a Churchill to counter it, 'Weiss Zug' as they have been tagged, got their Flammpanzer onto the table fairly early on.

It then spent a good deal of time hiding behind a garage building, letting several MG42 teams do the hard work. And here's where the second shabby Nazi trick came into play - we sent our 'support' Panzergrenadier squad up as bullet catchers, knowing they wouldn't affect the overall total of men lost for future games. They gave their lives in a Fuhtile gesture (too much?)!
In response, the British started with some fairly predictable deployment, lining a hedge which had been the subject of firefights in previous games, and occupying a building overlooking the same murder zone from an oblique angle. All solid stuff, but in ensuing firefights the sheer weight of fire - not to mention some incredibly Fuhrtuitous (okay, enough now with the Fuhrer references) dice rolling saw their gradual depletion over these handbag fights.

Once the Flammpanzer finally flanked these pesky squads, the British did what they usually do and had a smoke after making their tea. Lots, and lots of smoke rounds from their light mortar served to force the German forces to push further forward to try and flank them further up towards the bridge.

Setting up nicely to have another 'MG vs Bren' piddling contest across a back garden, what did those devious Brits do? They whipped out a Vickers MMG right on the far side of the bridge, suppressing, de-pressing, and eventually regressing at least three MG teams and a le.IG 18 gun unit.
Having survived two attacks from a PIAT team (again, the British dice gods were still distracted with the tea leaves at the bottom of their mess tins rather than lending a hand) the Flammpanzer decided to go through the back garden and try and flank the now several teams that were lining the original hedge.

Lo and behold, up pops another PIAT team! 'Fuhw!' said the tank crew (sorry, had to do just one more) as they rolled enchanted save dice for long enough to hose the Vickers, a Senior Leader, a rifle section and a mortar team with burning kerosene. It took a good long while (Senior Leaders are difficult to kill aren't they?!) but eventually the British decided that going home for cocoa and medals would be preferable to staying and fighting.
It was, at last, a German win so we won't have to fight over that blessed stretch of road a fourth time! There's no doubt though that without the superb tactical input from Neil, and shockingly unfortunate (for the Brits) save rolls - not to mention my inadvertent deprivation of 2 British support points, my mediocre tactics would not have borne the sweet fruit of victory on any other day.
Thank you to Nathan and Neil for such an entertaining game which even managed to make up for the 90 minute delay on the M5 which made me late in the first place.
In testament to the absent British dice gods for poor Nathan this game, I leave you with a photo of one of his last rolls. Having been reduced to just two command dice, he then rolls double six giving him the next phase (but no dice to do anything with it)! 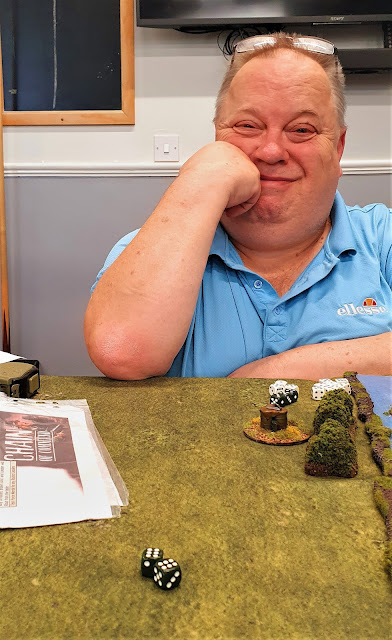 AAR by Mike Robinson.
Posted by carojon at 06:48